"For Whom the Bell Tolls" - John Donne

You are probably thinking, Ernest Hemingway and his famous novel, "For Whom the Bell Tolls," right? Well Hemingway took the words from John Donne for the title of his novel as the bells were tolling for Jordan, his hero and protagonist in his novel. But, exactly in what writing did the words originate? They originated in John Donne's prose essay, Devotions upon Emergent Occcasions: Meditation XVII.

John Donne was a 17th century English poet, satirist, lawyer and Protestant priest. In his younger years, he lived the life of an English rake, womanising, drinking, recreational pursuits and pasttimes, and travel. He had a great time and wrote about it in his sensual love poems. Many of his poems are to or dedicated to his mistress of the moment. But, in 1601, Donne secretly married Anne Moore, had twelve children with her, and became a changed man.

After being imprisoned for a while by Anne's father, who was against the marriage, he came out poor and having to provide for a family. Donne's and Anne's marriage was a happy one, but gone were his carefree days as a bachelor. Now, he had to find more serious pursuits.

By 1615, he had become an Anglican priest and although he didn't want to take the orders of a priest, he was forced to do so by King James I who insisted he do so. By 1621, Donne had been appointed as Dean of St. Paul's Cathedral in London and would hold that post until he died.

Because life became a more serious struggle from him, Donne's poety and writng reflected this. His later poetry and writings developed a more somber and pious tone and reflected the increasing gloominess and depair he was feeling. The tone of his writings changed to reflect the negation and hopelessness he sometimes felt. Also at this time, Donne experienced ill health, which also entered as a factor into his writings.

Being the Dean of St. Paul's Cathedral, he had many occasions to write prose sermons and meditations for recitation to his congregation. Although he wrote poetry until his death, and is considered the finest of the metaphysical poets of 17th century England, his prose writings cannot be ignored. One of his most frequently quoted is the Meditation XVII.

In the Meditation XVII, Donne writes great ornate prose. At the time he wrote this, 1624, he was quite ill, and in this meditation, he talks closely of dying. This is one of his serious moments when he contemplates his own death. Bells tolling in the area both literally and figuratively, were to Donne, summons of his death to come. (He did not die until 1631) Therefore, this is the subject of his Meditation - the bells tolling meant his death was imminent.

In this Meditation, Donne talks about what should concern him and all mankind when faced with the tolling of the bell. When a child is baptised, he said, the action concerned him, and, therefore, when a man is buried that concerns him, too:

"all mankind is of one author and is one volume, when one man dies, one chapter

is not torn out of the book, but translated into a better language; and every chapter

must be so translated."

Donne goes on to state that God's hand is in everything. The bell that tolls for worship and the sermon, calls not only the whole congregation, but also Donne who is brought near the door by his sickness. When one hears the bell, whether someone from the congregation or Donne himself, each one is united with God. Donne states:

"No man is an island, entire of itself; every man is a piece of the continent, a part

Just as a piece of earth is washed away from the European continent by the sea, Europe is the less for it, and, therefore, with each man's death, we are the less for it. And he continues:

"Each man's death diminishes me because I am involved in mankind, and therefore

never send to know for whom the bell tolls; it tolls for thee."

According to Donne, we are all connected - a piece of the main - therefore, we should mourn each man's death as if it were our own. Donne goes on to say that affliction is a treasure we should all be glad to have, because we are made fit for God by affliction. Through affliction and tribulation in our lives we are brough closer to God and we learn that God is our only security.

As you can see, Donne's words and message of his Meditation are far from the sensual poetry he wrote in his younger years. Although, I have an appreciation for all of Donne's poetry and certainly his metaphysical conceits, this Meditation piece is by far my favorite of Donne's. We learn from Donne that when the bell tolls, be concerned for whomever it tolls, because, since we are all connected as mankind, it really tolls for each of us. We need to love and take care of each other.

Source: The Norton Anthology of English Literature, Volume I. 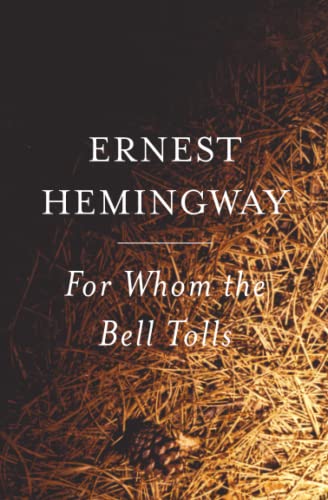 For Whom the Bell Tolls
Buy Now