What is Found Poetry?

There are poems hidden all around you—if you know how to find them. Look carefully, with a creative eye, and the result is “found poetry.”

Found poetry is based on an existing text—a page from a book, a newspaper or magazine article, a letter from your insurance company, the classifieds, an advertisement, a label from a package, etc. The poet transforms the text in some way-- for instance, blacking out or omitting some of the words, changing line breaks, or adding/removing punctuation--to create a poem.

As always when writing poetry, poetic techniques are used to convey a sentiment or message.

Blackout poetry is a very popular form of poetry.

The poet takes a text, a newspaper article for example, and a black marker pen.

The poet first decides what words from the text will be selected to create the poem. All the other words are then blacked out.

The position of the words on the page is as important as the words themselves. The end result is both a literary and visual work of art. It is the literary equivalent of a collage.

With this type of poetry, the final poem may or not have any relation to the topic in the source document.

The adjacent blackout poem began as a review of a play. it appeared in my local newspaper, The Orlando Sentinel.

I used a black magic marker, but any color marker can be used as long as it is dark enough to obscure the unwanted text.

One of the best known practitioners of this type of found poetry is Austin Kleon. His poems are available in book form or as framed art works.

I’m coining the term “holistic found poetry” to distinguish it from blackout poetry.

Holistic found poetry takes the source text as a whole, adds or deletes no words, and relies on line breaks and punctuation to create the poems.

A well known practitioner of this form of found poetry is Hart Seely. He has compiled two books Pieces of Intelligence: The Existential Poetry of Donald H. Rumsfeld and O Holy Cow!: The Selected Verse of Phil Rizzuto. 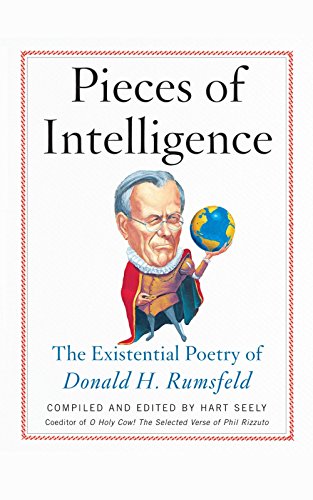 Here is an example taken from the Seely’s book on Rumsfeld, based upon one of Rumsfeld’s most famous statements about knowns and unknowns.

“News Print Poetry” is my unique form of found poetry, a combination of holistic found poetry and blackout poetry. This form challenges the poet to create a poem by creatively selecting words from news stories or other items in the newspaper. In addition to news articles, I used advertisements, the classifieds, the horoscopes, the TV listings, comics, advice columns, letters to the editor, calendar event listings.

I made up a set of rules.

In the waning days of 2011, I set a challenge for myself: I would create a “news print poem” every day throughout 2012 using my local Central Florida newspaper, The Orlando Sentinel, as the source document.

Every day, every single day, for a year, for a whole year, I wrote a poem—and 2012 was a leap year, giving me an extra day. Some days I wrote two or three poems because I was inspired by something in the newspaper. I ended the year with about 400 poems. Taken together, they are a retrospective of the year. It is fun to go back and see what was happening on a particular day back in 2012.

When searching for something to use for my poems, my first choice was a page-one story. However, often the best story to use was buried in the interior of the newspaper. I wanted a story that had emotion or humor or both. I also needed a story which gave me something to work with-- interesting imagery, alliteration, or rhyme. (Better yet, all three.)

Finally, I looked for importance or relevance. Although the topic was often about Central Florida or Florida, I asked myself if it would be interesting to national or international audiences before choosing it. Additionally, I wanted a topic that would still be interesting a year later or even ten years later.

Some days, writing the poem was quick and easy. Other days, I spent hours on it. I often had a frustrating day because I had to abandon one or two attempted poems when they just weren’t working.

Some days the poems seemed to be exactly as I would have written them if I had no restrictions at all. Other days, the poems felt a little clunky because of the restrictions. I confess, just a very few times, I added a word or changed the order of a few words. I rationalized that a good poem was more important than adhering to my rules.

A fringe benefit of this project was that I became very well-informed because I had to read the newspaper closely to find something to use for my poem. I learned about a lot of things that would have probably passed right by me if not for this project.

The topics ran the gamut of the type of stories you see in newspapers—politics, crime, events, holidays, sports, health, science, education, accidents, food, celebrities, etc. A little bit of everything, just like in your local newspaper.

I put the poems on my blog, News Print Poetry 2012. Having the blog helped keep me on the task. Every day, I not only posted the poem, but I added a comment, and found a picture to illustrate the poem. When I compiled the book News Print Poetry: The Best of 2012 at the end of the year, I was sad that I could not include these pictures in the book. Sometimes the pictures added so much to the poem, either enhancing the meaning or sardonically commenting on it.

Even though the project is complete, I update the blog every now and then when I see something in the newspaper that inspires me to do another news print poem.

Other Forms of Found Poetry

There’s another form of found poetry—the Cento. The cento is created using only the lines from other poems. The lines chosen must stay exactly as written—no changes, no omissions, no deletions. The lines can be from the same poet or different poets. The source of each line needs to be credited at the end of the poem.

This technique can also be used by just taking random lines of text from anywhere. For instance, you could use lines from billboards you pass on a trip. (If you are the driver, have a passenger write them down.)

The Importance of Attribution

Found poetry is subject to the terms of “fair use.” You may use of quotations from other works (poems, books, newspapers, magazines, etc.) if these quotations are altered into a poetic form that adds value due to significant imaginative or intellectual transformation. Full attribution should be given.

Sometimes, as with many blackout poems, the source material has been altered to such a great extent that it is no longer recognizable, consequently, in these cases, you may use your judgment about attribution.

In addition to my own blog, News Print Poetry 2012, you may want to take a look at these blogs, websites, and online journals.

There are also many books about found poetry.

What is Your Opinion?

Do you think found poetry is legitimate poetry?