Nell is an Author and Writer. Her books are available on Amazon Kindle and Paperback.

You Couldn't Make it Up!

They say, write about what you know. And boy, did I do that!

I didn't really have any idea that the life I lead would end up on paper. But I got to thinking one day of just how weird my life up until now, had been.

The first of the two books, GYPSIES, came about because we were all sitting down outside one day, eating a barbeque and having a laugh at all the stupid things my other half has done throughout the years.

From wearing a white suit at a Moroccan wedding and being mistaken for the bridegroom, which nearly caused a catastrophe because the father of the real groom nearly started a fight, to building an aviary out of stolen wood so the police pulled it down, therefore letting all the birds out!

Some of the things could and did curl my hair. Literally.

So, I started to jot it all down. And to my astonishment, it turned itself into a book.

GYPSIES: I married a Romany!: Honest, raw and extremely funny!
My first book in the GYPSIES series. When Nell married a Gypsy little did she know what she was getting into! 'Fab book. I couldn't put it down. I cried with laughter at some parts. A lovely tale, definitely worth the read.' Amazon Review - Evelyn
Buy Now

Alby and Janey 'Other halves' Uncle and Aunt

My Mother Preferred a Doctor

Thinking back, it did take me a while to realize that my life with Jake (his name in the book) was, well, pretty weird compared to other peoples!

I suppose picking up a guy you only see once, and then finding out later that he was a Romany Gypsy, was a bit strange.

Of course, my mother nearly had a corona. Heart attack to me and you! She wanted me to marry a doctor so that she could have medicine 'on tap' so to speak.

My dad, bless him did like my choice of husband. That was after he had stopped laughing of course!

Yeah, funny dad. No, he isn't going to park his horse at the bottom of the garden. And no, the scrapyard was still up the road, and not in my front room.

Well, that was the theory.

Of course over the years the scrap did end up in my kitchen, but that's another story! 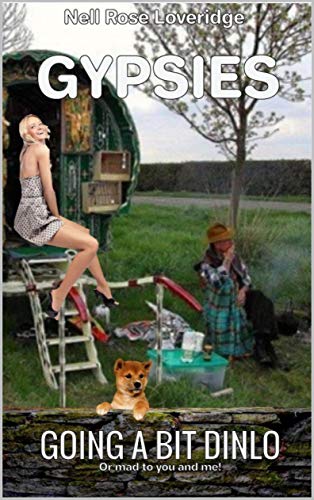 GYPSIES 2: GOING A BIT DINLO
It's six years on, and still as mad as ever! Deciding to move into a house isn't Jakes's best idea. But it's still laughter, all the way. Until the real-world steps in. When racism, jealousy, and a terrifying ghostly visitation happens, Nell and Jake wonder if moving into a house wasn't such a good idea! 'Made me cry with laughter. And the darker side was fascinating to read. Loved it!' pre-reader - Sara Thomas
Buy Now

Other half and family

The second book, or sequel as we posh authors like to call it, came from a telephone call between 'other half' and his brother Ted.

I wasn't listening in, honestly.

But the way Ted yells down a phone is anybody's business. Literally!

I told my friend this one day.

'Ted yells down the phone.'

'Yes, well your 'other half' is even worse. He thinks the phone is two cups and a piece of string!'

And of course, she was right.

Anyway, back to the point. Ted was chattering on, talking to himself more than others, when he said in a very loud voice,' 'Wos up wiv you? you going a bit Dinlo?'

Which in plain English means, What is wrong with you, are you nuts?'

And that was that.

The title of my second book!'

Trouble was, did I have enough madness to put in the second book?

And of course, the answer was yes.

My two-book series. Or maybe three? Is there room for three? I will have to sit down and figure that out.

Anyway, here they are. For your enjoyment. Or not. Erm!.