Analysis of Gender Roles in Berger's "Ways of Seeing"

In John Berger’s collection of essays, Ways of Seeing, he focuses a lot on the role of images, pictures, and art in society. In the third essay, he compares the way men and women act and are viewed with images. Berger’s metaphor enables the reader to think of gender roles in a new light that is easily understood. By comparing men to images that must assert their importance and women to viewers of images of themselves, Berger is revealing a central difference between the expectations of men and women in society. He is emphasizing that men are expected to bring a valuable trait to offer to the world, while women are expected to monitor their actions and micromanage in order to make a presentable image deemed acceptable by society.

Berger’s comparison of men and women is rooted in his study of art and images. He says men are only valuable in relation to what they can offer: “A man’s presence is dependent upon the promise of power which he embodies…. The promised power may be moral, physical, temperamental, economic, social, sexual – but its object is always exterior to the man” (Berger 45). This is similar to the way an image’s value is determined, which is through the picture it portrays. Conversely, a woman’s value is based on the inner meaning and connotations behind her presentation and actions: “By contrast, a woman’s presence expresses her own attitude to herself, and defines what can and cannot be done to her…. There is nothing she can do which does not contribute to her presence” (Berger 46). Rather than basing value on a general, outward impression, women are judged based on their “gestures, voice, opinions, expressions, clothes, chosen surroundings, [and] taste” (Berger 46). Every thought and action of a woman is scrutinized for meaning, similar to the way images are scrutinized by art critics, who sometimes ruin art by digging too deeply for meaning. In addition, women must monitor their actions to manipulate the way in which they are interpreted, causing them to judge themselves as an outsider, rather than just being able to live out their own feelings, unrestricted: “A woman must continually watch herself. She is almost continually accompanied by her own image of herself” (Berger 46). In comparison to an image, a woman is both a painting and its critic, whereas a man only has to be a painting with surface-level meaning.

This double standard in perception of men and women in the eyes of society has caused much unrest and unhappiness. As a woman, I can attest to how exhausting it is to attempt to keep track of both my own feelings and the potential perceptions of those around me. Such perceptions could be based on things that I don’t even notice about myself, such as a habit that a stranger may find annoying or a stain on my shirt that I have yet to discover. Worrying about the opinions of others can be a serious source of anxiety shared among girls and women throughout society: “From earliest childhood she has been taught and persuaded to survey herself continually” (Berger 46). This breeds in women emotional problems, self esteem issues, and eating disorders, among other negative consequences. The “ideal” image to which women feel obligated to compare themselves and live up to is compounded by modern media, which often displays unrealistic representations of women. Doing so promotes unhappiness and encourages women to be discontent with themselves. Unfortunately, it is difficult for women to overcome the ingrained desire to view themselves objectively and harshly in order to favorably influence the opinions of strangers. By describing this double standard, Berger is bringing to light a major issue in the way society views men and women under different standards.

Do you agree that the gender roles enforced by society match those described by Berger? 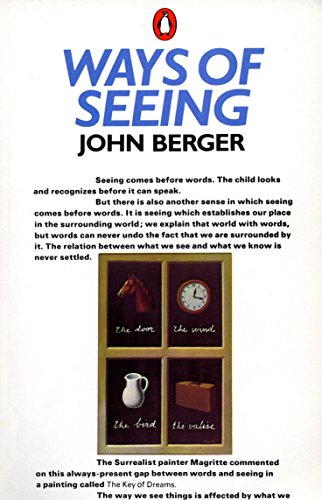 Ways of Seeing: Based on the BBC Television Series (Penguin Books for Art)
Buy Now