Ghazis, Mujahideen, and Taliban: A Review of "Butcher and Bolt" by David Loyn

"The Afghan will bear poverty, insecurity of life; but he will not tolerate foreign rule. The moment he has his chance, he will rebel." - from the 'Lawrence Memo' 1867.

For 200 years Afghanistan has been like a sore on the body politic of the west, a sore which they just HAD to pick at. (I mean no disrespect to the people of Afghanistan - just to the obsessive-compulsive behaviour of some western politicians!). And we all know what happens to a sore that gets picked at - it doesn't heal, it just gets worse.

Western policy towards Afghanistan was determined, and still largely is, more by factors outside of the country than within it. And this policy, right up to the present, has led to a long list of expensive failures.

Butcher and Bolt (Hutchinson, 2008) by experienced foreign correspondent David Loyn provides insightful evidence of what has caused the failures.

In the 200 years of foreign involvement in the affairs of Afghanistan huge amounts of money have been spent, large numbers of lives have been lost, in a quest to force western concepts onto a country not very receptive to such ideas.

In the process lessons were learned and forgotten, only for them to have to be learned all over again. Butcher and Bolt tells the story of successive attempts to subdue the tribes and warlords and bring the country under the control of the great powers.

In the 19th Century Imperial Britain, at the time the most powerful and wide-spread empire in history threw people and other resources into the effort, fighting three wars on Afghan soil.

In the second half of the 20th Century the Russian "Bear' invaded Afghanistan to prop up a communist leader, and then found themselves mired in a sticky mess they could find no way out of for nearly ten years.

Then came 9/11 and the "War on terror" which entailed the US-led attack on the Taliban. After the defeat of the Taliban western troops are still bogged down in Afghanistan in the attempts to find Osama bin Laden and at the same time prop up President Hamid Karzai.

Each successive attempt to impose a primarily "western" regime on Afghanistan, it seems, ignored previous experience and started as if "de novo".

Elphinstone's mission - the start of the 200 years

It was Napoleon's "embrace with Tsar Alexander on a raft in the centre of the river that divided their armies at Tilsit" that alerted the East India Company to the vulnerability of their holdings in India to attack from the west.

The company sent 29-year-old Mountstuart Elphinstone to find out from the reigning King of Afghanistan, the Amir Shah Shuja, what his intentions regarding India were.

Elphinstone travelled with 600 camels and a dozen elephants all laden with gifts. He met Shah Shuja in Peshawar early in 1809 where he was "dazzled by the jewels" worn by the Amir, jewels which included the famed (infamous?) Koh-i-noor diamond.

Loyn comments: "It was the beginning of a relationship that would lead directly to Britain's worst defeats in two centuries of imperial power in Asia."

In what could be seen as a portent of all that would bedevil the relationship and the future of British aspirations in Afghanistan, while he was conferring with the King his men were not being very successful in handing over the gifts they had brought. Loyn writes, "Not only were the camels bearing the gifts taken by force by the amir's men, so were other riding camels that had come in (to the welcoming ceremony) by mistake."

Travelling with Elphinstone was a surveyor by the name of Lieutenant John Macartney. Macartney drew a map of Afghanistan but, as he did not get into the country himself, he had to rely on reports from others to do so.

Afghanistan therefore remained "wild and strange", an "imaginary country - an Afghanistan of the mind."

Loyn write that Macartney's "perspective would come to dominate European thinking, in particular military thinking, about the land across the Indus for a century."

"Nowhere," Loyn remarks, "does geography more define war than in Afghanistan." And the geography was largely imaginary, a mental construct. 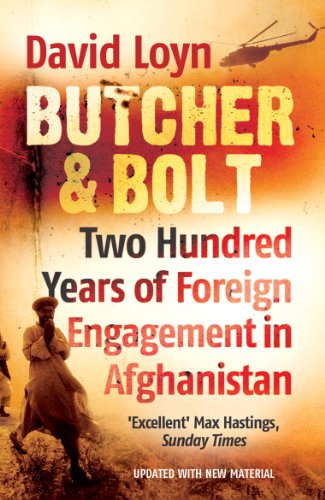 For the next 120-odd years Afghanistan was a pawn in the endless imperial maneuverings of Britain and Russia. Each great power distrusting the other and trying to outwit each other.

Russia's first move in the great chess game came in 1840 when the British were heavily engaged in Afghanistan and so was unlikely to be able to counter the Russian move. The move was to send an army with 10000 camels to attack the small country of Khiva just to the north of Afghanistan.

The Russian army did not even reach its destination, beaten by the vast expanse of the steppes and the winter weather. The Russian force lost 800 men, most of the camels and horses, and turned back in chaos.

Loyn notes that "At the heart of the Great Game was trade." An estimate of the trade of the two great powers out the value of Russian goods in Kabul at 200000 rupees and that of British goods at 300000 rupees.

Interesting facts along the way

This book has some really interesting and, to me at least, hitherto unknown facts. A few of them:

Two hundred years after Elphinstone's meeting with Shah Shuja, another western envoy met an Afghan leader in the same town, Peshawar. This time it was US Congressman Charlie Wilson who met Gulbuddin Hekmatyar, a leader of the mujahideen guerrilla's fighting the Soviet occupation of Afghanistan.

Loyn describes Wilson opening the door to his Afghan guest, a meeting which would have more immediate impact on the country than Elphinstone's meeting 200 years before:

"Behind Wilson, climbing off the bed to greet the Afghan guest, was a former Miss Northern Hemisphere no less, known as Snowflake. Not wanting to expose too much flesh in this conservative Muslim town, Snowflake was covered up. Her version of modest was a pink nylon jumpsuit with a zip that ran from neck to navel, and the footwear she thought would put the Afghan visitor Gulbuddin Hekmatyar at his ease were combat boots, chosen because he was a warrior ..."

Thus was the US funding of Muslim fundamentalists begun, which would in the next two decades bog the world's most powerful military down in a battle against fighters they had themselves largely armed and financed.

This book is an entertaining and yet deeply troubling book. It throws into the spotlight issues of religion and nationalism, fanaticism and bravery, that continue to plague the West's engagement with the diverse peoples of the country known as Afghanistan.

The west, and in particular the US, has thrown masses of money and material at the country to seemingly little avail. The British tried to prop up rulers who were amenable to British interests in Afghanistan, the Soviets tried to prop up a ruler who they thought would make Afghanistan into a client communist country, and now the US and Britain (again) are trying to prop up a government that serves their interests.

The likelihood of failure is again rather high.

You ask where the title of the book comes from? Well the British response to the Pashtun Code of Honour, or at least to the violent effects of it, was to raid villages in quick sorties and get out again having done as much damage as possible - hence the policy became known as "butcher and bolt."

This book is essential reading for anyone wanting to gain a deeper insight into why the war in Afghanistan looks so hopeless and so unending. It is well written and well illustrated (all the illustrations on this Hub come from the book).