Grit of Women by Jack London

A Couple's Tale Of Survival

Grit of Women by Jack London recounts the events that happen in a turn of the century prospecting town in the frozen northlands. When the Klondike town of 40 Miles is facing starvation it is up to Sitka Charley and his purchased wife, Pussak to go for help. It's a daunting, suicidal mission but one that must be made if anyone in the settlement is going to survive the merciless winter months.

What makes Jack London's story Grit of Women even more poignant than it already is, is that it just might be true. It has been well established that London used real life people and real events to base many of his stories on and the character if Sitka Charley shows up in more than one of London's tales of the Klondike. Could this tragic tale of love found and love lost possibly be true?

An Homage To Women

Jack London's short story, Grit Of Women, is obviously a salute to womankind whom London held in extremely high esteem. Although his childhood relationships with both his own mother and grandmother was far from intimate, he adored his nanny, Virginia Prentiss, and remained close with her for the rest of her life. When London reached the Klondike himself, some of the first stories he heard was of the native women and of their extreme 'grit' and loyalty. Toughness was one of the things that London, a noted adventurer himself, admired in anyone and doubly so in a woman for it just added to their stock in his mind. Jack London was clearly a great admirer of women and their strength.

Grit of Women is also another clear demonstration of Jack London's love of being in love. His own daughter has been quoted as saying that London's childhood lacked affection from his mother and probably caused her father to be in love with the idea of being in love. Great writers write from what they know, from their own experiences so it makes sense that London would try to satisfy his need for a world in which romantic love was an all powerful force through his stories.

SPOILERS BELOW! - skip to next module to avoid Spoilers

In this story, Puauk, the native woman that Sitka Charley takes as his wife, is so in love with him, so utterly devoted to him that she not only starves herself to death but also refuses to feed her own starving brother so that her husband may go on living. Yowsers that's love.

Though Jack London is famous for his novels, short stories, and essays, he also tried his hand as a playwright. Success in the theatrical world eluded him, however. He managed to publish a handful of plays during his career, but none were considered worthy of production during his lifetime. Scorn of Women, one of these forgotten plays, was published in book form in 1906. It is an adaptation of an earlier short story of the same name which is included in London's 1901 collection The God of His Fathers. While the original story is quite entertaining and engaging, much of its charms have been lost in translation for the stage.

Floyd Vanderlip has struck it rich in the Klondike Gold Rush. Not only does he enjoy an abundance of wealth, but he also finds himself with an abundance of women. He is all fired up to leave Dawson with a Hungarian beauty, but two other ladies try their utmost to hinder his departure. The lovely and respectable Mrs. Eppingwell, despite having a husband, begins to show an interest in him, as does Freda Moloof, a gorgeous Greek dancer and reputed man-eater. Little does Floyd know that the sudden outpouring of affection from these two beauties is only a ruse meant to detain him from fleeing with his mistress, just long enough for his fiancée Flossie, en route from the lower 48, to arrive in Dawson and claim her man.

Many of Jack London's stories seem to have a lot of messages in them but perhaps, more accurately, he was just doing what the best writers do and that is to write their truth, the things that they believe in. London wrote about people and their character as demonstrated in their circumstances, usually hardship and adversity, two things that London knew very well himself from an extremely young age.

By all reports, Jack London was an unselfish kind of fellow who was generous and gave freely. He admired people who were selfless and in this short story, Grit Of Women, he reveres that quality. Sitka Charley volunteers to embark on an almost impossible mission to give the community of 40 Mile a chance to live.

On the reverse side, London illustrates that even Sitka Charley has been selfish in a way, by taking his wife for granted and that she, above all others in this story, is the most selfless of them all and therefore deserves the greatest admiration.

A Lesson In Marriage

Happily married himself, Jack London seems to be expounding one of his tips for making a marriage work in his short story Grit Of Women. The moral seems to say to us clearly, don't take your partner for granted. Don't overlook them and the many things they do for you each and every day because life would be a lot more difficult without them beside you. Be appreciative. Be attentive. Don't be self absorbed and entitled the way Sitka Charley is when he first marries his wife. At fist his heart is cold to her because he buys her more like a dog than a bride. He needs help along the trail and he sees her as a slave instead of a companion.

SPOLERS! - skip to next module to avoid spoilers

But then, after he begins to appreciate all of the wonderful things she does for him and he starts to recognize her amazing qualities, he grows to love her and realizes how much time he has lost with her.

Own Grit of Women by Jack London 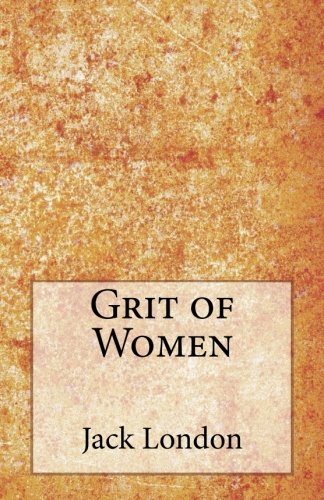 Grit of Women is a short story by Jack London. John Griffith "Jack" London (born John Griffith Chaney, January 12, 1876 – November 22, 1916) was an American author, journalist, and social activist. He was a pioneer in the then-burgeoning world of commercial magazine fiction and was one of the first fiction writers to obtain worldwide celebrity and a large fortune from his fiction alone. He is best remembered as the author of The Call of the Wild and White Fang, both set in the Klondike Gold Rush, as well as the short stories "To Build a Fire", "An Odyssey of the North", and "Love of Life". He also wrote of the South Pacific in such stories as "The Pearls of Parlay" and "The Heathen", and of the San Francisco Bay area in The Sea Wolf. London was a passionate advocate of unionization, socialism, and the rights of workers and wrote several powerful works dealing with these topics such as his dystopian novel The Iron Heel, his non-fiction exposé The People of the Abyss, and The War of the Classes. On July 12, 1897, London (age 21) and his sister's husband Captain Shepard sailed to join the Klondike Gold Rush. This was the setting for some of his first successful stories. London's time in the Klondike, however, was detrimental to his health. Like so many other men who were malnourished in the goldfields, London developed scurvy. His gums became swollen, leading to the loss of his four front teeth. A constant gnawing pain affected his hip and leg muscles, and his face was stricken with marks that always reminded him of the struggles he faced in the Klondike. Father William Judge, "The Saint of Dawson," had a facility in Dawson that provided shelter, food and any available medicine to London and others. His struggles there inspired London's short story, "To Build a Fire" (1902, revised in 1908), which many critics assess as his best. His landlords in Dawson were mining engineers Marshall Latham Bond and Louis Whitford Bond, educated at Yale and Stanford. The brothers' father, Judge Hiram Bond, was a wealthy mining investor. The Bonds, especially Hiram, were active Republicans. Marshall Bond's diary mentions friendly sparring with London on political issues as a camp pastime. London left Oakland with a social conscience and socialist leanings; he returned to become an activist for socialism. He concluded that his only hope of escaping the work "trap" was to get an education and "sell his brains". He saw his writing as a business, his ticket out of poverty, and, he hoped, a means of beating the wealthy at their own game. On returning to California in 1898, London began working deliberately to get published, a struggle described in his novel, Martin Eden (serialized in 1908, published in 1909). His first published story since high school was "To the Man On Trail", which has frequently been collected in anthologies. When The Overland Monthly offered him only five dollars for it—and was slow paying—London came close to abandoning his writing career. In his words, "literally and literarily I was saved" when The Black Cat accepted his story "A Thousand Deaths", and paid him $40—the "first money I ever received for a story." London began his writing career just as new printing technologies enabled lower-cost production of magazines. This resulted in a boom in popular magazines aimed at a wide public and a strong market for short fiction. In 1900, he made $2,500 in writing, about $71,000 in today's currency. Among the works he sold to magazines was a short story known as either "Diable" (1902) or "Bâtard" (1904), in two editions of the same basic story; London received $141.25 for this story on May 27, 1902. In the text, a cruel French Canadian brutalizes his dog, and the dog retaliates and kills the man. London told some of his critics that man's actions are the main cause of the behavior of their animals, and he would show this in another story, The Call of the Wild.

Another common theme with Jack London's stories is the strength of human willpower. London venerated people with strong character, like himself, and had little time for the weak. Not the physically weak or the handicapped, but the lazy who refused to better themselves or toughen themselves. In this short story, Grit Of Women, he calls it a 'streak of fat' that runs through some people and makes them less likely to survive than those with iron wills.

Grit of Women details the kind of hardships that prospectors faced in the Klondike. Everything from savagely cold winters to starvation so intense that people are forced to eat their dogs, their sled harnesses and even their own moccasins. Having survived the Klondike himself, Jack London used this story and many others to applaud the strength of character of those that also braved the frozen wilderness.