Haiku by Richard Wright: An Unknown Treasure of Black Poetry

Haiku: The Last Poems of an American Icon

Their watching faces,
as I walk the autumn road
make me a traveler

In the last eighteen months of his life, spent in self-imposed exile in France, African-American novelist Richard Wright, famous for Native Son and Black Boy, began to write poetry.

In poor health and spirits, he found emotional healing and grounding in the practice of observing the world and writing haiku. First in his beloved country house in Ailly and then in Paris, he wrote more than 4,000 haiku before his death in 1960. Then, in the last months of his life, he selected 817 for publication.

Now, more than fifty years after his death, the haiku he selected have finally been published. The same collection has gone though several variations in subtitle, but its content is the same: Haiku: Other Worlds (the subtitle Wright intended, published in 2011); Haiku: The Last Poetry of Richard Wright (2011), and Haiku: The Last Poems of an American Icon (2012), all by Richard and Julia Wright, his daughter, who provides a moving introduction.

At the end, I list sources for further reading.

As a Boy, Wright Starved amid Plenty in the American South

How and Why Haiku?

Julia Wright says that her father's haiku were "self-developed antidotes to illness," giving him comfort and occupation on days when he was too ill to sit for long at the typewriter. They also, she writes, helped him mourn the deaths of many friends and colleagues, and especially the death of his beloved mother, which all happened in 1958-59.

Julia Wright also describes movingly how the practice of writing haiku reconnected her father to the natural world. She says that decades earlier in his thirties he "had written . . . how much he disliked the countriside because it reminded him of the physical hunger" he had known as a poor African American child in the fertile American South. Writing haiku not only allowed him to find discipline and distraction from "the volcanic experience of mourning" but also helped him accept "the difficult beauty of the earth in which his mother would be laid to rest."

As my friend Sid Kemp notes, just as Wright grew potatoes, corn, and beans in his French garden and brought them to his writer friends in Paris, he gathered observations and wrote haiku, offering them to friends and now to readers world-wide: a gift of generosity and healing, even as he himself was becoming more ill.

Wright did use haiku to cope with his illness and grief, but they were far more than personal therapy: In haiku, he encountered a new art form he was eager to master. In 1959 a young South African friend introduced him to the form and lent him R. H. Blyth's classic four-volume series of translations of Japanese haiku with notes on their poetics and spirit. For Blyth, roughly speaking, the essence of haiku is the close observation of the natural world as a spiritual practice, a Way of dropping any self-conscious sense of "making art," and becoming one with the natural landscape and seasons. For me, many of Wright's best haiku have this quality.

Like the Japanese masters translated by Blyth, Wright can also connect the natural world seamlessly with his own emotional experience:

As my anger ebbs,
The spring stars grow bright again
and the wind returns.

Haiku and Wright's Other Work

Wright's close connection to nature came long before his involvement with haiku, however. Here are vivid descriptions of his childhood from the first chapter of Black Boy:

"There was the faint, cool kiss of sensuality when dew came on to my cheeks and shins as I ran down the wet green garden paths in the early morning. . . . "There were the echoes of nostalgia I heard in the crying strings of wild geese winging south against a bleak, autumn sky . . . . "There was the teasing and impossible desire to imitate the petty pride of sparrows wallowing and flouncing in the red dust of country roads."

Is It a Haiku?

How Good Were Wright's Haiku?

George Swede, who edited Frogpond, the journal of the Haiku Society of America, from 2008 to 2012, had a chance look at Wright's haiku manuscript before the book was published. He writes, "As with the work of Ginsberg and Kerouac," two better-known pioneers of the American haiku, "Wright's best haiku reach a high standard." Here is one of those he most appreciates:

I love this picture . . . the delicate flower on the bull's horn!

Some of Wright's best haiku play in interesting ways with blackness or whiteness, blackness and whiteness, like the one picked out by Swede below, or the one to the left which I made into a haiga.

Dr. Lee Gurga, past president of the Haiku Society of America, wrote an article on Richard Wright's haiku for an on-line journal dedicated to Wright's work. While praising many of his haiku, Gurga pointed out that Wright's preference for "5-7-5 sometimes leads to less immediacy or feels padded with adjectives." One haiku that impressed me deeply is an example of this issue:

Anyone who thinks that haiku are "supposed" to be about flowers and snowflakes will be taught otherwise by this wonderfully bleak image. Still, I think the poem would be even stronger if it were shorter, perhaps something like:

A bloody knife-blade
licked by a cat:
hog-killing time

Gurga writes, "in Wright's strongest haiku, he presents us with vivid literal images. When he trusts to the reader and trusts the haiku to do its work, he is capable of the most delicate effects, as in the startling number 203:"

Did somebody call?
Looking over my shoulder:
Massive spring mountains.

For Gurga, some of Wright's other poems are simply "Western poems written in haiku form," and he shows us that Wright himself would have agreed with him. In earlier drafts of the manuscript, Wright labels different sections with names like "Projection," "Personification," "Pathos," showing that he is experimenting with combining Western poetic techniques and the Japanese structure.

His original subtitle for the collection was "projections in the haku manner," hinting that he saw his work as skirting the borders of haiku. At the time Wright was working on haiku many Western authors were still uncertain whether one could write authentic haiku in English, and both his questions and his experimentation were very natural.

Some of his "personifications" are lovely poems, if not traditional haiku:

I grant to sparrows
The telegraph wires that brought me
Such good tidings!

Gurga writes that "Wright's haiku will always be an important part of the Wright canon. But," he asks, "will they become a part of the canon of American haiku?" Gurga cites two more authorities of the American haiku world, Cor Van den Heuvel, editor of The Haiku Anthology, and William J. Higginson. They both imply that Wright, while a good haiku poet, would have become a great one if had had teaching, companionship, editing help, and most of all, more time.

It is testimony to Richard Wright's brilliance as an author that in less than two years, ill, preoccupied, and essentially alone, he wrote "one to two hundred" haiku that "would have knocked the socks off anyone in our nascent haiku community at that time" (Higginson).

Gurga concludes that Wright will have many readers "because in his haiku he faces directly the very human problems of loneliness and exile, and helps give each of us the hope needed to go on in this world for another day. . . . Because of Wright's simplicity and accessibility . . . he will be the door through which many people will enter American haiku. Haiku has been called 'an open door that looks shut.' I believe Wright will open that door for many people. That Wright clearly understood that it was not the door to our ordinary world is indicated by the title he chose for his collection, This Other World."

While one can write good haiku purely from the imagination, Wright went with Blythe's view of haiku as flowing from what he saw or had seen. As with all good haiku poets, however, Wright's eye was never separate from his mind and heart, nor from his writer's skill.

He invites us into his world, the "Other World" of haiku, parallel to but somehow more sharply focused than our own. It can include the all-to-common tragedy of street prostitution:

In a drizzling rain,
In a flower shop’s doorway,
A girl sells herself.

It can also touch on the comedy of everyday life, as seen in this completely unselfconscious cook who shows us more than we probably wanted to see:

Sometimes Wright is simply overcome with beauty, and finds the words to point it out to us, so we too, aided by our own imaginations, find ourselves overcome as well.

While some of Wright's haiku touch me much more than others, that is true of every haiku poet and journal I have ever read. I like some of his poems so much, I don't much care whether they are "proper" haiku or not. 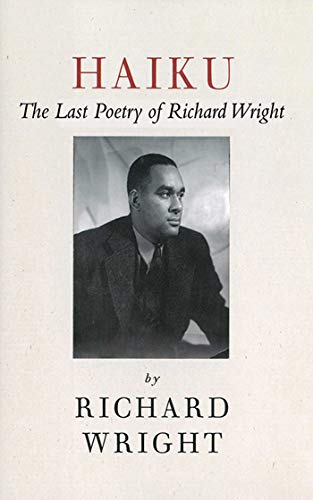 Haiku: The Last Poems of an American Icon

by Richard Wright with an Introduction by Julia Wright.

There is also a Kindle edition.

After reading this, I hope you will want to find out more about Richard Wright's work and haiku in general. Mr. Terebess, a Hungarian haiku fan, has web pages devoted to many individual haiku poets, including Richard Wright. The Wright page has about 125 of his haiku.

The article by Lee Gurga which I cited, "Richard Wright's Place in American Haiku," comes from the Richard Wright Newsletter, volume 8.1, 2000-2001, and can also be found in The Other World of Richard Wright, edited by Jianqing Zheng, and reviewed here by Jim Wilson.