I have always loved fairy tales. When I was a child, I especially loved them when I sat on my father's lap and he read them to me. I was safe and secure no matter how many hobgoblins, witches, ice queens, or mean step-mothers were out there. Sitting in Dad's lap, the warm glow of the lamp lighting the pages and illustrations as I turned the pages, I felt none of these scary characters could every harm me.

I loved fairy tales so much, I even chose to live in the fairy tale kingdom of them all, Germany. There I was able to experience, up close and personal, the greatest fairyland of all. All the castles of my childhood stories and imagination come to life in Germany. The Brothers Grimm for sure.

But, in Scandinavia, Denmark specifically, there was another writer of fairy tales who I loved just as much as the Grimm Brothers. Hans Christian Andersen. His fairy tales have enchanted and entertained me all my life. I have also visited Denmark and in the Copenhagen harbor on the shores of the North Sea, stands the statue of "The Little Mermaid," to commemorate the fairy tale of the same name written by Anderson and in remembrance and honor of Denmark's and Scandinavian's greatest fairy tale writer.

Hans Christian Andersen was a Danish author, fairy tale writer and poet but is best known for his children's stories. Anderson was acclaimed duirng his lifetime for having delighted children world-wide with his fairy tales. His tales have inspired motion pictures, plays, ballets and animated films. I, and many of my generation, grew up hearing and reading his stories and fairy tales. Some of my personal favorites:

Many of these tales are indelibly printed in our brains and we have enjoyed these stories over the years since childhood. Following are a few of my favorites.

This tale by Andersen was written originally as a ballet and published in 1837. This original story is much different than the Disney animated film produced in 1989. This popular fairy tale is about a young mermaid willing to give up her life in the sea and her identity as a mermaid to gain a human soul and the love of a human prince.

The Little Mermaid sees a ship at sea with a handsome prince, and falls in love with him from a distance. Later a great storm hits and the Little Mermaid saves the prince from drowning. She delivers him unconscious to the shore near a temple and waits with him until a young girl from the temple finds him. The prince never sees the Little Mermaid as she quietly slips back into the water.

Andersen wrote this tale in 1845 and it is not at all like the story presented in the film of the same name made in Hollywood in the 1940s. It is the story about a girl forced to dance continually in her red shoes to learn that vanity is a sin.

The main character is Karen, who is very vain and wears beautiful red dancer's shoes. She believes no one can dance better than she does. The shoes eventually take over Karen and she cannot stop dancing, she cannot control them and they are stuck to her feet for eternity.

An angel appears and condemns Karen to dance even after she dies and the tale becomes a warning to vain children everywhere. Karen even goes so far as to have her feet amputated, but the feet still dance in the red shoes.

Karen now wears wooden shoes and walks with crutches made for her and works in a parsonage. Daily, she prays for God's help. Only then, does the angel reappear, Karen's heart becomes so filled with sunshine, peace and joy that it bursts! Her soul flies on sunshine to heaven and the red shoes finally quit dancing.

This is the famous tale of the two weavers who promise an emperor a new suit of clothes that is invisible to those unfit for their positions, stupid or incompetent. When the emperor parades his new 'clothes' before his subjects, they all exclaim how beautiful the new 'clothes' are as no one wants to be found incompetent or unfit for their jobs. It is the innocent truthfullness of a child who cries out, "But he isn't wearing anything at all." Then, the emperor realizes he has been swindled and made fool of by the two weavers who have left with payment of a hefty bag of gold.

This tale is actually based on a story from medieval Spain by Juan Manuel, Prince of Villena (1282 - 1348) that Andersen had read and/or heard by word of mouth. He simply rewrote the tale and modernized it for 1800's Denmark.

Many critics have said that Andersen wrote this tale as his expose of the hypocrisy and snobbery he found when he was finally accepted into The Salon, a group for literary writers in Denmark.

This has also been one of the most favorite of Andersen's tales for children, because it is a tale of the courage of one's convictions and those convictions being expressed by a child, not a hypocritical adult.

This tale of Andersen's has long been one of my favorites. It is the story of a prince who must find a princess to marry but the prince, and his parents, the king and queen, are having difficulty finding a princess that is true and appropriate for the prince.

One stormy evening, a woman, claiming to be a true princess, knocks on the castle doors and requests lodging as her carriage has broken down in the mud on the nearby road. Once she is dried and cleaned up, the prince is taken by her, but his parents warn that this wayward lodger may not be a true princess as she claims to be.

The next morning, the princess appears for breakfast, in pain and with bags and dark circles under her eyes, as she has not been able to sleep properly. The pea has disturbed her sleep and she has not slept a wink all night. To the great relief of the prince, she is a true princess and they are married. This is one Andersen tale that ends happily ever after for the prince and princess.

This tale even entertained us as adults as the smash hit Broadway play, "Once Upon A Mattress," during the 1960s with Carol Burnett playing the lead part of the sleep-deprived princess.

The fairy tales of Hans Christian Andersen have become so popular that they have entered our lexicon as idioms. The phrases 'the ugly ducking' and 'the emperor's new clothes' add a metaphorical meaning when used and come from Andersen's beloved tales. Andersen's fairy tales became so popular and beloved in Denmark, Scandinavia and throughout Europe that he was feted by Danish and European royalty.

I grew up listening and reading the tales of Andersen and they have remained beloved to me all these years. 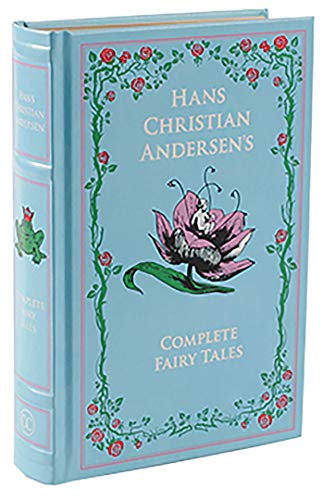