Thelma Raker Coffone is an award-winning writer who enjoys writing on a variety of topics, especially lighthouses.

Series of Books that Follow the Adventures of the Hardy Brothers

The Hardy boys books, created in 1927, is a popular juvenile mystery and adventure book series. It follows the adventures of two teenage brothers, Joe and Frank Hardy, who are amateur detectives living in the fictional town of Bayport, New York. Their father is a famous detective with the New York Police Department and their ambition is to follow in his footsteps.

Mr. Stratemeyer suggested to the publishers the young sleuths be named the Keene boys, the Scott boys or the Bixby boys. For some unknown reason, the publishers decided Joe and Frank should be known as the Hardy boys.

The Mystery of Cabin Island is Volume 8 in the series. The boys and two of their friends are visiting Cabin Island on their Christmas vacation. The story features the usual amount of Hardy Boys adventure with a story line that includes a missing person, a ghost, a vandalized boat, stolen groceries and a search for hidden treasure which turns up in the fireplace of the cabin. This is typical fare for a Hardy Boys mystery and one that would be enjoyed by young or old alike.

What Happened at Midnight

What Happened at Midnight, Volume 10 of the Hardy Boys Mystery Stories, is another example of the boys' escapades. The junior detectives get involved with jewel smugglers, a secret invention, a burglary, and one of the brothers disappearing as the clock strikes midnight. The book's ending includes a thrilling biplane (a sign of the era) chase and a parachute escape. Wow, there is never a dull moment with the Hardy Boys.

In 1959, the series of books were revised to eliminate racial stereotypes. The publishers had been receiving letters as early as 1948 from parents complaining about the problem. The revision process did not work out as planned when all non-white characters were eliminated from the books. By the 1970's, a new set of ghostwriters were on the scene and black characters were once again included in the stories.

Slang was eliminated as well as difficult vocabulary words. To appeal to the younger readers, the focus was placed on non-stop action and the number of chapters were reduced from 25 to 20 to accommodate the readers' shorter attention spans.

The Hardy Boys Mystery Stories were published for almost 80 years. The series included 190 volumes, the first of which was The Tower Treasure.

The characters of Joe and Frank Hardy would continue in Hardy Boys Casefiles, a spin-off series created in the 1980's. It was action-packed with violence and international espionage. Many other spin-offs were written including The Undercover Brothers which featured Joe and Frank as members of American Teens Against Crime, a fictional top secret government agency. 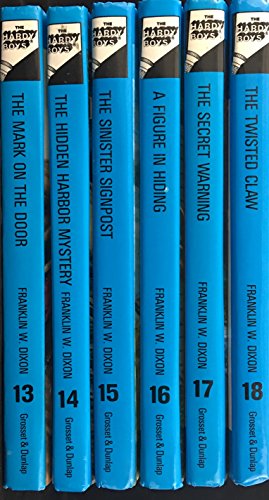 The Books Continue to Be Best Sellers

Even with all of the changes over the years and the variety of ghostwriters, the characters have remained popular and not just with the juvenile book market. The books have been translated into more than 25 languages and sell more than a million copies a year.

The Hardy Boys books have become a popular item with collectors. Many people see It as a challenge to collect all volumes of the series and many fathers pass on the books they collected as a youngster to their children. They make an excellent gift choice for juvenile readers, boys and girls alike.

Critics have offered many explanations for the popularity of the books but I like to believe that it all boils down to one thing....the triumph of good over evil!

Leaving in young hearts the

Did you read the Hardy Boys books as a child?