Hemingway's A Farewell to Arms: An Analysis in Film and Literature

A man can be destroyed but not defeated. I feel the same at some point but later I realize I cant be defeated and here I am

Ernest Hemingway is one of the most famous American novelists and short -story writers. He won Noble Prize for Literature in 1954. I really love his writings and it is hard to tell which work of his is the best. Even his short stories are very famous. In a single page he conveys a lot. His short story Cat in the Rain is my favourite. He also awarded Pulitzer Prize for his novel The Old Man and the Sea in 1953. He is also very famous for his Ice-berg theory. He has also given the concept of Lost Generation.

Hope !You will enjoy his one of the most famous novel A Farewell to Arms.

A Farewell to Arms: A Compare and Contrast between Literature and Film

Any work of art is primarily a reproduction of a sensate experience through impressions made upon the observation of the artist. A novel and the film made on it are, however identical in theme and also aim, but the two are not necessarily the same in their artistic presentation. Hemingway's A Farewell to Arms is both a literary novel and a film, but the artistic excellence attained by each are certainly of a different meaning and magnitude.

Literature, particularly, fiction writing, feeds upon the individual impressions of an object, theme, happening, or situations the author observes and, at times, undergoes. It is very often the detail of the impression he has had undergone, and thereafter reproduced in an honest and contemplative description. The work of a novelist is to convey the chain of happenings in the form of a statement he personally feels, and ascribes it a viewpoint which is individual but has a tendency of growing universally. Hemingway, in presenting The Farewell to Military Arms evinces his individualistic his individualistic approach to the idea of both arms and love, establishing the fact that he writes for the sake of writing, presenting a personal viewpoint or to say, an experience and not an ambition of becoming popular. The book as a piece of literary art reflects Hemingway’s “desire to reshape the broken image, the battered world and the blighted values of life”, presenting his hatred for war as the theme of the novel. Since the writer has to depend upon the images as a weapon of exhibiting the sensibility behind an episode. Hemingway has succeeded in highlighting the sinews of war and the slow and dumb working of love. It is also there that the imagery used by him exhibits the gauge of his impressions of war as well as love. The book comes as a statement, a photograph of the impulsive but thematically very strong entities of both war and love. The ideal of a romantic “relationship which has started off with sexual frivolity” between Frederick Henry and Catherine has perfectly been matured into a classical sense of togetherness. The value and the art are retained in their perfect sense of meaning, and also description therein of the impulsive conflicts of war and love.

Whereas the film A Farewell to Arms is a reproduction of the novel, A Farewell to Arms a lot of distortion has been made in both its value and meaning. It is true that a novel tends to abide by, yet explore the possibilities of the psychological law and also that the film tends to abide by, yet explore the possibilities of physical law, the film on the book has diverted the whole effect to a different end. The meaning of Henry and Catherine in the field of war is by virtue of their official deployments, where the aesthetic of beauty and duty together converge for the sake of the aesthetic of love. The ethics of the glorification of love through sexual infatuations takes place on an implicit, a natural way, such that the sense of togetherness seems to have been bestowed upon them, and not acquired through any of the physical bindings. The film has truly been a successful effort because it makes the theme more clear through visual effects. Naturally, the spectator feels comfort in witnessing the sensibility and the related happenings with his own eye. The film has of course been advantageous in making the whole story an episode under the visual scrutiny of the spectator. But the movie as a reproduction of a book is limited in communicating the idea as well as the emotion embodied by the author. It is not only twice, but thrice removed from reality in the author’s point of view of feeling and thinking. The movie is the imitation of the author’s imitation of an episode in war and love. The heroine in the book is sincere, given to duty, idealistic and slow-going and very hard to be initiated into sexual relationship. Henry is likewise a passionate hero in warfare, ambitious to fight great wars, and has courage to grow like a Shavian, professional soldier, without ever submitting his romantic glamour to any creature of beauty on earth. But the simple-hearted Henry, a perfect soldier, given to his sense of duty and valor, is seen naturally falling down like Catherine. The film on the same issue fails and seems to have aimed at a different purpose.

The novel is all about:

The coward dies a thousand deaths, the brave but one'.... (The man who first said that) was probably a coward.... He knew a great deal about cowards but nothing about the brave. The brave dies perhaps two thousand deaths if he's intelligent. He simply doesn't mention them.

Enjoy the Movie "A Farewell to Arms"

Read the book if watching movie is not your cup of tea. I am sure that you will certainly enjoy the book. 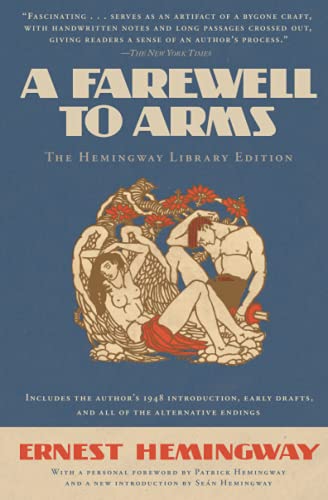 A Farewell to Arms: The Hemingway Library Edition
Buy Now