Henrik Ibsen's A Doll's House and the Rise of Feminism

Ibsen's A Doll's House is an important play that looks at social constructs and the assumption of roles within a society and a marriage.

There are many important moments in the play that mirror many women's own self awareness of their individual worth and value as people---above and beyond the role of wife and mother.

Nora is one woman in that fight for change and acceptance. It takes the rejection of the confines of her own "doll's house," set up by the males in her life---her father and her husband---for her to break free of her self-miniaturization and step out the door to the world of reality.

Nora's need for independence and autonomy trumped her belief in her role as a wife and a mother. But this does not mean that Nora lacked maternal instincts or feelings for her children. She realizes that she must save herself in order to save them.

By stepping out the door and into the world, she is stepping into the 20th Century, a time of change and growth for many women around the world.

Nora is a spacey, flitty housewife who holds a deep secret. When her husband,
Torvald, was sick she borrowed money from a loan shark, Krogstad, in order to take her husband away from the cold Nordic winter and to warmer climates so he could heal.

Since women were not allowed to make banking or business transactions, she faked the signature of her father (who had just recently died) to get the money. She is trying to pay him back undercover using the allowance that Torvald gives her. She worries about what will happen if her dirty deed is found out.

Krogstad works for Torvald at the bank but he is let go of the position and Torvald hires Nora's new-to-town friend Mrs. Linde to fill the position. She is a widow with no money and no prospects so under the circumstances it is considered okay for her to work.

Nora Was Living In Her Own Dollhouse 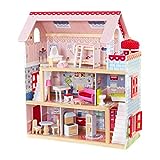 Krogstad does not want to lose his job so he starts blackmailing Nora, saying that he will expose her fraud (which he has figured out) if she doesn't convince Torvald to keep his position.

On the night of a party everything comes out when Krogstad leaves a note to Torvald. Torvald confronts Nora and his anger is shocking to her. She thought that he would defend her but instead he blames her and tells her how stupid she is to ruin his reputation.

It takes this moment for Nora to realize how intolerable her situation and marriage really is. She decides to leave Torvald and tells him this. Krogstad, sends another note saying he has had a change of heart (due to falling in love with Mrs. Linde--they are old lovers) but it is too late for Nora. She has seen Torvald's true colors and she walks out leaving him and her children behind.

Jane Fonda as Nora in A Doll's House: Final Scene

Nora As A Complicated Character

As an audience, we go from believing that Nora is a spacey, silly woman to realizing that she has depth and intelligence that she subverts in order to play her role, the doll wife and doll mother who flits around and takes care of her dollhouse.

Nora is also working against the confines of societal restrictions and rules which dictate that her husband's and children's needs should always be put first and that her own wants and needs are secondary.

Nora realizes near the end that she has always been controlled by the men in her life---first her father and then her husband and that she has never been appreciated for herself.

Listen To or Read "A Doll's House" for Free

When the play came out, audiences of the late 1800's were shocked by it. The fact that Ibsen had portrayed a strong female character who was awakening to her own inner person would have been shocking enough. Couple that with the fact that she walks out on both her husband and her children and the play was elevated to scandalous.

The ending was so controversial that some playhouses were even changing the ending to have Nora end up staying. When Ibsen found out about this, he decided to write an alternate ending. In the alternate ending Nora is about to leave when Torvald reminds her of her duty to the children. She hesitates then decides to stay in order to take care of them---the way a good Victorian woman should. (http://ibsen.nb.no/id/11111794.0)

What About Dr. Rank

Dr. Rank is a friend of both Nora and Torvald's and he has an obvious fascination with Nora. Nora seems to trust him more than she does the others and he is less dismissive of her than the other men in the play.

Dr. Rank is dying of Syphillis which was contracted in utero from his father. His dying and confession to Nora seem to help, if anything, spur her on to face the illegal loan issue and then Torvald's reaction to everything. His dying makes her realize that she has not been treated very fairly by men for most of her life.

Ibsen's play can be classified in the category of Realism. A Doll's House was one of the earlier plays that attempted to portray real life and real life issues on the stage.

The setting was real, it dealt with the real issues of a married couple, the issues women were facing as they came into the twentieth century, into the age of communication and education. They were beginning to realize their own autonomy and their own self worth and Nora was an early voice in that fight that eventually led to a cascade of women's rights.

After you've read the play (available in the public domain), take the quiz to review your knowledge about the facts and events and characters.