In medieval literature, especially the genre known as courtly romance, lofty Love plays a distinct role, one that is different from more ordinary conceptions of love or affection. True Love, often spelled with a capital "L," is an elite state reserved for only the most deserving nobles.

Most relationships and marriages within medieval literature will not attain this type of Love, and this "special" form of love can even occur among people who are pledged or even married to other people!

The "capital 'L' love" is seen in texts featuring the most famous of history's lovers, Tristan and Isolde, Troilus and Chresside, and perhaps most famous of all, Lancelot and Guinevere. Yet one of the most surprising aspects of this form of love to our 21st century conceptions is that it develops not from prolonged contact or intimacy, but immediately, from the first look, also referred to as "the gaze."

While this "love at first sight" idea may seem like little more than a romantic flight of fancy, it actually seems less frivolous or superficial when you consider the medieval mindset more closely.

In medieval times, marriage was usually a political or economic contract across all social classes. Love matches were infrequent, and "dating" as we know it almost unheard of. Intense love between two people was looked at as a divine gift, or fate. This gift had very little to do with the people involved, they were simply destined to love one another without any choice in the matter.

In this line of thinking marital infidelity could be forgiven if it was in the service of real Love, because the lover's didn't have any choice in the matter. Similarly, all that was needed to bring the fated lovers together was simply their eyes to rest on one another. Once "the look" took place, divine providence took over, and the lovers would be "smited with love's arrow" or some other similarly descriptive phrase.

Because only the greatest knights are so affected by the gaze, this form of Love speaks to certain measure of worth. Only the most lofty of love’s, only the greatest pairings of men and women will fall into Love’s spell to such a degree. It was considered a mark of honor during the middle ages for a well-bred courtier to lose his senses at the sight of a pretty lady.

In medieval romances such as Marie de France's Lais, Wolfram von Eschenbach's Parzival, and Chretien de Troyes Lancelot of the Cart, “the gaze” serves as the vehicle through which Love is able to overwhelm the knights. Once the knight has looks at his lady love, he becomes almost incapacitated with feeling for her, but this intense sensation of love only seems to arise after he has set eyes on her.

Yet even beyond simply falling in love at first sight, looking at a beloved in these medieval texts acts as a sort of spell or enchantment, putting the "looker" into Love's spell. Chretien's Lancelot has a great example of this type of all-powerful love gazing. In a pivotal scene, Lancelot sees Guinevere again after a long separation.

Writes Chretien: Lancelot “gazed attentively and with pleasure at her. When he could no longer see her, he wanted to throw himself from the window and shatter his body on the ground below." Luckily Gawain saves Lancelot from this fate by physically dragging him away from the window, and breaking the sort of rapture that has captivated Lancelot.

Rather than the more stereotypical idea of looking on one’s beloved as a positive expression of hope and courage, in this case the gaze is taken a step further. Here, to gaze upon one’s love actually causes a state of madness. It implies more than just emotion, or devotedness, but instead almost seems to be the work of magic, some kind of spell that cannot easily be broken. Gawain does not simply call or yell at Lancelot to break the reverie, but literally has to drag him away, not an easy task considering Lancelot is King Arthur's number one knight! 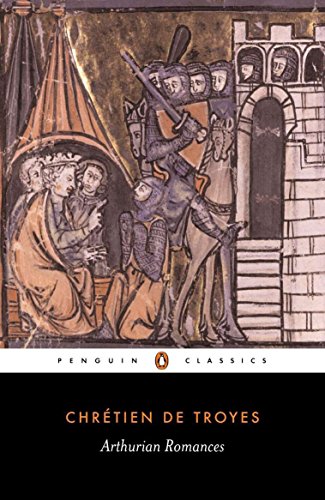 In this scene, reason is completely absent. Lancelot is so enraptured with looking on the queen that her absence from his frame of view makes him want to throw away his life. This is quite a powerful declaration. It would be more understandable for Lancelot to want to hurl himself from the window if he thought she was dead, or gone forever. Yet this is not the case. It seems that he has essentially lost his mind by losing sight of her.

Rather than a mere articulation on love, Lancelot's lack of reason speaks to the power of the gaze, or rather, the effect that a beautiful woman, who is also the heart’s desire, has on a knight. If a knight is meant to value such attributes as strength of will and character, of eschewing foolish action and deeds, its interesting that such things are so easily tossed aside in the face of love. Indeed, one might even argue that the only time that a knight is allowed to stop “acting knightly” is when he is in the power of the gaze. It functions as a kind of built-in escape clause to the everything that is expected of a knight. In this way, they are let off the hook for acting foolishly, blinded by love (or lust). If they are under the spell of the gaze, then any foolish actions not really their fault, and they are no less a “real knights” because of them.