Always he sought to free human consciousness from conditioning so that the world could be free of its current state of violence and division.

J Krishnamurti had a major impact on the world, traveling the globe to teach on the topics of human consciousness and conditioning, fear, division (within and between people), war and poverty. For more than 60 years he endeavored to "set man absolutely and unconditionally free".

During this time he met with people from all walks of life: Boxers, celebrities, workers, public officials and spiritual leaders and scientists. Always he sought to free human consciousness from conditioning so that the world could be free of its current state of violence and division.

Here I would like to give a relatively concise biography about Krishnamurti, so you understand his background, and a list of books by Krishnamurti which I consider of particular value.

Krishnamurti was born in India to a Brahmin family, in 1895. His mother died when he was a young child, leaving him and his siblings to be raised by their father. His father was a government worker, so the family was surviving very well for a time.

His father became very interested in the teachings of the Theosophical Society, a religious organization devoted to finding the truth in all religions. They followed the model that there are many paths to truth, which Krishnamurti completely rejected eventually; but we will get to that later.

So, during this time that Krishnamurti was under the care of the Theosophists (including famed activist and Theosophical leader Annie Besant), he was educated by private tutors, groomed and taught manners, was surrounded by British aristocracy and high society and put through a rigorous spiritual training. However, by the time he was getting well into his 20s, some time in the 1920s, many years after Leadbeater originally found him in 1909, Krishnamurti began to have strong misgivings and doubts about the Theosophist way and their regimented way of "grooming" him and their adulation for him as the World Teacher. In addition, he was going through a spiritual transformation which has been described as The Process, in which his already high level of sensitivity was further heightened and he would be overwhelmed and bed-ridden, speaking and moving as if actively doing something in his sleep.

Eventually, Krishnamurti broke off from his imposed title of Messiah and ended the branch of the Theosophical Society that was in charge of promoting him as a World Teacher. In doing so, he rejected this notion of a path or paths to enlightenment or truth, correctly stating that these paths just further divide people and obscure truth. Truth is right there in front of you, no need to take any path to it. He also rejected all organizations and religions, with their impositions of doctrines and fantasy and creation of division and conflict. Krishnamurti maintained that "truth is a pathless land" and that he did not want followers.

That was back in 1929. He spent the rest of his life, up until his death in 1986 at the age of 90, teaching people about the human mind, our conditioning, freedom from this conditioning and the possibility of a world free of division and violence.

Star in the East: Krishnamurti--the invention of a Messiah
A relatively unbiased examination of Krishnamurti's life, following the story from his early childhood before the Theosophists took him in, to his discovery by Leadbeater and on to his life of teaching across the globe.
Buy Now

The following are books that I consider very valuable works of Krishnamurti, for various reasons which I explain. I have them in the order that I think they should be read. Some of them are works that were put together while he was living, others are compilations published after his death. It is important to note that Krishnamurti's books are really transcriptions of his talks and dialogues he held around the world. Reading them is akin to actually listening to a talk. These books are very straight-forward yet profound.

This book is very interesting, it is a compilation of talks Krishnamurti gave at various Universities. It will give the reader a good look into Krishnamurti's uncompromising approach. He doesn't give the listener an escape from himself. He prompts the inquiry of why we want to escape at all.

He has us face our violence and division and delusions, without escaping through further fabrications of thought. To me, this book is a great introduction to Krishnamurti, it gives you precisely what Krishnamurti was doing with his global teachings. 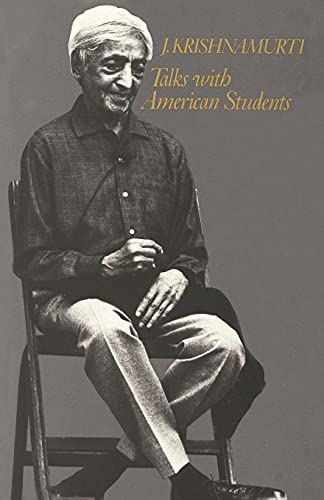 Freedom From the Known

This one gets to the heart of the matter. Krishnamurti exposes the fact that our conditioning is our security and we cling to what we know rather than risk the uncertainty of a free and unconditioned life. We hang on to our identifications, ideologies and illusions, made up of the past and projected into the future, because it is known and therefore gives us a sense of security. However, he also explores whether, in fact, this "known" and our clinging to it is giving us security or is the cause of all of our violence and confusion.

Freedom From the Known
Buy Now

The First and Last Freedom

This book explores this main fact that Krishnamurti was always trying to get across: There is no method, no doctrine or ideology, to follow to see the truth. Our direct perception, not blocked by ideology and identities, is our way to truth; and it is not a way at all, because then the truth is right in front of us.

This is probably best conveyed by the words of Krishnamurti himself: "The first step is the last step... each time." To see clearly, we must have freedom; we cannot be bound by ideas, identificatons or experience and image. This is the first and last freedom: total negation of thought. 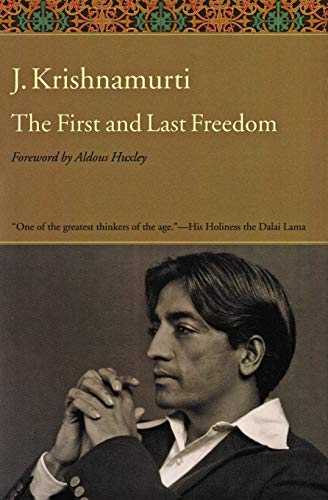 The Awakening of Intelligence

A good part of this book is devoted to dialogues Krishnamurti had with various people that wanted to talk with him; including, musicians, a Swami and his good friend David Bohm, the physicist. This book is a good exposition of the quickness of Krishnamurti's mind and how he addressed the pretense of the "gurus" and their followers. The book also contains a great discussion between Krishnamurti and the physicist David Bohm. Krishnamurti and Bohm met in the 1960s and had many great dialogues that had incredible depth and meaning.

This book is thick, but well-worth reading and actually very compelling and captivating. Like all of Krishnamurti's books, if you read this and give what you're reading good attention, it will, indeed, awaken intelligence. This awakening of intelligence occurs when we've dissolved all illusion. 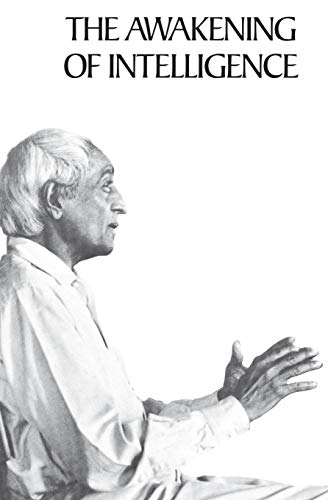 The Awakening of Intelligence
Buy Now

The Ending of Time

The Ending of Time is a series of dialogues between J Krishnamurti and David Bohm. It is interesting to read discussions between two great minds that explore humanity's issues with great depth and completion.

Krishnmurti and Bohm explore what happened to humanity, how we took a wrong turn down a road of confusion, division and violence and greed and acquisitiveness. They discuss how the mind seeks security through psychological accumulation, through identifications, ideology and time-based thinking; this psychological accumulation and time-based thinking are illusory struggles for survival, psychologically, which match and are confused with our efforts for physical survival; we have turned our need for physical security and accumulation into a false need for psychological security and accumulation. And it has led to chaos and brutality. The two men inquire into whether we must still live these lives of struggle, control, regimentation and illusion or if another way is possible.

This is an incredible book and definitely worth reading for anyone wanting to understand the state of human consciousness and how it affects society and the entire planet.

The Ending of Time: Where Philosophy and Physics Meet
Buy Now

The Future is Now

In this book we read Krishnamurit's final talks, the talks he gave before he passed away in 1986. The talks are very enigmatic and reveal that Krishnamurti knew that his life-long journey to teach people around the world would soon come to an end. Even more than usual, his down-to-Earth lucidity comes through in these talks, expressing and exploring a deeply and truly religious meaning to life in terms so direct and touching it inspires understanding of the true meaning of his teachings. One gets the feeling that much of Krishnamurti's later work was a call to action; calling on us to change our thinking actually, so that we can break from this path of violence and division and illusion that we've been on for thousands of years, and create a whole new existence free of all that destructiveness.

The Future Is Now: Last Talks in India
Buy Now

While reading Krishnamurti's work, you may find yourself realizing that what he points out as wrong in the world are things you yourself have been troubled by but have not been able to quite put your finger on before. The divisions, the fantasizing, the struggle and conformity; Krishnamurti very articulately and precisely describes these disorders of the established social order and very accurately told the world that we are held in prison by this brutal and insane society.

While reading Krishnamurti's books you are also liable to have some very profound insights that continue to open the door to more and more depth of understanding.

For more reading on Human Consciousness and Society