James Travis Reeves also known as Gentleman Jim was an American country and pop music singer and songwriter popular in the 1950s and 1960s. He was the biggest male star to emerge from the Nashville sound. His songs were big hits in the country and pop charts, until he died at the age of 40 in a private plane crash in 1964. He was also a member of the Country Music and Texas Country Music halls of fame.

Jim Reeves was born in Galloway, Texas on the 20th of August 1923 and his father Tom Reeves died when he was just 10 months old. His mother Mary Adams Reeves was left with 9 children, all of whom she had to raise on the family farm. Jim was five when he was delighted when his brother brought home a gramophone and Jimmie Rodgers record, the ‘Blue Yodel No.5’. He was very impressed by his works. Jim's passions were for country music and baseball. At the age of nine, Jim was so desperate for a guitar that he traded stolen pears for an old guitar that he saw in his neighbor’s yard while other sources quote him as saying that he traded an old glove for his guitar. He was a wonderful music entertainer at school, and the kids that rode with him in the school bus enjoyed his guitar music in the bus at times when he brought the guitar to school for special programs. Since then he was practising and improving his talent as a singer. After a few years when he was well confident that he could do his best, he appeared on a radio show in Shreveport, Louisiana.

Jim was a good baseball player and had a wonderful athletic career at Carthage High School and and his skills won him an athletic scholarship into the University of Texas, where he enrolled to learn speech and drama. He also started to play semi professional leagues, till he signed up for the St Louis Cardinals farm team in 1944. He then continued to play baseball for the St. Louis Cardinals farm team for almost three years as a right handed pitcher, after which he retired due to an injury in his leg with the sciatic nerve.

Jim's fine speaking voice helped him secure a job as a DJ for KGRI at Henderson, where he sang live between songs. He also started singing in the Henderson area. Though he signed for a couple of Texas based labels, he failed to become popular. His first recordings were made in Houston in 1949, on the Macy label. In the late 1940 to early 1950s, he started making Mullican style recordings. His musical break came when singer Sleepy LaBeef was late for a performance, and Reeves was asked to fill in, but other sources, including Reeves himself name Hank Williams as the absentee. His first contract was signed in 1951 wit Abbott Records. In 1953 he joined the Louisiana Hayride which was the turning point in his life towards success.

Jim Reeves received gold discs for 'Mexican Joe' and 'Bimbo'. He started becoming very popular as far as Norway and South Africa. In 1955, Reeves was signed into a 10-year contract by Stephen Sholes, who produced some of Reeves' first recordings at RCA. Jim’s singing style was loud for his first few recordings. But later he started to soften his volume, using a lower pitch and singing with lips very close to the microphone. RCA was not happy about this initially up until 1957. Jim then had to take the help of his producer Chet Atkins, to use this style. "Four Walls" took top position on the country charts, and also went to number eleven on the popular charts. It became an enormous US success in 1957. In 1957 Jim had the rare opportunity of doing a European tour which was a request by the US army to meet the demand for country music across Europe. Though it was not so successful as expected, he felt happy to see that his name had become a household word in America when he came back. In 1963 Jim went to South Africa to star in his one and only film Kimberly Jim.

Reeves' songs were remarkable for their simple elegance along with his rich light baritone voice. The songs Adios Amigo, Welcome To My World, and Am I Losing You were on top charts, and his Christmas songs have been all time favorites which include Silver Bells, Blue Christmas and An Old Christmas Card. Jim Reeves was at the height of his career when his private plane crashed outside of Nashville on July 31, 1964. Jim was returning back to Nashville from Arkansas after negotiating for a property deal. Pilot Jim Reeves and his pianist and manager, Dean Manuel, died when their single engine plane encountered a violent thunderstorm while crossing remote hills and as a result of that Reeves suffered spatial disorientation. It was later found that he was flying the plane upside down and assumed he was increasing altitude to clear the storm when around 5:00 pm when it was approaching to land the plane faded from radar screens and radio contact was lost. The wreckage was found 2 days later, where they found the plane's engine and nose buried from the impact. 12 planes and two helicopters along with another 400 people, including fellow country singers, were involved in the search.

Jim's memorial services were held in Nashville and was buried in a specially landscaped area three miles east of Carthage on U.S. 79. Thousands turned out to pay their last respects at his funeral on August 4. The memorial statue is 12 feet tall. It depicts Jim standing with a guitar, and that statue has an amazing sculpture.  It is also one of the most popular tourist attraction in the county.Though Jim Reeves had died, his sales increased following his death.

Reeves was elected posthumously to the Country Music Hall of Fame in 1967. there is an inscription on a bronze plaque, that reads

"The velvet style of Gentleman Jim Reeves was an international influence. His rich voice brought millions of new fans to country music from every corner of the world. Although the crash of his private airplane in 1964 took his life-posterity will keep his name alive-because they will remember him as one of country music's most important performers."

In 1998, he was inducted into the Texas Country Music Hall of Fame in Carthage, Texas, where the Jim Reeves Memorial is located. The inscription on the memorial reads,

"If I, a lowly singer, dry one tear, or soothe one humble human heart in pain, then my homely verse to God is dear, and not one stanza has been sung in vain."

After his death, his widow, Mary, started to promote his albums. She combined his previous releases with unreleased tracks and produced new albums. From the year 1970 till 1984, there was at least on Jim Reeves single, that hit the charts. She also opened and run a museum in Nashville, which she run from early 1980s till 1996. Jim's record, 'Distant Drums' became the number one on the British singles chart in 1996, which was then named song of the year in UK. Also a CD compilation which has a collection of his best songs, reached its peak of number 7 in the UK album chart in late June 2009.

Listed below is a few collection of his memories, which includes his favourite poem, Jim's favourite joke as said by Leo Jackson and a letter written to his nephew John Rex Reeves.

This poem was Jim's favorite, which he always hung on the wall in his office. This poem can also be seen in many of Jim Reeves' books.

Leo Jackson who was the one and only lead guitarist  of Jim Reeves' Blue Boys band. Once during his chat with Jim's nephew, he told him that Jim was always interested in telling jokes on his shows. This particular joke was his favourite, which he kept repeating often in many shows

Jim Reeves was loved by his fans throughout the world. Besides this he was also very much loved by his family. John Rex, his nephew was very close to Jim. John grew up from his childhood hunting, fishing and playing baseball and golf together with Jim. John Rex still remembers playing golf with Jim just two weeks before he died. 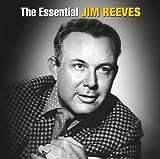