About the Author - Jinx Schwartz

Jinx Schwartz divides her time between spending summers in Arizona and winters in Mexico. She actually does have a live aboard yacht (shown in a photo below).

Jinx created the character of Hetta Coffey, and I suspect Hetta is the author's alter ego! They both have red hair, they both have a yacht, they both are from Texas, and both of them are super smart. They also have a really mad hatter sense of humor!

Just Add Water won the Eppie award for Best Mystery, and Just Add Trouble was a finalist for the same award.

Ms. Schwartz has done time in many countries around the world. This has resulted in a fair and balanced view of ingenious experiences that are capable of amusing people who do most of their travelling through well written novels!

The first of the Hetta Coffey adventures starts with Hetta finding and falling for a yacht that she can call her very own. She wants to enjoy life to its fullest while living full time on the sea.

After a disastrous affair in Japan, Hetta moves back to her fixer-upper home in San Francisco. She was jilted at the proverbial alter the day before her wedding. The jerk even steals her credit card and empties her bank account!

After commiserating with her best friend in the whole world, and also with her old dog Raymond Johnson, Hetta begins hanging out at the yacht club. She decides to buy a yacht, and get a real man on the hook.

Meanwhile, Hetta has several mysterious events that happen at her regular home. And after the dead man turns up in her hot tub, the game is afoot!

Hetta is an engaging happy go lucky red head with a bit of a temper. Her life is anything but stable, but she goes full steam ahead and meets life with the gusto that native-born Texans all seem to have along with their home-style way of talking.

The Hetta Coffey series is funny, hysterical at times, and always engaging. It feels as if you are in a chair right next to Hetta and Jan, drinking fun mixtures of alcoholic beverages and discussing the latest man conquest.

Living on a Yacht

Dead bodies keep turning up around Hetta as she settles in to being a yacht owner. There is so much to learn about living aboard a moving home. There are new nautical terms to learn, whales to watch, and shopping to be done.

There is a Mexican/Japanes plot afoot that involves desalinization plants, too much fresh water emptying into the sea, and handsome men with questionable backgrounds. One of the men is Hetta's captain!

It's hurricane season, and only naïve people sail these Mexican waters during this time! Hetta may be a bit naïve, but she learns really fast!

Jenks Jenkins and Hetta Coffey decide to spend a little time together in the lovely port city of Guaymas, Sonora, Mexico. Jenks is Hetta's on again, off again love of her life. Hetta contrives to spend some romantic time aboard her yacht.

But, it's quickly resulting in chaos, of course. Jenks has to head off to Kuwait, and Hetta must do what Hetta does best, which is to get into a world of mystery, friends, drunken aunts, parrots, and a shadowy Federale. The Federale is kind of handsome though.

Hetta is stubborn and mischievous. Her best friend, Jan is only slightly more level-headed. Between the two of them, comedic adventures ensue.

Hetta's yacht needs repairs. Hetta needs money to pay for those repairs. She accepts a shady job at a Mexican copper mine. The job is in northern Mexico near the border. What could go wrong?

In Hetta's words, "And, presto change, I was off on another adventure, and this time with a regular old, probably boring job where I couldn't get into any trouble. I heard wings flapping and a pig flew by."

Hetta rents a home on the Arizona side of the border and this is a good idea because Mexican jails just aren't fit to live in if she gets caught doing something shifty. These shifty issues include, but are not limited to: smuggling people, drugs, dirty bombs and terrorists. Yikes!

Probably the best part of any Hetta Coffey book is the characters. Schwartz creates amazingly lifelike people and animals. Yes, even the animals are integral pieces of these novels.

In Just the Pits, we get to know more and more about Jan, Hetta's best friend. We learn about "Trob", the genius that is Hetta's boss. Craigasaurus, Hetta's gay veterinarian who loses weight and meets a special cowboy. And not least is Po' Thang, a dog with a plan.

Along with Jenks Jenkins and a slew of shady criminal types, Hetta is always on some crazy, mixed up adventure that will keep the reader laughing all the way to the end. And you will want more!

Jan and Hetta end up in Puerto Escondido at a party hosted by a rich Japanese businessmen. Why turn down an evening of free food and booze? I think you know what happens next...

Jan and her boyfriend, Brigido Comacho Yee (Chino), are up to their neck in Hetta's latest project. Hetta has a lead on a lost Spanish treasure galleon! The galleon just happened to be the one that Chino's ancestors come over on from the Philippines. Chino specializes in whales, but he won't turn down a government expedition to find the lost galleon!

Some of the places Jinx has traveled as an author. 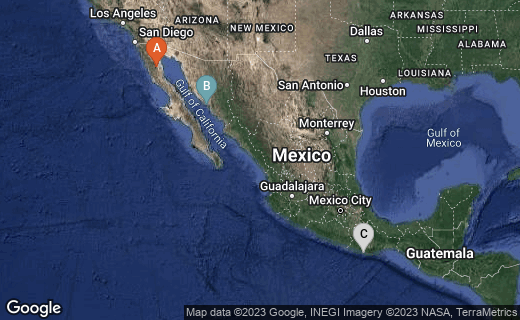 Hetta and her yacht sail around, about, in, and away from the amazingly beautiful Sea of Cortez.

Other Books by Jinx Schwartz

Jinx has written three other award-winning books. One about her native home of Texas, and the other about the island of Haiti. Another book, Troubled Sea, is a novel about living on a yacht in the Sea of Cortez and having to deal with the drug trade.

Land of Mountains is about 10 year old Jinx being uprooted from her home in Texas and moved to the strange island of Haiti. Her whole family accompanies her engineer father as he builds a damn for the country. The young girl quickly assimilates life in a country of political unrest, voodoo, and a pet zombie of her very own.

The Texicans explores the author's own roots in the big state of Texas. The tale begins in 1806 and covers the war between the Spaniards, Mexicans, and Texicans. This book should probably be required reading for anyone that wants to learn about the history of America's second largest state.

Would you give up a permanent residence to go on the adventure of a lifetime by buying a yacht?