John Steinbeck is easily one of the greatest writers from these not so United States of America that ever lived. His work captures absolutely timeless characters in the depravity of a world driven by human greed and the wealthy classes incapability to be charitable, and he did so like none other before him within the medium of the English language. He was a contemporary of Ernest Hemingway, and had certainly experienced the Great Depression, an economic nightmare triggered entirely at the behest of international bankers for their own evil ends - and from that experience, he'd relate it to millions with unforgettable novels concerning man's inhumanity towards his fellows, and the human psyche's over infatuation with fiat currency.

My own first personal recollection of reading the work of John Steinbeck was probably sometime early on in High School, and we'd been assigned the classic tale of tragedy - the short novel The Pearl, a sad tale about the poor, sudden wealth, and the illusion that happiness would be found within it.

For his passion concerning the plight of the destitute, John Steinbeck would win many a Literary honour, and he'd be hounded and harassed by J.Edgar Hoover's FBI most of his adult life.

Young John Steinbeck holding onto a pony in his hometown of Salinas, California, in 1907

John Ernst Steinbeck, Jr. was born on February 27, 1902, Salinas, California - just a few miles away from Monterrey Bay, and some of the most beautiful terrain in all of the world. Salinas was basically a frontier town then, and as the region contained some of the most fertile soil on the entire planet Earth, there were forever migrant workers there to harvest the fruits of a wealthy landowner's land, and there still are today.

John Ernst Steinbeck, the father of our giant of American literature, was the Monterrey County treasurer, and his mother, Olive Hamilton - a school teacher. Mother and son shared a passion for both reading and writing, and would their entire lives. The family attended a local Episcopal church, and during the Summers John would work side by side with migrant labourers in the fields picking fruits and vegetables. From those fertile fields John would learn some things about the harsher side of life, and the desperation of persons driven to migrant labour; and as I've seen those fields with my own eyes, I can tell you that the same could be learned there today.

In 1919 John Steinbeck graduated from Salinas High School, and enrolled in Stanford University where he would study for five years, and leave without a degree. Travel is often a stimulant for wisdom, and so John travelled, and he'd head to New York City - he'd work odd jobs, write, and fail to get anything published. Tiring of the failure, he returned to California working such menial jobs for such a great mind, that you'd hardly believe it were I to type them out for you - BUT, as tour guide for a fish hatchery, he'd meet his first wife. John Steinbeck and Carol Henning would marry, and they'd live in a family owned cottage for the entirety of the Great Depression, his parent's gave him free room and board, and loaned him enough money to where he could quit his job in a warehouse and focus on writing.

The efforts and loans made in good faith and the knowledge of the talent that their son had paid off for the parents of John Steinbeck, and for us all, and he'd publish Tortilla Flat - in 1935. John, his wife Carol, and friend Ed Ricketts would voyage in the Pacific to collect biological specimens, and John would pen a book about it, The Log from the Sea of Cortez., but his marriage was falling apart, and would end upon the book's publication in 1941. John would then marry another woman named Gwyn Conger, and with her the couple would have two sons, Thomas, and John.

The Life And Travels Of John Steinbeck

Post war, Steinbeck would travel often to the Soviet Union, and perhaps he identified with the communist ideal? Sue me - I do too. Visiting Moscow, Kiev, Tbilisi, Batumi and Stalingrad with photographer Robert Capa, the two would publish A Russian Journal and be two of the very few Americans that had been able to visit the Soviet monster state after the transition.

By 1948 John's second wife was sick of his travelling for his work, and she'd divorce him, and he'd directly marry his third wife, Elaine Scott.Sometimes the third time really is the charm, and John's third marriage would be the right kind of marriage, and only at his death would they part.

He'd spend the first several years of their marriage in deep depression as his best friend, Ed Ricketts, had been in a car that was hit by a train, and had died. Ed had been a major influence on John, and from the beginning of his literary career.Ricketts was a naturalist, and his love of ecology had affected John thoroughly, at least four of the John Steinbeck novels featured a character that was based entirely upon the very real Ed Ricketts. When Ricketts passed away - the writing of Steinbeck declined considerably.

In 1966, Steinbeck traveled to Tel Aviv to visit the site of Mount Hope, a farm community established in Israel by his grandfather, whose brother, Friedrich Grosssteinbeck, was murdered by Arab marauders in 1858, roughly one hundred and ten years following the Steinbeck forefather's death in Israel, and on December 20, 1968 - would pass John Steinbeck,of congestive heart failure - he'd been a lifetime cigarette smoker, and a literary master of the English language that was throughout his life a champion of the poor, and of human dignity in a world controlled by super wealthy oligarchs and their demonic spiritual masters.

Ernest Hemingway - The Great Man - Posing For Himself In A Mirror

One of the most respected of John Steinbeck's novels, The Grapes Of Wrath, had been published in 1939, and had given him a lot of respect and monetary success. John was a few years younger than was Ernest Hemingway, and they had shared some very real mutual admiration. John admired Hemingway's short stories. and Papa Hemingway thought the war reporting of John Steinbeck was brilliant. The truth of all this seems to be that Hemingway saw Steinbeck as a threat, and as great a man as Hemingway was, and as talented a writer as he will forever be remembered as, Ernest Hemingway had massive issues with his own masculinity, and felt some bizarre need to always show dominance over everyone.

They met for dinner with some friends. They drank, and Ernest Hemingway, of course, got drunk - and the evening ended very badly with Ernest Hemingway breaking someone else's cane over his head, and throwing the pieces at the owner. John Steinbeck was not impressed, and John Steinbeck was not the sort of man to have issues with his masculinity - Steinbeck had no need to show that he was a man, and as the story goes - came very close to losing his temper, and damaging the Hemingway face, and ego with fisticuffs....er..he'd wanted to smash his face, but his wife prevented it.

And In East Of Eden, Steinbeck Said:

"In my time, Ernest Hemingway wrote a certain kind of story better and more effectively than it had ever been done before. He was properly accepted and acclaimed. He was imitated almost slavishly by every young writer, including me, not only in America but in the world. He wrote a special kind of story out of a special kind of mind and about special moods and situations. When his method was accepted, no other method was admired. The method or style not only conditioned the stories but the thinking of his generation. Superb as his method is, there are many things which cannot be said using it. The result of his acceptance was that writers did not write about those things which could not be said in the Hemingway manner, and gradually they did not think them either."

Sadly, Ernest Hemingway never said anything positive about John Steinbeck in public at all. Though this is all very sad - we are each who we are, and some of our traits make some of us very great at some things, and some of our traits that give us the greatness that we have, leave us in the eyes of others with different greatness - incomprehensible, or even "weak." It is the strength of love that is superior to the ego, and so it is said that love conquers a multitude of sins. Ernest Hemingway and John Steinbeck both were great authors, and to each their own. I'm calling this score Steinbeck 1 Hemingway nada.

The Novels Of John Steinbeck Available On Amazon.com 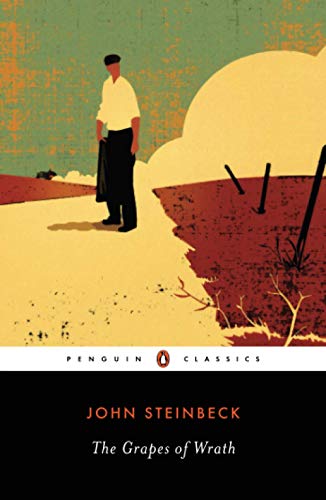 The Grapes of Wrath
Buy Now

The Literature Of John Steinbeck

John Steinbeck published twenty-seven books, including sixteen novels, six non-fiction books and five collections of short stories; Steinbeck received the Nobel Prize for Literature in 1962. Often the work of John Steinbeck was centred around Mexicans and Mexican American immigrants to the USA - the poorest of the poor, with the exception of, possibly, African Americans. He also wrote a series of California Novels, and those pertained to Dust Bowl era Great Depression Americans of European poor decent. Always he would extrapolate upon the plight of the poor, and he'd sometimes include scenarios and ending so shocking that one would be left (edit: "one" - referring to yours truly) wondering at just how he became so accustomed to tragedy so explicit.

I'd recommend to any reader from any nation of any age and at any time such classics as In Dubious Battle, Of Mice and Men and The Grapes of Wrath.- his two best known works, but also, The Pearl. For The Grapes Of Wrath he'd win the Pulitzer Prize for Fiction, and create a true American literary iconoclast of a character, Tom Joad. His Nobel Prize for literature was awarded for:

"realistic and imaginative writing, combining as it does sympathetic humor and keen social perception."

Always humble, when asked if he deserved the Nobel Prize, John Steinbeck replied,

Then in his acceptance speech he'd express,

"....the writer is delegated to declare and to celebrate man's proven capacity for greatness of heart and spirit—for gallantry in defeat, for courage, compassion and love. In the endless war against weakness and despair, these are the bright rally flags of hope and of emulation. I hold that a writer who does not believe in the perfectibility of man has no dedication nor any membership in literature."

John Steinbeck, flawed human being that he was - never failed to recognize that probably, his true greatness came from his fine upbringing in the Episcopal church, and the devout parents that had put him into the position in those Salinas, California crop fields to see, absorb, and witness humanity for what it was - a tragic Petri dish where we all have the choice to be a greed and pride filled ego monster, or to be someone great, someone kind, someone who loved his neighbour as he tried to love himself, like John Steinbeck. Rest In Peace - you tremendous and talented man.

"Man himself has become our greatest hazard and our only hope. So that today, St. John the apostle may well be paraphrased: In the end is the Word, and the Word is Man—and the Word is with Men." - John Steinbeck.

John Steinbeck - The Memorial Plaque For An Outstanding Human Being

Music Inspired By The Characters Of John Steinbeck's Novels