A Book Review on Jonathan Kirsch’s God against the Gods: The History of the War between Monotheism and Polytheism

God Against the Gods: The History of the War Between Monotheism and Polytheism

Jonathan Kirsch’s God against the Gods: The History of the War between Monotheism and Polytheism

Religion and people’s belief on God or Gods have stirred the world since people and their strong faith in God always held power in it. Religious leaders have gained tremendous power and influence globally that it is of no question that they also have political influence in many aspects. With the appearance of many religions and beliefs, it is a great question as to how monotheism and polytheism can change the world and how it could have stopped wars. It can be asserted that the history of war between monotheism and polytheism has impacted the world politically and in many other aspects.

Jonathan Kirsch is an author of 13 books which consist of two books on law, eight books on biography and history, and two novels (jonathankirsch.com, 2004.). He is also a member of the National Book Critics Circle and member of the Authors Guild and he has served as the President of the PEN USA. He is known to be a columnist and a practicing lawyer of publishing rights as well.

And the Book Speaks Not Against the Gods

In his book God against the Gods: The History of the War between Monotheism and Polytheism, Jonathan Kirsch explores the social evolution from polytheism and monotheism in the West as he focuses on the actions of Emperor Constantine as well as the death of Julian who played essential roles for Christianity to become the state religion of the Roman Empire (Cline, 2014) It has also been fairly emphasized that this book is not a book about religion but instead about “political intrigue, religious cynicism, and real people who had very real lives, passions, and sometimes very messy deaths.” This is not an attack on religion and philosophy but on the political motives and the people who worked and died behind it. It can be asserted that this book is not merely an attack on either monotheism or polytheism but is a clear illustration on how politics stirs behind religious movements.

He proposes that the leading monotheistic religions are liable for history’s bloodshed because of their claim for exclusivity of the absolute truth (beliefnet.com, 2014). Although in his biographical accounts it was mentioned that he explored the monotheistic religions, his own religion is not indicated. Despite that, this cannot be taken against him to be a form of bias since if ever he does not have any religion; he really was an objective analyst of the situation detached from the claims of any of the monotheistic beliefs.

The author’s main proposition can be encapsulated through his statement where he said that “At the heart of polytheism is an open-minded and easygoing approach to religious belief and practice, a willingness to entertain the idea that there are many gods and many ways to worship them. At the heart of monotheism, by contrast, is the sure conviction that only a single god exists, a tendency to regard one's own rituals and practices as the only proper way to worship the one true god. The conflict between these two fundamental values is what I call the war of God against the gods — it is a war that has been fought with heart-shaking cruelty over the last thirty centuries, and it is a war still being fought today.”

This statement shows the difference between these two religious’ movements. It can be asserted that this claim can be observed and is highly valid since monotheism limits and imposes while polytheism embraces the possible gods and goddesses and does not restrict people on who or what they want to worship. The manner of restriction and imposition of one god to be worship creates problems and violence that the very purpose of the religion is already defeated. With all of the religious beliefs in the world today promoting monotheism, it would be of no surprise if they attempt to impose what and which is correct. If polytheism prospered until now, there would be no conflicts as such because gods and goddesses will be welcomed and there would be less of restrictions as compared to how it transpires nowadays.

At some point, this can be related to political movements. For the emperor to be heard and to be the absolute power, one god should be imposed on the colonies or empire. It is clearly connected to the political movements as well. It should also be noted that the Early Christians were not killed because of their faith but because of breaking laws. It should have been realized as well that monotheism overshadows all others. Political involvements including Constantine, who embraced Christianity for his political ambitions and Julian the Apostate who converted to paganism because his family was killed by Christian emperors who should have perpetuated the idea of polytheism clearly shows that monotheism is no doubt drenched with stains of ambition for power and violence (American Library Association ltd. by amazon.com 2004.). It is of no wonder that there were a lot of killings because one’s faith which rather worked contrary to the values upheld by these religious beliefs. It is also noteworthy to consider that 911 tragedy roots from one of the oldest traditions of monotheism (jonathankirsh.com, 2014).

Given all the points raised, it can be asserted that the thesis is well-developed and supported by the evidences and fine points presented by the author. Historical accounts and even events that transpire in the present time were connected and related to the claimed proposition. He mentioned existing names and political leaders who were indeed involved in the killings and violence just to uphold their political motives.

I chose this book because I find the conflict between monotheism and polytheism interesting. With my explorations on various religious beliefs, it clearly shows that religion is not just about faith but is also charged with political motives and ambitions that the believers who seem to be blinded with their faith fail to see. I find the transition from polytheism to monotheism intriguing as well and how it changed the society in a general sense. People started worshiping pagan gods and other number of gods and goddesses until the movement of so-called civilization and imperialism that a part of the instruments used to make their colonies follow without asking for reasons is religion. Through their faith, the total submission of the colonies was achieved. With that, I chose this book and I think I did not make a wrong decision since it gave me answers to my questions.

I agree with the author’s propositions since the evidence presented are valid and logical. The author was clear with the thoughts that he wanted to send across. He has been an established writer about religion and history which gives him the credibility. The materials used as evidence in the book were mostly historical in nature. Although bias can never be totally eradicated, it can be assured that there would be less of it when it comes to historical accounts which really transpired in real life.

The book is well organized. It is divided into two books namely The God that Failed and The War of God against Gods. He started with an introduction of paganism and other gods and then shifted to the conflicts and transitions that arose. Although it could be mistaken that he is siding on the pagan belief, in this time, we need a perspective that outside the lenses of the major monotheistic religions to get to see the overall view of the world without our faith interfering.

Departing from the content of the book, externally speaking, it has an interesting cover which could be related to ancient art. With a first look, it could be mistaken for a fiction book with its classy layout. It has 352 pages and weighs 10.4 ounces with the dimensions of 5.6 x 0.8 x 8.5 inches which can be still be considered as handy (amazon.com, 2005).

Given all these points, I could recommend this book for reading since it was written with ample evidence and a strong thesis. It could challenge your misconceptions and existing perceptions about religious matters by introducing the political realm on the seemingly all-faith ground of religious history.

Cline, Austin. (2014). "God Against the Gods: The History of the War Between Monotheism and Polytheism." About. About Religion, Web. 8 Dec. 2014. <http://atheism.about.com/od/bookreviews/fr/GodAgainstGods.htm>.

Jonathan Kirsch’s God against the Gods: The History of the War between Monotheism and Polytheism 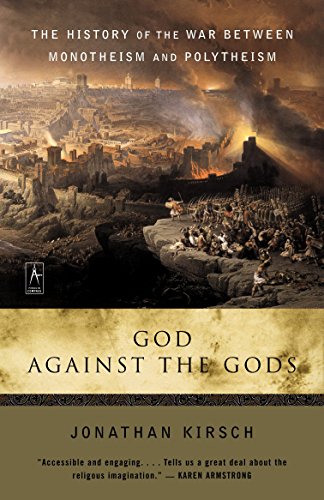 God Against The Gods: The History of the War Between Monotheism and Polytheism
Buy Now