In the summer of 1967 Joni and her family were having a day out at Chesapeake Bay in Maryland. The day was meant to be a fun, family day out. But 17 yr old Joni dived into the lake, misjudging the depth of the water, and hit her head. What happened next would change her life forever. Joni fractured her spine, in between the fourth and fifth cervical levels, and became quadriplegic from just below the shoulders down. From this day onward, she would spend the following 2 years in rehabilitation. During this time she would experience a whole range of feelings, including depression and suicidal thoughts. At one point, she even asked her friend to help her die.

As a Christian, Joni also questioned her faith. There were so many questions. Why did God let this happen? Why hadn't he healed her? Joni had prayed and asked for healing. Even if she didn't get the use of her legs back, at the very least, she hoped God would answer her prayers and let her use her hands. At least she would be able to do things. But this didn't happen.

The book is less about her accident and her disability, but more about her Christianity and how her faith in God has helped her come to terms with her disability and lead the life she believes God had planned for her. But she also talks about much more personal things, like boyfriends, marriage and intimacy. She also talks about how people perceived her in the wheelchair. She often talks about how people talked to her like she wouldn't understand what they were talking about. She had to overcome people talking to her like this and points out that she, like an able bodied person, is capable of conversing too. Joni had to adjust to a whole new way of living. She not only learned to paint and write using her mouth, but also learned to rely and trust in God and put her complete faith in him. The book covers the first 8 years of her life as a quadriplegic and her journey in her Christian faith.

I remember reading this book many years ago, but decided to re-read it again. She has also wrote and sang several songs, which I also listen to. I find this book really inspiring. I think most people question their faith at some point during their lives, but reading this book has taught me that there are people out there that really do have things happen in their lives to make them question this. I can't begin to imagine what she went through as a 17 yr old young woman. At that age, your whole life is ahead of you, but to have it change in a split second is beyond comprehension.

Joni is truly a woman of the Lord, and by reading this, we learn that through her faith, she has learned that her disability can help others in a similar situation as herself. The book I bought was published at a later date, although as I say, originally published in 1976. At the back of the book there is a small chapter about her charity, 'Joni and Friends,' which helps people in similar situations. There are 16 chapters in the book altogether. There are also a few pictures halfway through so you can get an idea of Joni's recovery journey and where her life is now. It's a definite 10/10 from me. 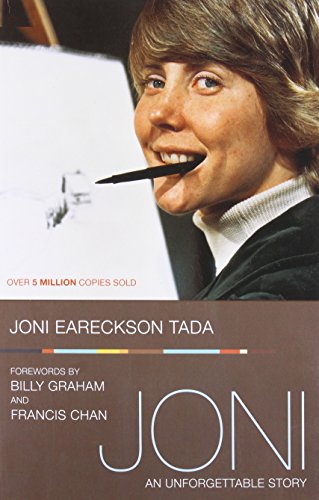