Patty reviews thousands of textbooks, novels, articles, music works, and films, but will one day write a book herself.

Interestingly, the famous Chinese artist Kao K'o Kung was in charge of Workforce Development in ancient China under the rule of the Mongols.

KKK moved to what is now Peking and then to Hangchow. His uneventful government post was Supervisor at the Ministry of Occupations at age 28, followed by another as head of Ministry of Justice until he was 62.

Apparently, he painted only occasionally, if at all. During wine parties, he sometimes improvised his subject matter. KKK nearly aways refrained from signing his paintings. Kao K'o Kung, Chao Meng-fu, Shang Ch'i, and Li K'an made up the Four Masters of the Early Yuan period.

Kao K'o-kung perfected his painting of Chinese landscapes and bamboo scenes in shades of the same single color.

He specialized in mountains in mysterious fogs and rain and one of his paintings is presented to the right.

Kao K'o Kung was said to be the single painting master in the north of China to whom no one else could come close in the quality of their works. The other arts masters of the period said this themselves.

It is for all these reasons that the former Good Living Editor for the Detroit Free Press, having covered Chinese Period Art extensively, chose this name - Kao K'o Kung - for the moniker of the cat with extra whiskers and an extra sense that would be the lead detective in The Cat Who Mysteries from 1966 - 2008.

In her early marriage, LJB wrote a short story to work through the death (murder, actually) of her pet cat Koko.

Titled alternately as The Sin of Madam Phloi and The Revenge of Madam Phloi, the story is set in a rather tall apartment building. Siamese mother cat Madam Phloi has a male kitten (LJB's Koko). A fat male neighbor does not like cats. At an opportune time, said nasty neighbor pushes the kitten over the ledge to his death.

Madam Phloi waits for her own opportune moment and manipulates the killer into falling to his death over the same ledge. The connection between Madam Phloi and the revenge killing of the anit-Siamese neighbor cannot be proved.

Thus begins the series of Koko the cat detective that has extra whiskers and his Detroit ("Down Below") newspaperman friend with the over-sized mustache - James Mackintosh "Qwill" Qwilleran. They both sense things through their whiskers and solve mysteries when the police cannot do so. An addition to the family, petite Siamese Yum Yum helps whenever she can.

Coming back from alcoholism and the death of his ex-wife in a mental sanitarium, Qwill inherits a Bill Gates sized fortune from his mom's friend Aunt Fanny up in Pickaxe City, Michigan - 400 Miles North of Everywhere. With this event, he becomes a 1960s - 2000s John Creasey's "Toff"; but, not as modern as David Housewrite's Minnesota 21st Century rich man, Rush McKensie with bullet riddled fancy car.

Four decades of The Cat Who... mysteries began with The Cat Who Could Read Backwardsin 1966 Three murders were solved in that first novel, a period piece about Detroit and northern Michigan and their colorful characters. The author has included newspeople, college students, artists, Hippies, drugs, jealousies and turf battles in an engaging way. There is some blood and several late night "accidents", but not much gore. It is more subtle than that.

Having given up completely on marriage and almost on women entirely, Qwill does not indulge in sexual escapades, but has a series of romantic interests that settles on one or two women throughout the series of novels. Sex is generally implied "off screen" as it were, for all the relevant characters.

The crew of the ensuing series are as loved by their fans as the cast of The Red Green Show is by theirs and it is a wonder that television has not produced a weekly series of it. Many readers feel that Tom Selleck would have made an admirable Qwilleran.

As a professional editor and reporter herself, LJB has not included much profanity in her novels and has continued to write them on yellow legal pads in pencil. While some pundits speak of them as "old lady" stories when compared to movie themes like those of Grind House, there is room for both and some people like neither.

Perhaps there should be less denigration of others' works and more attention given to one's own writing improvement, hmmm?

The stories through the mid 2000s have offered interesting characters, regional legends, art criticism, antique provenance, puzzles, and coincidences that entertain readers who enjoy such things. Two cookbooks of recipes from the mysteries are very good and have sold many copies. A book of related Pickaxe City/Moose County legends has been well received and is a collector's item. Other "accessory" kinds of books include The Cat Who Companion, a type of concordance, and others.

The Cat Who Could Read Backward

At the beginning of this story, Qwill, a former WWII correspondent, has been through alcoholism and a failed marriage of madness, the beginning of recovery, and the realization that he needs to find work again.

He was an expert at crime reporting and criminology writing previously, but once back on a newspaper in a city that is presumably Detroit, he is assigned to Arts and Fine Living, as well as Food. It's an education.

Qwill has no family left, but finds his childhood friend from Chicago to be the Features Editor at the local newspaper - a metaphor for the Detroit Free Press. Jim learns a bit about art and art criticism, as well as about the odd art critic who has only one hand and a strange Siamese cat in a house that looks like it is a stage set from TV's The Addams Family of the same time period..

Living in several odd and interesting places each year, Jim Q. finally moves into an apartment in the home of the art citric - George Bonifield Mountclemens III - and gets to know the astounding Koko.This Siamese waits for the daily paper and places his nose on each headline and sentence of each page, moving it from right to left until he is done with the paper. No one may have it until he is finished.

The author supports Steps to Hope in North Carolina. it is a foundation that helps the victims of domestic abuse and violence, just as Qwill has helped them in the novels from time to time.

The underworld of fine arts pokes its head up from the sewer in this novel.

LJB shows us counterfeit art pieces, artists that do not exist, and murder in the name of art and the selling of it for large sums of money.

The novel also portrays a 1960s "Happening" - a participatory living art piece framed inside a big party. It includes things like monster statues, confetti, umbrellas, steamers, rock music, and other materials for partygoers to release, throw, and fall onto.

Murders occur at a high-end retail art store and gallery, while a strange half-painting of a monkey is stolen. When joined to it's other long-missing half, it is worth a fortune, but no one knows where it is.

A murder happens at the Happening.

A third murder happens in the winter patios of the Mountclemens house as well.

Koko sense all of these things and howls like a banshee at the moment of each death.

With nowhere to go, Koko, is adopted by Jim Qwilleran, and a lifetime of murders and detecting ensue.Yum Yum is a tiny Siamese kitten thrown out of the house into the streets by an art collector of Asian pieces and a hater of cats, and Qwill and Koko take her in as well. They live in different places everywhere in the eastern United States, it seems and collect murder stories and lifelong friends as they go. from Florida to New York to Minnesota.

Each story contains at least one murder puzzle to be solved with the help of Koko, who seems to be able to pick words out of the dictionary, read book titles apropos to the murder occurring and and play 3-4 bars on the piano of songs with lyrics that give clues

The books are fun. The only reason I put off reading them was their 1990s' fluorescent covers that hurt my eyes. I don't recall how or where I acquired the first one, now, but it was not until 2003. I say to ignore the covers and have fun with the stories.

You may wish the people were real and, as in real life, important characters die off or are even murdered. They are remembered in subsequent novels, even at the addition of new characters.

Lilian Jackson Braun Bettinger, 97, author of The Cat Who mystery series for more than 40 years, died of natural causes on Saturday June 4, 2011, at Hospice House of the Carolina Foothills in Landrum, S.C.

She had lived in Tryon, North Carolina for the past 23 years. Ms. Braun’s first husband, Louis Paul Braun, died many years before her.

Ms. Braun wrote all of her books in long hand. They were published with limited editing. "I don't pay attention to the publishing business. I just write my kitty-cat stories."

"She died with one regret," her husband (Earl Bettinger, actor) of 33 years said Monday. "Because of her failing health, she was unable to finish her last novel, The Cat Who Smelled Smoke. She regretted it most of all, because so many fans wanted another book,” he said.

Donations may be made any time to Hospice House of the Carolina Foothills, 260 Fairwinds Road, Landrum, S.C. 29356

Life Of The Author

Ms. Braun's personal life was largely a secret before she died, including her parents and first marriage; however, some history is available at the Tryon website at the link to "news." I loved that Ms. Braun wrote her first poem at age 2, became a sports-poem spoem writer for the Detroit Free Press at age 17 and never stopped writing until she was too sick to write.

Her first short story was written to work through the grief of the first kitten she had, thought to have been pushed out an apartment window by a cat-hater in the building. The story is a ery well suited triumph over that incident and appears under two titles: The Revenge of Madame Phloy and The Sin of Madame Phloy.

One of my favorite Cat Who books is The Cat Who Moved a Mountain, about the wonderful people of the Potato Mountains in North Carolina - those are really the Blue Ridge Mountains and I know how wonderful those people are.

I am glad to have known some of Ms. Braun's spirit through her writing. She was a welcomed addition to the world while she was here.

Tryon in the Blue Ridge Mountains 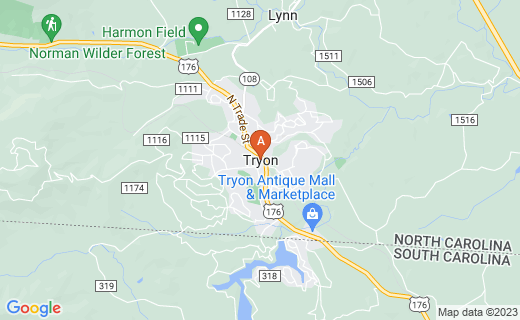