I first read this book when teaching a year six class in England about ten years ago. At the time it was being used as a transition text between primary and secondary school. I must admit I had never heard of the book before then and spent some weeks apparently mispronouncing the title (it is Kens-key not Ken-sue-key). We read it together and it started off ok, but it didn't grip me straight away, it took a little while to get going, but by the end I was totally hooked and so were the class.

England, a Boat and Sailing the World

The story begins with a young boy named Michael, living in England, playing soccer with friends, and sailing with family, living a fairly normal middle class life. But things change when his Mum and Dad are made redundant after the Brick factory where they work closes, and the family circumstances change overnight. The happiness seems to drain away, Dad is travelling searching for jobs, and the future looks bleak for the family.

Then one day Dad comes home and announces he has sold the house and bought a boat so they can sail around the world and find their happiness again. His Mum is angry at first but slowly comes around to the idea and they all move down to the coast and meet their boat, the 'Peggy Sue'. After a few months of intensive lessons sailing on the open ocean, Michael, his Mum, Dad and their dog Stella set off on their journey.

At this stage the story telling style changes to a diary. Michael is tasked with writing a journal of his travels as a way of maintaining his education. We hear descriptions of storms, wildlife and places they visit as well as issues with their boat. Eventually they reach Australia and his Mum falls sick. After sometime in hospital they are able to move on again. As they are sailing in the south Pacific area, Stella gets loose on deck at night and his soccer ball goes overboard. Michael goes to get her but does not have his lifejacket or harness on. The ship veers and he falls overboard and is lost.

Here the story changes again. Michael wakes up on a beach, with vague memories of being pulled from the water onto a boat. Stella is on the beach too. After a bit of exploration, he realises he is on an island. He looks for water and food but is unsuccessful. He eventually falls asleep in a cave, hungry. When he wakes he finds Stella gone. He searches for her and find she has found food that seems to have been mysteriously left for them. Michael eats the bananas that are left and drinks the fresh water, but can see know sign of who has left it. This continues and the mysterious stranger leaves blankets for him too to protect him from the mosquitoes.

Michael decides he needs to try to get help so he builds a fire, however when he lights it the mysterious stranger appears shouting in a strange language, indicating he should not start a fire. He puts out the fire, then draws a map of the island in the sand and divides it in two, giving Michael half and keeping half for himself. After a brief introduction in broken English where Michael is told 'I Kensuke. My island.' He then walks away, leaving Michael confused and angry, unsure what to do as he wants to be rescued but does not want to anger the man who is suppling his food.

Kensuke continues to leave food for Michael but they have no contact. It is clear Kensuke watches Michael though as he leaves him a sheet to protect him from the mosquitoes. Michael begins to find his feet on the island, but follows Kensuke's rules. Then one day he sees a tanker in the distance and his resentment towards Kensuke for not allowing him a fire resurfaces. He begins to build a secret fire on one of the hill tops in case this happens again.

One of Michael's few pleasures on the island is swimming in the ocean. Then one day after a storm, Kensuke appears, shouting at Michael, telling him 'Dangerous!' and 'No swim!' As Michael can see no danger he doesn't move so Kensuke wades out to him and pulls him in. This causes even greater resentment. One day soon after he sees another boat and tried to light his beacon, but Kensuke again stops him. Angered by this, he runs into the ocean to defy Kensuke and is stung by jellyfish.

Here the story changes again, and it is here that you really begin to get sucked into the story. Michael awakes in Kensuke's cave. He is badly stung and Kensuke cares for him, nursing him back to health. For a time there is silence between the two, but over many weeks they begin to trust each other. Kensuke teaches Michael to paint and fish, Michael teaches Kensuke English.

After a time, Kensuke tells Michael his story. We learn he was a Japanese sailor in World War 2. His ship gets washed ashore on the island and he survives. He hears on the radio about the Atomic bomb dropping on his hometown of Nagasaki and he decides to stay on the island as he is sure his wife and son would have been killed by the bomb. He has learnt to care for the orang-utans on the island and they are his family.

Over time Michael and Kensuke grow close and eventually Michael persuades Kensuke that if the opportunity arrives they should both leave the island. However, soon after poachers come and kill some of the animals, which convinces Kensuke he needs to stay.

One day as hip comes and Michael lights a fire with Kensuke's consent. The boat sails in and it turns out to be Michael's parents on the 'Peggy Sue'. Kensuke makes Michael promise to not tell anyone about him for ten years as he figures that by then he will be dead. This is a very sad moment in the book and even some of the toughest children I have taught are moved by this. There is one further twist in the story but I will not give that away. Suffice to say that if you are able to read the entire book without feeling at least some emotion then I would be very surprised. 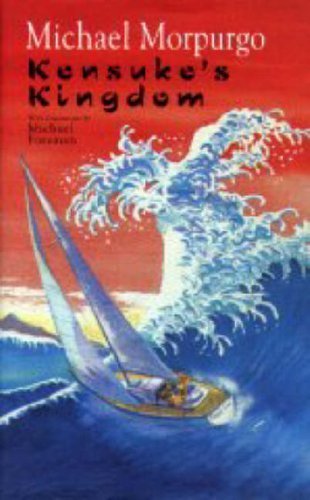 I said at the beginning of this review this is one of the best children's books I have read and I firmly stand by that. It does take a little while to get going but it is worth persevering. I have used this several times with classes in England and Australia and it has never failed to completely engage the class and it has left many children speechless at the end, asking if this is a true story as it is very convincing.

The great thing for teachers is that there are a lot of quality resources out there to support this book due to it being used so commonly as a transition to high school book in the UK. In fact, the authors own webpage contains a free downloadable teaching resources booklet. Kensuke's Kingdom lends itself so well to several cross curricular links, with ties to World War Two topics, geography links and obviously literacy. Also on some early editions, the cover art, which seems to draw heavily on 'The Great Wave off Kanagawa' by Hokusai, can be used as a lead in to art activities. I recommend it to all teachers in the higher end of primary schools (years 5-6) and to parents of children of that age. In fact I recommend it to everyone who likes good books!

Michael Morpurgo Talks About His Writing

Have you read Kensuke's Kingdom?