Finding the Right Book for Your Child

Some children love history, and want to immerse themselves in historical fiction to find out everything they can about a period. Others may have a specific interest in a narrow field, such as spies or military technology, which can make finding an appropriate book more challenging. Read on for age-appropriate suggestions for Colonial Period and Revolutionary War novels for your child.

Ben and Me is a true classic: originally published in 1939, adapted for film and picture books by Disney, yet still in print today. It tells Ben Franklin's story from the point of view of a mouse named Amos, who lives in Ben Franklin's hat. Of course, Amos takes credit for a good many of Franklin's innovative ideas, including the wording of the Declaration of Independence. Two-thirds of the book takes place in colonial Philadelphia, affording children the opportunity to experience the colonial period and the preparations for war, but the other third takes place in France, and tells the story of Franklin's time as an ambassador seeking to secure funding for the fledgling U.S. forces in their fight against the much more powerful British. Franklin's important contributions to the war effort are often overlooked in children's study of history, so this book, silly as it undoubtedly is, is an invaluable resource. Ben and Me is considered to be written at a fourth-grade level, but you can share it with children as young as kindergartners by reading it aloud and sharing Robert Lawson's excellent original pen-and-ink drawings.

The American Girl series provide uplifting historical stories for young girls, and Felicity's series is no exception. Meet Felicity is the first book of a six-book series set in Williamsburg, VA, in 1774. Felicity Merriman is a nine-year-old girl who would rather be riding horses than laced up in elaborate dresses, learning to dance the minuet. Later in the series, Felicity must decide whether to become a Patriot and risk alienating her best friend, who is part of a staunch Loyalist family. The Lexile levels for the series are in the 600s, making them just right for third- and fourth-graders.

Looking for a historical novel with contemporary flair? Try reading about the time-traveling kids in George Washington's Socks, by Elvira Woodruff. A group of ten-year-old boys and a tagalong younger sister find themselves accidentally transported into the middle of Washington's historic crossing of the Delaware, on the eve of the Battle of Trenton. With just enough blood and military authenticity to keep boys interested, but not so much that it grosses out the girls, this book is a winner for all kids fourth-grade and up.

If you've got a fourth- or fifth-grade girl who is a reluctant reader, try Emma's Journal by Marissa Moss. Emma, a ten-year-old girl in Boston, tells the story of the early days of the Revolutionary War in an illustrated diary format. 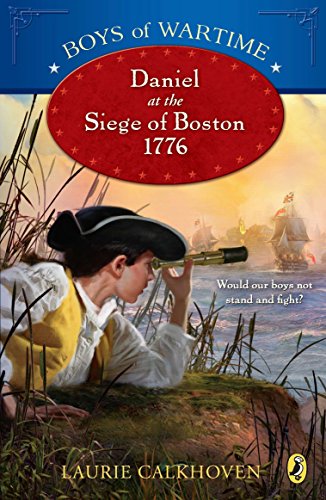 Boys of Wartime: Daniel at the Siege of Boston, 1776
Buy Now

So many historical novels for kids and young adults are aimed at girls, but here is one for the boys in your life. Daniel at the Siege of Boston, by Laurie Calkhoven, tells the story of 12-year-old Daniel as his father and brothers go off to fight with the Patriot army. He must be the man of the house, helping his mother run the family business, a tavern frequented by British soldiers. He's in a unique position to learn enemy secrets, and is soon tapped to become a spy, slipping through the British lines around Boston to bring urgent messages to General Washington. There are some tense, violent moments during battle, and Daniel's fear is emotionally portrayed, making this book most appropriate for children in fifth grade and beyond. If your younger son is interested, consider reading it together and discussing the more harrowing scenes.

Another classic, Newbery Medal-winner Johnny Tremain, by Esther Forbes, remains just as powerful today as when it was published nearly 70 years ago. Johnny is a 14-year-old apprentice silversmith in Boston until he becomes injured and is drawn into the burgeoning war effort as a messenger for the Sons of Liberty. John Hancock, Samuel Adams, and other prominent patriots and their roles in the war are featured. Middle-schoolers will appreciate this coming-of-age story.

Chains, by Laurie Halse Anderson, tells the story of the Revolutionary War through the eyes of a 13-year-old slave girl in Rhode Island and New York. While the country fights for its freedom, Isabel must fight for her own, as well. The level of detail and length of the book make it most appropriate for middle-schoolers and teens. This book is the first part of a trilogy, and was a National Book Award Finalist in 2008.