Leland is a patriot, a student of history, and a lover of freedom and truth. He enjoys sharing the fruits of his learning with others.

Killing Reagan: The Violent Assault That Changed a Presidency

John Hinckley's assassination attempt of President Ronald Reagan on March 30, 1981 was certainly violent, and undoubtedly changed the Reagan presidency. However, it is author Bill O'reilly's assault on President Reagan that concerns me.

The book begins well enough, painting a vivid scene of Reagan's last moments in his Bel Aire Los Angeles home. His wife, Nancy, is there holding his hand. O'reilly describes the "death rattle", that shallow, raspy breathing that occurs in the last moments of the dying. He describes how Reagan opens his eyes and looks directly at Nancy with a wordless, profound expression of love. The former president had lost the ability to speak years earlier, but those that were there with him in the end described him as cognizant and at peace. That, I believe. The description rendered by the author (s) was a great introduction: respectful, dignified, true. Had the book maintained that tone throughout I would not have come away feeling like I'd wasted my time.

Footage and Commentary of Assassination Attempt

#1. O'reilly uses a back and forth method not uncommon in literary styles. It's a technique I appreciate as the author takes us from the present back to the past, present-past, and so on. This technique buttresses historical events by providing a hindsight view of what brought the characters to a particular point. The problem here is that O'reilly spends an inordinate amount of time in the past focusing on Reagan's indiscretions. O'reilly informs the reader that Reagan was "a playboy," and that he "liked to look at women," and those are the mild examples. The author further dares to delve into actual pillow talk between Reagan and one of his liaisons that I found illicit, even profane. This is not the Ronald Reagan I grew up admiring. Not only is this brand of journalism tawdry and cheap, it isn't fair. We don't really know what people said behind closed doors during such trysts. In one particular example O'reilly cites a starlet who wrote about her physical interactions with Reagan providing the text to a discussion she allegedly had with him during the act, a discussion Reagan is not here to defend or deny.

On another occasion the reader is provided a description of then Governor Reagan walking beside a pool at a hotel. A young girl sits by the water looking sad. Reagan strikes up conversation with her. The rest is left to the imagination, but O'reilly informs us that the girl goes on to proclaim that she and Reagan would carry on a years long affair. There is no proof of this. People didn't believe it then, Reagan denied it, and more than anything the presence of this paragraph in the book provides absolutely nothing for the enhancement of our understanding of the claimed purpose of this book! It has nothing to do with "Killing Reagan." It is purely gratuitous, sensationalized fodder that adds nothing to the story, in fact, it detracts, and there is an abundance of this throughout the narrative.

Descriptions of world leaders are inaccurate and disrespectful. O'reilly describes Margaret "The Iron Lady" Thatcher as "homely and buck-toothed." In truth, Thatcher was neither, but even if she was I ask you- is such a description necessary? Is such a description worthy of a world leader that helped create a fiscally sound UK and stood up, with President Reagan, against the increasing military threat of the Soviet Union? On the other hand O'reilly is extremely gracious in his description of Mikhail Gorbachev. There are far less flattering physical descriptions available for that man than for Thatcher, but O'reilly does not provide them.

"The Gipper" and "The Iron Lady" Shared a Deep, Mutual Respect for One Another

It isn't that there's "nothing" new in this book. There is some information I hadn't heard. The details of Hinckley's childhood as well as the content of some of his letters were of some interest, but not enough to justify investing yourself in the reading. I wanted to stop after about the 4th chapter, but I continued because I wanted to warn potential readers.

Former President Reagan Discusses the Assassination Attempt on his Life with Larry King. Gentle, Kind, Compassionate. That was Reagan.

"I added him (John Hinckley) to my prayers for healing. I thought if I'm going to ask for healing for myself, perhaps he needs healing too."

Since There are no Negative Integers Available I am Forced to Give This Book a 1, 1 Star More Than it Deserves

I have read two of O'reilly's other efforts in his "killing" series. Killing Jesus and Killing Lincoln were both reputable, solid works. I found Killing Lincoln to be especially interesting as it provided new and interesting facts in a lucid writing format. Killing Jesus wasn't bad, but there were actually some errors in it. At one point O'reilly attributes dialogue spoken by Pilate to Jesus and vice-versa. I was willing to let it go chalking it up to O'reilly being more of a historian than a theologian. However, for this work I give no such quarter. O'reilly even states in the epilogue that he and co-author Martin Dugard were careful to make sure all quotes were backed by at least two sources so "we wouldn't put anyone in a bad light." But Bill- you did put people in a bad light. This is especially sad given the fact that O'reilly himself has been accused of sexual misconduct during his tenure at Fox News. Are such accusations permissible because they are stated by more than one source? Hardly.

Furthermore, O'reilly includes events in Reagan's waning years that would embarrass him; details of public incidents where he appeared to be confused or disoriented. O'reilly also seems to be attempting to discredit some of President Reagan's achievements, most notably an assertion that it wasn't really Reagan's assumption of power that freed American hostages in Iran after 444 days of captivity, but rather O'reilly attributes the release being a result of some murky financial deal that freed up Iranian money. These details are not only insulting and unsubstantiated by O'reilly, they are, like so much of this book, absolutely irrelevant to the subject.

Just as it is with the book, I find neither premise worthy of consideration.

I will furnish you with a suggested list of alternate, preferable reading pertaining to the life of the great Ronald Reagan.

The Wit and Wisdom of Ronald Reagan 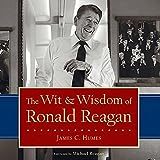 I Recommend the Audio Version

I have personally listened to the audio version of "The Wit and Wisdom of Ronald Reagan" many times and recommend it because it is composed of actual audio footage of the president telling jokes. I belly laughed all the way through and I bet you will too! No one could tell a joke like President Reagan. You will find yourself swept away in pleasant, dreamy nostalgia as Reagan's soft and playful voice shares dozens of jokes, aphorisms, true stories and anecdotes.