It can be surprising I think, how much the books which are written by the same author can still vary among themselves, can give such a markedly different taste, can provide a different feel and sensation. Thus it is with La Couleur du Bonheur (The Color of Happiness in English), written by the Francophone Chinese writer Wei-Wei. Having read a previous book written by Wei-Wei, Fleurs de Chine, one can be struck by the heavier, less cheerful, less radiant nature of the work. Perhaps it is due to the inherent difference in plots between the two volumes, with the long and singular story of La Couleur du Bonheur, as compared to the individual novella construction which characterizes Fleurs de Chine, linked together by the the tenuous but beautiful connections which the author wove between them.

The structure of La Couleur du Bonheur is a grandmother recounting to her granddaughter the story of her life, alongside with a second track recounting the family life from 1957 onward, focusing on the granddaughter herself with the narrator serving as her voice. Along the voyage, stretching from the 1920s to the 1980s, some of the recurrent themes of Wei-Wei's work comes to play: the interest in Chinese traditions, stressed with poems and traditional stories, the political events which shook the country, the difficulties of being a woman in China, love and its power, and perhaps a thread of hope and optimism which runs throughout, that at the end things improve and get better, that the woe and cruelty of the 20th century must in the end start to improve and arrive at some sense of improvement.

To me, it lacks some of the panache and the beauty of the descriptions and the scenes which characterize Fleurs de Chine. There is less which came back to me like the scenes of the Long March, with the shining river valleys flanked by the brilliant magnolias under a blazing sun, and less of the humor and the comedy which could sometimes infuse this other book - there is no equivalent for example, of the troops on the Long March being accosted by the indigenous peoples of the wild areas of China through which they traversed and their clothes being stolen! Instead the focus is on more quiet, more domestic, more familial narratives: simple, recurring scenes, mark this, such as infusions of ginger which are given to the children when they fall ill, maternal notes which themselves infuse the pages.

If the book is not the same sensation of love and great adoration that I felt for Fleurs de de Chine, it nevertheless is one which is capable of stirring and moving the heart. When one is involved, attached, riven to a book to the extent that one is transported by it with the meeting between those who had been separated for so long, by the selfless proclamation of love of a man whose crippled body imprisoned a noble and elegant soul, by the sense of wrenching loss after a young man fails his dream and chooses a different path - in this regards, the ability to craft characters who one sympathizes with is one which is very well done indeed and an enduring feature of Wei-Wei's work. But the road which this book takes is one which is, despite the title, less happy and joyful than other works of Wei-Wei, if still simple and a pleasure to read. It is indeed here that the title finds its relevance: the color of happiness is to find joy in all of life, to find joy and happiness despite its travails and woe, and in the end to find joy with red flowers posed upon a tomb. 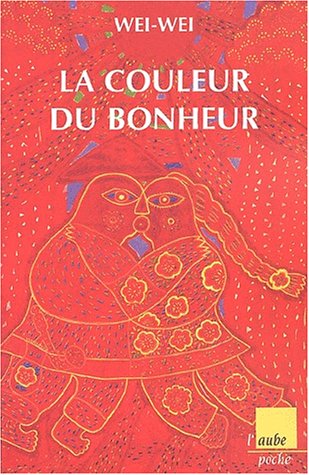