On 11 September 2001, the day started off like any other day. People were setting off for work in New York City and the sun was shining. This is the case with Chief Richard 'Pitch' Picciotto. He had not long got to his Fire Station in lower Manhattan. But, Rich and his crew of fire fighters soon realised that this was going to be no ordinary day. As they gathered round the television set, the news of the attacks on the twin towers sifted through, and it was at this point Chief Picciotto knew he had to get there and do what he could do help. Rich was the highest ranking fire fighter to go inside the North Tower after the plane had struck.

The book begins with The Fireman's Prayer, followed by a list of 343 fire fighters that lost their lives on this fateful day. As Pitch begins the book he tells us about how his day began with his wife and 2 children and making his usual journey to work, as he does every day. Pitch tells us that he was also involved with the World Trade Centre bombing attacks in 1993. When they arrive at the twin towers, he goes into the north tower. Throughout the book he goes into great detail about his time in the north tower and the work he and his men did to rescue all they could. As he climbs the stairs and checks all the rooms on each floor, it is without a doubt amazing to think that these brave men put their own lives at risk to save others.

Whilst he's on the 35th floor, he explains how he hears the south tower collapsing. He can't visually see it collapsing, but the deafening noise of the collapse can be heard and he explains in great detail how he can feel the shudders and the noise. The most upsetting part of the book for me really was when he was explaining how he could hear the thuds on the ground every now and again of people jumping to their deaths. That must have been terrible for everyone who was there. You just can't imagine what it must have been like, can you?

Throughout the book he goes into great detail about how he led his men and civilians that were trapped in the north tower to safety. Remarkably, Pitch tells us how, whilst he is on the stairwell between the 6th and 7th floor, the north tower collapses. As he and some of the other fire fighters are making their way down, he describes how the deafening sound of the towers collapses. At this point he says a prayer for his family, almost certain this would be it. But Pitch miraculously survived the collapse, as did other crew and civilians. From this point he tells us how they try to dig their way out, but unsuccessfully. It is intriguing and amazing to think that there were people who survived this. As they waited for what seemed a lifetime to get rescued, he describes in great detail how they can do nothing but just wait. There is the risk of further collapse. There is the danger of the twisted steel, the heat and gas from the plane alone could cause any number of complications. With his radio, he manages to get in contact with another fire fighter on the outside. It is remarkable to think that there would be anyone survive this after the collapse, but by reading this account of the book, we are witnessed to the strong determination of the brave people that were involved in the rescue operation.

This book is written together with Daniel Paisner. Richard Picciotto recalls his day at the twin towers and the rescue mission that him and his men took part in. Reading this book from someone who took part in this horrific event will open your eyes. At times it made me cry and made the hairs on the back on my neck stand up on end. There are parts in the book where Pitch talks about his frustrations with cutbacks within the fire service and making things more difficult. You can understand why he feels like this, certainly, at a time like this.

This is a compelling book to read. To see what happened from inside the north tower has made me think again about the brave people that went inside to save people. Pitch was one of a few people to survive the collapse, and lived to tell the tale. It's a book which I couldn't put down and my hat goes off to the brave people that went inside to help. It certainly made me look at the events from a different perspective. I clearly remember watching this on television in 2001, but this book has made me see things from a different perspective. 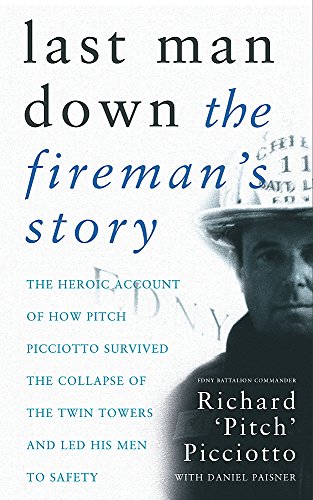 Last Man Down : The Fireman's Story - The Heroic Account of How Pitch Picciotto Survived the Collapse of the Twin Towers and Lead His Men to Safety
Buy Now