Life and Death in 'Time Flies" by David Ives 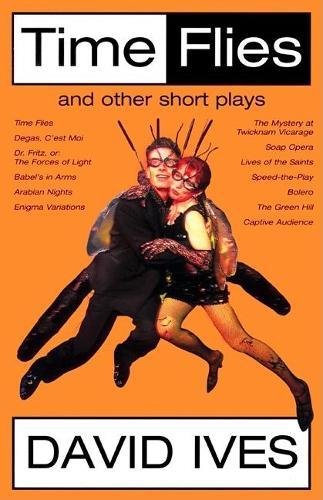 David Ives’s one act play, “Time Flies,” is a piece with a recurring theme: carpe diem (a Latin term meaning “seize the day”). The play admonishes the audience to live life to the fullest because life is short and will come to an end much sooner than expected. Ives uses mayflies (which only live for about 24 hours) as the main characters to emphasize how short life is.

The play begins with two mayflies who have recently met at a party. The male, Horace, has just flown the female, May, home from the party and they start getting to know one another. They discover that they have a lot in common: both of their parents are dead, both got their wings about six hours ago, and both were born around 7:30 that morning . After getting to know one another the two begin to relax and watch television, however, the show that they begin watching turns the mayflies’ world upside down. David Attenborough, on Swamp Life, reveals that mayflies only live for a day, long enough to mate, have babies, and then die. The realization that they will be dead by dawn sends the mayflies into a panic and time begins to speed up. When they finally accept that their lives will be short, time slows to a normal pace again and the mayflies decide to make the most out of the time that have left by flying to Paris for the night.

What is a mayfly anyway?

Mayfly is the common name for the genus Ephemeroptera, which comes from the Greek ephemero-, which means “short-lived,” and –ptera, which means “wings”. These insects live for up to four years underwater in the nymph phase until they rise to the surface and molt, becoming adults. Once they reach the adult phase, however, they have less than 24 hours left to live. By using mayflies as the main characters, whose lives are measured in hours rather than years, Ives emphasizes the briefness of life and the importance of living life to the fullest.

Like humans, childhood is long and carefree for the May and Horace, but the realization hits them in adulthood that they have very little time left. By the time people become adults and meet someone they want to spend the rest of their lives with, there is very little time left to enjoy it. Each “Cuckoo!” brings them closer and closer to inevitable demise, much like “Happy Birthday” for a human. David Attenborough’s revelation to the mayflies is a metaphor for the events in a person’s life which make them aware of how little time they have left in the world.

When people realize how short life is, they often begin to worry about death excessively and forget to live. An entire lifetime can be wasted worrying about death. This is addressed by the admonition “carpe diem,” a phrase that is repeated four times in the play. “Carpe diem” is a term often used in literature and poetry to mean, “life is short, so live it while you can.” In this play, however, it seems somewhat ironic, as the mayflies will only live for one day.

Whether it is the life of a human or a mayfly, life is short. This is inevitable, so people should enjoy it while it lasts. Perhaps humans should be more like mayflies: enjoy childhood, find someone to love, and “carpe diem.”