How my spiritual writing journey started

It was October 2004 when I got the first insights and visions that empowered and inspired me to the point of starting writing my first fantasy novel.

This was the motivation to begin a spiritual journey on paper.

My novel was written on my mother tongue, Greek language.

The following excerpt is the first one that's translated and published on net into English.

The book was published on 2007 by a small Greek publishing house and re-published (self-published) on 2011 and 2017 on Amazon.

The e-book editing, cover artwork and publication was made by the author herself.

The Life Journey That Carries Hopes (Greek Edition)
A journey into Light for the ongoing spiritual battle of heroine Jasmine and a group of people who journeying on the boat of Faith, Hope and Supreme Ideals ascend into the Awakening and Enlightement.
Buy Now

Jasmine the heroine of this novel is guided by Forces of Light to escort a group of people- through great obstacles and obscure paths- to Awakening and Enlightenment after a devastating war.

Love,Compassion,Knowledge,Hope and Faith are primordial virtues along this path.

Salamis Island : where inspired to write the novel 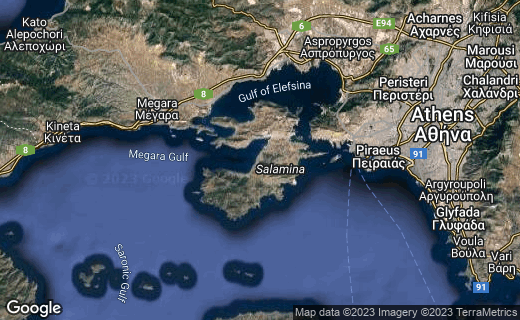 Excerpt from the novel: "A Life Journey that carries hopes" (English text)

Original title of the novel in Greek language :

Her mind journeys to imaginary seashore accomplished by golden sand, a deep blue sky hovering over her head, and a moon ... that was not the familiar moon everybody knew.

Located along the seashore a couple was playing casually and playfully, airy clothes waving as if touched by a gentle breeze.

A woman and a man both beloved and harmonious!

The voice called again and again...

She stretches her hand and gives her a bizarre, but beautiful shell.

She holds the shell in her hands and stars at it apparently enchanted.

A voice whispers sweetly – sweetly in her ear:

She raised her head and felt becoming one with the blue sky, where golden pigeons were flitting lightly alike little fluffy clouds.

She crawls within one big steep and narrow tunnel.

She proceeds with arms and legs, her knees click on gravels.

The place is claustrophobic and there is no escape anywhere, only in the depth of the tunnel a timid light shines.

She watches herself from above and finds that she’s not alone!

Behind her many women and men follow, a multitude of people unknown to her.

The anode is tedious and painful, but she insists on moving.

Finally she laboures up to the end of the tunnel where the light shines...

But the aperture is desperately too small, so small that only her hand might get through.

From the outside another hand is digging the soil.

"Come pass out!" the voice of an unknown man urges.

"It's impossible, the passage is narrow!" She replies.

Suddenly, she feels being urged and her half body goes through this aperture till her waist.

From this state she feels being squeezed, unable to breathe, to inhale...

She forces and pushes herself to go...

She pushes and then gets out as a baby coming to light!

Collected Ancient Greek Novels
Prose fiction, although not always associated with classical antiquity, did in fact flourish in the early Roman Empire, not only in realistic Latin novels but also and indeed principally in the Greek ideal romance of love and adventure to which they are related. Popular in the Renaissance, these stories have been less familiar in later centuries. Translations of the Greek stories were not readily available in English before B.P. Reardon’s excellent volume. Nine complete stories are included here as well as ten others, encompassing the whole range of classical themes: ideal romance, travel adventure, historical fiction, and comic parody. A new foreword by J.R. Morgan examines the enormous impact this groundbreaking collection has had on our understanding of classical thought and our concept of the novel.
Buy Now

Her foot stand on a solid white land, and she faces a sandy seashore in front of her.

Groups of people arrive and expand along the white seashore.

A breeze blows and brings to her mind secret images.

She is deeply fascinated by the scene that watches ...

The sand changes colors and portrayal, as a creative inspiration of a cosmic artist who combines the colors and hues of the landscape.

Her eyes are filled with the poetry of the alternative reality.

Her enchanted mind listens to a same motif.

In the morning she woke up in her bedroom having a strange sensation as if he had really made this amazing trip .

Beyond that though she felt having learned something that could not even remember what it eventually was, but it was certainly a message.

Later the same day she decided to leave ...

The Stone Years and Forgiveness by Katerina Kostaki

The choice was not accidental.

She looked into the dark closets of knowledge and remembered that there was an area that gave birth to and nurtured the demigod who she called Neleus in her dream.

That would be the destination!

A few possessions, a few personal belongings, and the decision had been taken.

The great escape from the city that have been hosted her for the last years took shape!

She crossed with her two children the Big Island, which connects through a strait with the capital and walked through forests and mountains, until they reached the river, flowing into the sea.

The great river had the name of the hero.

The son of Poseidon!

A birth that came from the mate of a god and a mortal woman.

Not plain at all!

So it was, when the gods love, mate as humans with humans!

From such a union two children were born, both boys.

Their mother placed them in a small boat, and dropped it into the sea.

The sea loved and saved them, children of Neptune were anyway!

The river itself is connected with the sea, fresh water with salt, the land and the sea...

"The sea herself guided us like legendary heroes into this new place ..".

It couldn't be differently.

Children of the Gods aren't we, our race? Have similar origin and similar history! Could not abandoned us, prey and exposed, like the two babies? "

A deep inner voice spoke in an authoritative tone within.

"There you should go!"

She couldn't see, but she could feel it...

They had to go, leaving behind the shackles that united them with the sterile past.

She envisioned the seashore, at that point where the river flowed into the sea.

It did not resemble to a dream.

It was the white seashore she saw in her sleep!