"Lost in Caucasia": An Essay on the Novel Caucasia by Danzy Senna

Why am I posting this?

This is an essay I wrote for a Women's Studies course I took in University. When writing an essay or an assignment for school the hardest part for me was figuring out where to start. I believe that getting a few ideas by seeing examples and reading other peoples essay's always helped me figure out how I would write my own essay and how to get started. That is why I decided to share my essay with all of you. Hope this helps!

Caucasia: A Novel by Danzy Senna

Caucasia by Danzy Senna is a narrative of a young bi-racial girl’s journey of coming to race consciousness as she is forced to leave her home in the south end of Boston (a “racially” mixed area), and disappear into “Caucasia” (the white nation). One of the main themes in the novel is the issue of “race”. Senna explores the contradictions between a visible racial identity and a subjective identity, and as a consequence destabilizes the idea of “race”. The novel Caucasia illustrates the intersectional social constructions of whiteness through Birdie’s struggles with identity, her standpoint, and the structures of difference and race seen through her eyes.

Caucasia examines the relationship of identity with the self (body and mind) and how others perceive us in our bodies. Senna shows the reader how identities of gender, race and nationality are intersectionally and socially constructed. In the beginning of the novel Birdie has no name, her identity is shaped and formed by how others see her. The confusion Birdie feels with her identity is not only due to the discord she feels between her body image and her physical body which most adolescent girls deal with, but she also feels confusion regarding the mixed messages she receives from the “white” and “black” communities because of her white skin. The characters of Birdie and Cole are both bi-racial, however others (including their own parents) see Birdie as “white” and Cole as “black”. During Birdie’s childhood and her time at Nkrumah, Birdie was raised to have a strong “black” identity. This identity was problematized by her white skin and facial features. At times Birdie felt as if she was valued less then Cole for not fitting the “black” image: “Others before had made me see the differences between my sister and myself—the texture of our hair, the tints of our skin, the shapes of our features. But Carmen was the one to make me feel that those things somehow mattered. To make me feel that the differences were deeper than skin” (Senna, 1999, p.91). Birdie begins her identity quest by attempting to disappear, to become invisible. Birdie recalls a story told to her by Cole about Elemeno. That Elemeno is not only a language, but also a people and a place of safety and inclusion. Cole explained to Birdie that people in Elemeno constantly shift shape and colour in a quest for invisibility in order to survive as a species. The power of the Elemeno people lays in their ability to disappear into any surroundings. In response to Cole’s story, Birdie asks “What was the point of surviving if you had to disappear?” (Senna, p.7-8). Ironically the story of the Elemeno’s would foreshadow Birdie’s own disappearance into “Caucasia” for her own survival. The need for Birdie to “disappear” or become “invisible” in order to survive in “Caucasia” echoes the writings of bell hooks (1992). In speaking of the power and terror of the white gaze historically in the U.S., hooks explains that there is safety in the “pretense of invisibility” (hooks, p.340) and how black people have learned to “wear the mask” (hooks, p.341) in an effort to become and remain in that safe haven of invisibility from the terrorizing white gaze. Birdie appears to have been wearing “the mask” since her time in Nkrumah. The hostility of the other children toward Birdie in particular, at the all “black” school forces Birdie to “wear the mask” and put on a racial performance for her schoolmates in Nkrumah and she even begins to learn to speak in slang to better fit in. The character of Birdie resembles that of a chameleon, constantly taking on the colour of those around her in an attempt to become invisible. This racial performance shifts through Birdie’s journey as she attempts to fit in with the “white” teenagers in New Hampshire. Birdie begins to act, talk, and dress like the New Hampshire teens and as a consequence begins to disappear into “Caucasia” (the white nation) and her falsified identity of Jesse Goldman. As hooks points out, for white people there is an assumption and fantasy of safety (hooks, p.340). This can be seen in Sandy Lee’s assumption that she can easily disappear into whiteness, which she takes for granted. Despite Sandy’s rejection of her history of white privilege, she always has the safety in knowing that she has the option of disappearing into the safety of whiteness. For Birdie disappearing into whiteness does not denote “safety”, it signifies losing herself and her true identity. Birdie must contain and compromise her own true identity in order to have this “pretense of invisibility”. Eventually, Birdie’s loss of her true identity drives her to flee New Hampshire and remove her “mask”. “I wondered… if I too would forever be fleeing in the dark, abandoning parts of myself that I no longer wanted, in search of some part that had escaped me. Killing one girl in order to let the other one free” (Senna, p.289). Birdie’s disappearances throughout her journey were identity forming processes and important for her search for her sense of self and her identity. Birdies identity quest began by attempting to disappear and become invisible, however, her quest comes full circle as she again finds herself at the end of the novel. Throughout the novel Birdie also struggles with her sexual identity. Senna challenges the categorization of identities through the character of Birdie and suggests that identity is fluid. Birdie does not fit into the rigid categories of “white” or “black” or gay or straight, she is in-between.

Senna also examines whiteness and its social construction from the character Birdie’s standpoint in the novel. Standpoint refers to the location or place within the relationship of domination and subordination, that affects what people see or do not see. Ruth Frankenberg (1993) argues that there is a direct relationship between experience and standpoint. She argues that those who are the oppressed in the systems of domination are more likely to see the structure of domination because they experience it (Frankenberg, p.5). In Caucasia, Birdie can see whiteness in ways others can not due to the fact that Birdie sits on the boundary of whiteness. In fact, for this same reason Birdie can see blackness in ways that others can not. To the “black” community Birdie is seen as “white”, but in comparison to the “white” community she feels like she is “black”. She looks on at each end of the spectrum to the structures of whiteness and blackness from in-between both. She becomes aware of the white gaze and the power of the white gaze in ways that others can not. Birdie becomes aware of the power of the white gaze very early on as she experiences the terror it puts in her father when he is questioned by the police and accused for kidnapping “a little white girl” (Senna, p.60-61).

Structures of Difference and Race

The setting of the novel Caucasia plays an important role in its examination of the social construction of whiteness. The novel is set during the 1970’s in the racially tense city of Boston in the mix of the civil rights movement in America. Caucasia made it apparent that the nation was very fractured and built on processes of exclusion (and inclusion) and othering. The history of America as a nation has been built through the violent creation of difference, and as a consequence the violence and wedge of difference continues into the time of this novel. Sandy Lee refers to the nation as “This war they call America” (Senna, p.331), illustrating the fractured nationalism that exists within the nation. These inequalities that structure differences are relational (relationship between privileged and oppressed). Frankenberg argues that “whiteness” is a racialized identity that is constructed in relation to the racialized “other” (Frankenberg, p.13). The foundation of white supremacy is based on the belief that whiteness is a pure category and a dominant “race” and as such, it must be protected and kept intact. This essentialist view of racism (seeing race as different) is seen in Caucasia in many instances through the reactions to Birdie and Cole from others and how others see them. We can see this in particular through the characters of Carmen and Grandma Logan. The differential treatment of the two sisters by both these characters shows the hidden prejudices that exist within people shaped by the structures of difference and race. In regards to Grandma Logan, Birdie recalls “she believed that the face was a mirror of the soul. She believed, deep down, that the race my face reflected made me superior. Such a simple, comforting myth to live by” (Senna, p.366). Grandma Logan also represents the generational history of whiteness which has placed her in a position of privilege. In hooks examination of whiteness, she explains that white people can safely imagine that they are invisible to black people (hooks, p.340). This is in part due to the normalization of whiteness by “white” people in which they view whiteness as “non-racial” or racially neutral. In Caucasia, Senna constructs whiteness as being the object of critical scrutiny through her character of Birdie. At the beginning of the novel, Birdie describes most people she see’s as having caramel or cinnamon skin without ever identifying them by “race”. On the other hand, Birdie clearly identifies “white” people by “race” with no mention of skin tone. Thus, it becomes evident to the reader that there is a reversal from the usual format in society in which whiteness is seen as the “norm”. In Birdie’s world it is “black” people who are the “norm” and “white” people who are the exception.

Through Birdie’s journey in Caucasia, the author illustrates the intersectional social constructions of whiteness and rejects the rigid categories of identity that have been socially constructed. Senna also examines the relationships of power and subordination of whiteness and blackness, through the eyes of Birdie who stands in-between the boundaries of these constructed categories. Finally, through Birdie’s journey of race cognizance we see the structures of difference and how they affect lives. Birdie’s journey illustrates that the citizens of America all live in very different “America’s” according to their racialized, gendered, and sexualized experiences and how these categories intersect to create greater “difference” and further fracture the nation. 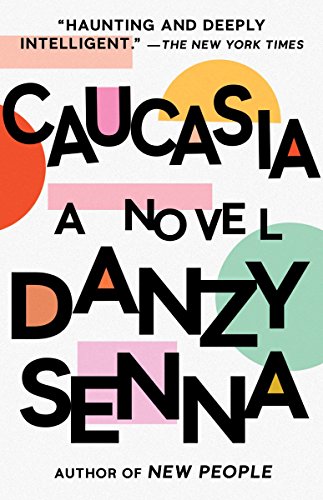