What Can We Learn About Humanity from Shakespeare's Macbeth?

William Shakespeare wrote Macbeth in 1606, a dramatic play about Scotland in the eleventh century. Its theme is the damage that can be done by someone overcome with excessive ambition. Bloodshed, scheming, murder and magic are prevalent, making this a gruesome and gripping spectacle.

The ominous opening scene includes thunder, gloom and three scheming witches. Then the focus shifts to the king of Scotland, Duncan, who is fighting a bloody battle against the Norwegians. He hears that two of his generals, Banquo and Macbeth have been fighting courageously and that Macdonwald of Ireland - thane of Cawdor - has been arrested. King Duncan is very proud of Macbeth and decides that he will make Macbeth the new thane of Cawdor. And interestingly, the very trait Macbeth found so despicable in Macdonwald is seemingly passed on to Macbeth. Sometimes this can be seen in personal relationships where one person condemns the behavior of another, but it turns out they are alike in many ways.

How Macbeth Goes From Hero to Villian in an Instant

Banquo and Macbeth have not actually heard the news of Macbeth's appointment, and are on their way home after the battle when they encounter the witches from the opening scene. The witches begin to foretell the future, telling Macbeth he will be made the thane of Cawdor and will eventually become the King of Scotland. Then they tell Banquo that his sons will become kings but he will not be a king. They vanish before the two men can ask them any questions, leaving the men wondering how true the words could be. They decide that they do not really trust these ugly witches.

Just after the witches disappear, a nobleman, Ross, and his friend Angus find Macbeth and Banquo and give Macbeth the news that he has been appointed thane of Cawdor by King Duncan. This is surprising, and Macbeth is delighted, but he also begins to think back on the words of the witches. He figures since he is to become king, and since there is already a king, maybe he should consider murdering the king in order to take the throne. Why wait right? It is interesting to note how quickly Macbeth goes from being a noble hero to thinking like a traitor when success is in view. Shakespeare certainly had a keen understanding of human nature.

What is the Turning Point in Macbeth?

Macbeth and Banquo head back, and when they meet with King Duncan, Macbeth acts like they are best friends. He thanks Duncan for making him thane of Cawdor, then Duncan then states that he will be appointing his son, Malcom to be the prince of Cumberland. This news causes Macbeth’s ambitious internal struggle to turn deadly. In his mind, he makes his decision to kill Duncan. He figures this may just be the best way to ensure that the witches’ prophesy is fulfilled. After some conversation, everyone agrees to go to dinner at Macbeth’s castle that evening. From this point on it is like there is no going back, and even Macbeth's wife gets in on the scheme.

Apparently while they were on their way back, Macbeth sent a letter off to his wife about what the witches had prophesied. She is as ambitious as Macbeth, so she has already started planning ways to skip the formalities and get her husband onto that throne. She is probably dreaming of a life of ease, with servants to attend to her every whim.

While Macbeth has been pondering and wavering about his decision to kill King Duncan, Lady Macbeth hasn't even hesitated. When she learns that the king and the others will be coming over for dinner, she sees it as the perfect opportunity for her husband to rise to power. It is interesting that this female character seems even more ambitious and immoral than her husband. The feeling at this point is that things have been turned upside down and no one can be trusted, not even the women, who ought to be more righteous.

It is also sad that this trusting king feels he has freed himself of a traitor, yet he has actually appointed someone even more treacherous to a position of power. It serves to remind us that when just when those in charge think they can relax, something terrible is actually happening behind the scenes.

The Murder of King Duncan in Macbeth

Macbeth, spurred on by his wife, continues to plan Duncan's murder. But his conscience troubles him and he has a vision of a bloody dagger, which shakes him up a little. He and Lady Macbeth talk about it after dinner, and she convinces him to follow through with their plan. She calls him a coward for his reluctance, and apparently that is what puts him over the edge. She is obviously very shrewd, knowing that the quickest way to motivate someone is to challenge their ego.

Later, Macbeth kills Duncan, and he and his wife make it look like Duncan's drunken bodyguards are guilty by planting evidence on them. At this point, Macbeth is actually horrified at what he has done. But not Lady Macbeth! She simply states that all they need is a little water to wash away their guilt. This leaves the audience wondering which of them is worse, and what kind of treachery they will get into next.

Who Will Save Scotland from Macbeth?

Just as Macbeth and his wife are finishing up, the nobleman Macduff arrives at the castle and is shocked to see Duncan’s dead body. Macbeth springs into action and in an attempt to look righteous, he kills the two guards in an angry rage. This reminds me of the scene in Hamlet where it is said that Queen Gertrude "doth protest too much". Macbeth's furious "avenging" of the death of Duncan in front of Macduff is obviously a ploy to get Macduff to blame the guards. This is so common to human nature - people of all ages get into trouble, then try to make it look like it is someone else's fault.

The king’s sons, Malcom and Donalbain find out about their father's death and are afraid that they will be next, so they run to England and Ireland to hide. Macbeth successfully takes the throne and has a grand ceremony. But Macduff, who is probably suspicious, is not the least bit interested in seeing Macbeth become king, so he doesn't go to the coronation. This doesn't go over well with Macbeth.

It seems at this point Macbeth should be content with the throne, but instead he starts thinking about the witches prophecy regarding Banquo - his buddy from the war. This is interesting because the prophecy didn't say Banquo would become a king, it only said his sons would. It's like Macbeth has gotten away with murder and yet that is not enough. He's turned into a bloodthirsty monster, and now there are no limits to what he will do. He sends a couple of guys to murder Banquo and his son, Fleance but the men only manage to kill Banquo. Fleance escapes and when Macbeth finds out, he is in turmoil.

In spite of how out of control it seems Macbeth has gotten, it also appears he is still trying to choke back his conscience. At a banquet one night, he sees Banquo's ghost and shouts in terror, making the other Scottish noblemen think that he is losing his mind. He wants to get a grip on himself, so in a last ditch effort, he decides to go see the witches. Seems legit, to solve a problem, go back to the source - but in this case you would think he'd know better. What he is likely experiencing is confirmation bias. He's convinced himself that somehow everything will work out in his favor, heck, he deserves that. He just wants to hear from someone else that he is right.

The witches are pretty conniving though and before they even see him, they are conspiring about how they can cause him to fail. When he gets there, they conjure up three ghosts who tell Macbeth prophecies that seem to be impossible. The first says that he should be wary of Macduff, the second is no one can kill him unless they are not “born of woman”, and third, he hears that only when the woods of Birnam move to Dunsinane hill can he be defeated. Because he went into the meeting with the witches intent on continuing on his chosen path, and in spite of the fact that the witches prophesies were 'true' once before, Macbeth leaves feeling invincible. He figures Macduff isn't much of a threat, everyone is born of a woman and forests cannot move. These witches seem to know him too well.

Macbeth feels pretty full of himself, but just to be on the safe side, he sends men to kill Macduff. Macduff has already got Macbeth figured out, so he has fled to England already. Because Macbeth has totally lost it, he just has Macduff’s family murdered. While in England, Macduff meets with the late King Duncan’s son, Malcom. Malcom isn't too sure he can trust anyone, so he tricks Macduff into demonstrating his loyalty to Scotland. Once Macduff has proven himself, the two men agree to gather together an army to defeat Macbeth and rescue Scotland.

Is there Hope after Macbeth's Reign of Terror?

In the final act, Macbeth is happily sprucing up the castle in preparation for his victory over Macduff, while Lady Macbeth is being attended to by a doctor for sleepwalking. She seems to have crumbled, and is now miserable and sleepless because of her part in the murder of King Duncan. She shouts insanely about blood being on her hands and in the end, she kills herself. Macbeth has a moment of clarity, then starts to think that life has no meaning, "Life's but a walking shadow" he moans. But he quickly rallies and makes up his mind he will not go down without a fight.

Malcom, Macduff, and their army march on the castle, and what do they drag along with them but logs from the Birnam forest. This fulfills one of one of the witches prophesies, but Macbeth is not about to give up because he doesn't see how someone can not be born of a woman. He fights viciously and when Macduff finds him and they engage in combat, Macbeth tells Macduff there's no way he can kill him because of the prophecy. Then Macduff tells him that he was not born but was cut from his mother’s womb! Macduff kills Macbeth, cuts off his head, then appoints Malcom, son of Duncan and rightful heir to the throne, as king.

By the end of the story, Macbeth has become so disgusting that it is easy to feel relief when we see him brought to justice. It is also interesting to point out that usually when people think their illicit plans are foolproof, they are sadly mistaken.

The play ends with a feeling of hope that order has been restored and Scotland will recover from the terrible reign of Macbeth. 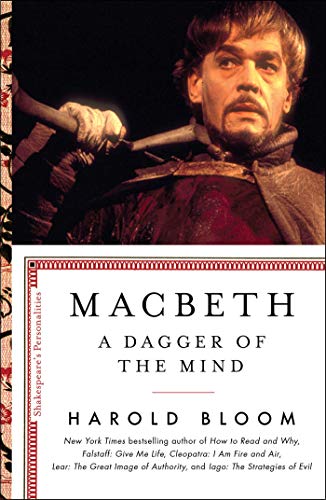 Macbeth: A Dagger of the Mind (5) (Shakespeare's Personalities)
Everyone who loves Shakespeare's Macbeth should have a copy of this book! It is chock full of insight into the richness of this story on so many levels! Shakespeare may have lived in obscurity but it is often the most overlooked people who have the best insights into human nature.
Buy Now