Medea by Euripides: A Unique Treatment

The myths of Ancient Greece abound with varying tales concerning Medea which both vilify and victimise her, yet two constants follow her mythology. She is credited with helping Jason retrieve the Golden Fleece, and she is always portrayed as a magician or a witch. Euripides delves into her psyche differently than his contemporaries and builds a complex character. He bases his play upon Jason returning to Iolcus with the Fleece to gain his hereditary throne. Again Medea used her magic to help him. Yet her machinations would have them exiled to Corinth where Jason, attempting to separate himself from Medea’s reputation, marries Glauce the daughter of the Corinthian king. Using her talent for magic and witchcraft Medea exacts revenge by killing the king and his daughter with a poisoned robe. Her vengeance upon Jason would include the killing of her own children.

With her dual sides of good/evil, heroine/victim, and lover/murderer, Medea encompasses a wide range of the human psyche. Whether or not Euripides was successful in relating a good story is debatable in scholarly circles, but his recognition and portrayal of the complexity of human nature cannot be denied. He poses questions through plot and character which still defy clear answers today. Euripides is unique among his contemporaries. He chooses female characters over male. The weak and the oppressed also find favour as popular subjects, and he tries to centre his dramas around their points of view, unlike most of his peers who relate the exploits of heroes and gods. Even Sophocles is reported to have commented that while he ”showed man as they ought to be…Euripides showed them as they actually were” (Grene v). 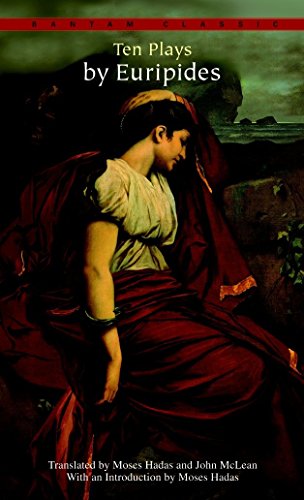 From the outset of the play the audience knows through Medea’s nurse that Medea will strike back at Jason’s injustice. While Medea bemoans her predicament and wishes herself dead in line 97, typical human irrationality brought about by emotional trauma twists her to curse Jason, and her children by him, only fourteen lines later. As the story advances we are left with a complex  Medea who progresses through many stages of grief and anger culminating in her careful plotting and killing of Jason’s new bride, his father-in-law and her own children. She is careful to leave Jason alive so he will have to cope with the resultant grief and loss – revenge taken to the next step. This basic plot differs somewhat from older versions of the myth.

From the archaic period of myth we find a different Medea; one who did not kill her own children. Euripides’ inclusion of this in his version is said to be because he was “bribed with fifteen talents of silver to absolve them [the Corinthians] of guilt” (Graves 255). In one of the myths the Corinthians are responsible for her children’s deaths. But perhaps it also made for a more dramatic end to his story, and the added infanticide exacerbated the complexity and otherness or foreign qualities of his main character.

In Christine Sourvinou-Inwood’s essay Medea at a Shifting Distance we discover three basic schemas of Medea’s personality, and how she may have been perceived by the Athenian public who first viewed Euripides’s play. Medea is initially represented as a bad woman in the nurse’s monologue not just because she is a foreigner, but because “she persuaded Peilas’ daughters to kill their father” (Clauss 256). Yet, right after this she is cast in a more favourable light, particularly with the Athenian male audience, in her agreeable nature toward Jason. A woman who did not disagree with her husband “is the chief salvation of the house” (Clauss 256). In the early parts of the play Medea’s character bounces back and forth between average, good, and bad (Clauss 257). Her final persona switches to the divine. This shifting back and forth explores the “great disadvantages of the position of women” (Clauss 161) in Athenian society, and hints that women placed in such situations may “have a point … if men break oaths and abuse their power over women, it will be their own fault when catastrophe follows, and the gods will not necessarily favour their cause” (Clauss 261). In a roundabout way Euripides supports the cause of women and their non-citizen status within society.  The switching of schema to schema also demonstrates the changing nature of humanity.

Medea’s reputation and character is well known by her nurse who appears to be the voice of wisdom and reason in the play. When speaking to Medea early in the dialogue, she urges moderation; “What is moderate sounds best” (line 126). Yet this voice of reason does not remain, and by line two hundred the nurse leaves, never to return. By taking  away the wisdom and reason Euripides prepares the way for reckless behaviour. The Chorus picks up where the Nurse leaves, yet unlike the Nurse they do not know Medea as well and are unable to intervene. Here again, Euripides advances the reality quality of the play – where no party is able or available to stop the tragedy. Like life, there are often no fortuitous interventions, and often no happy endings.

Medea’s ability and use of magic is well known by all. Her history is rife with its use on many occasions. In The Medea, however Euripides tones down the use of magic, yet has Medea employ it in the clothes given to Glauce to kill her and her father. Euripides seems only to use magic to advance the story or his philosophy. Because of Medea’s reputed  rejuvenation talents, one can’t help but wonder if the playwright didn’t intend her to use it to bring back her children. He explains that her reason for taking their bodies with her was so she could bury them “so that no enemy may evilly treat them” (line 1380). If Euripides did indeed take a fifteen talent bribe to write Medea as a murderer, perhaps he left the ending open enough for some to think she had the intention from the beginning, of rejuvenating her children, thereby absolving her in some way of murderous intent (Cahill 216-17).

It is through this ending where one also is confronted with the divine. Medea appears in her grandfather Helius’s dragon-drawn chariot which she maintains was “Given me to defend me from my enemies” (line 1322). This would suggest that her actions are approved by at least one god. The entire scene places her in a lofty position above Jason. She has won in a way, but how? As a justified avenger, or someone who has slipped through the cracks of justice because of unnatural ability and connections?

Throughout the play Euripides confronts his audience through the character of Medea. In portraying her as good, bad, normal, foreign, and semi-divine he forces “his audience to re-examine their presumptions about what the ‘norm’ really is by “challenging established categories” (Clauss 9). Through Medea’s erratic behaviour the audience is also compelled to consider “otherness lurking within self – the possibility that the normal carry within themselves the potential for abnormal behaviour, that the boundaries expected to keep our world safe are not impermeable” (Clauss 9). Medea is an amalgamation of humanity which is constantly in the throes of change, where the nature of man is hidden from himself.