Sometimes fashion trends happen by meticulous design and sometimes by chance. Economics and social standing usually have something to do with it. If you have a boundless budget and unlimited access to the choicest goods then you're influenced by the former but if you're a struggling clothes fan with more imagination than resources the latter. In a wondorous twist of tradition some of those compiliations thrown together by these thrifty innovators have been inspiration for our most talented style makers. Today, these modern bohemians don't have to be artists, writers, or actors they can also be librarians, teachers and secretaries. Offbeat, a little wacky and throughly madcap they shamelessly flaunt their thrift store finds, hand-me-downs and d.i.y. ensembles with pride in the face of conformity.

To completely visualize how this contemporary trend rebel evolved you need to understand their history. George Bryan 'Beau' Brummell (1778-1840), father of Dandyism, originated bohemianism in the 1810s. From a lowly position as the "son of an equerry to the English court" he became a star of London society through his sparkling personality, meticulous etiquette and talent in the "dressing room arts". Known as a dandy, this sartorial phenomenon morphed into the bohemian during the 1840s and 1850s. Eschewing materialism they exhibited artistically experimental get-ups instead. Their inspiration? Poverty, rebellion, danger and art.

Bohemian enclaves in Montparnasse, Paris, Greenwich Village, New York, England and Berlin became concentrated areas of their free-wheeling decadence. They included England's Bloomesbury Group, Russian Constructivists and Italian Futurists. Their garb was a pleasant conglomerate of unisex separates, outrageous palettes, nudity and second-hand finery. Throughout all of their eye-popping pagentry bohemians espoused a few beliefs that changed popular silhouettes. At the top of the heap was the desire to replace corsetry and padding, common in women's clothing during the Victorian era, with loose garments like caftans.

The Aesthetes of mid 19th-century England particularly believed in turning one's back on mainstream trends and embracing clothing patterned after ancient Greek and medieval European garments. In 1882 writer Oscar Wilde brought Aestheticism to America along with the "Little Lord Fauntleroy" look popularized in the story written by Frances Hodgson Burnett. Consisting of a black velvet jacket, short pants and frilly white shirt young boys and men alike could wear it.

Bohemians also believed in wearing natural, hand-sewn attire instead of mass-produced ones and some like Raymond Duncan, poet, painter, fashion designer and "Greek dress" enthusiast even resided in a commune, raised sheep and spun his own wool.His sister, Isadora, world renowned proponet of modern dance and dress was equally passionate and often sported "Greek dress" too. In addition to these styles, bohemians also enjoyed "ethnic motifs", "Eastern-inspired" costumes and "artists' smocks".

I first became fascinated with bohemianism after reading Anais Nin's diaries and novels. Then when I saw the movie "Henry and June" I wanted to dress like Nin and the other female characters in the film. As fecund and mysterious as "Spy In The House Of Love" 1930s France never seemed as intoxicating to me as it did with those sensuous, decadent clothes playing against it. In silky skirts, floaty dresses, come hither hats, cloak and dagger coats, black kohl stick eye makeup and red lipstick the actress who played Nin and her sometime lover, June Miller, (Henry Miller's wife) looked delightfully thrashed. I knew I wanted to look like that the second I saw it. So, after seeing the movie, I started collecting the clothing that would help me become my own bohemian.

First I started with skirts. They had to be either silky, velvet-y or tweed-y with a non-contemporary slant. It didn't matter if they came from a thrift store or off-price store as long as they had that appeal. Then I looked for blouses, sweaters and coats to top off my skirts.Contrast was the ke- soft against hard- so I sought out vintage 1960s cardigans, bulky knit sweaters and faux fur coats. Finally to top it all off I gathered accessories-hats (i.e., berets and fedoras), Mary Janes, suede boots, men's oxfords, over-the-knee socks, vintage and retro jewelry, granny bags and gloves.

In recent years, the boho look has been portrayed simultaneously as "eclectic" and "wild" in high fashion publications, and it's been reinterpreted by every designer from Miuccia Prada to Marc Jacobs, which is okay because it can still be done on the cheap, and that's music to any true bohemian's ears. 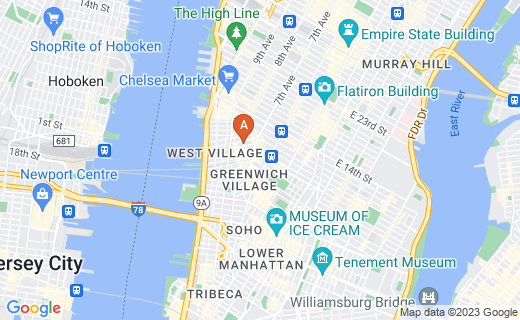 This is the location of a famous hang out for bohemians in the past.