The Thousand and One Nights is a collection of tales woven together into one larger story (or frame). The frame is that of King Shahrayar who was “driven mad by the infidelity of his wife.” After having her put to death, he decided to marry a new woman each night and murder her in the morning, thus ensuring her faithfulness. After three years there were very few remaining young women in the kingdom, which led the vizier’s daughter, Shahrazad, to come up with a plan to prevent any further deaths. The plan was simple: she would marry Shahrayar and then tell him stories every night, but never finish them before dawn. This way the king would put off her death indefinitely in order to hear the completion of the stories. It is from her stories that we get the rest of the tales that comprise the collection. By studying them we can observe a great deal about the early Arabian culture including the gender roles, patterns of behavior, interaction between the two sexes, and the punishments for violating social boundaries.

The Arabian culture was extremely patriarchal, and as such the gender roles were similar to those in other such societies. The men were the “breadwinners” and would often leave home on business that included trading, visiting, and hunting. For example, in The Story of the Merchant and the Demon , the husband left his wife and children at home while he visited another country on business. The men were expected to demonstrate their male authority and to enforce it with good management. As we see in the Tale of the Merchant and his Wife , “good management” was a polite way to say that the men beat their wives in order to enforce obedience and submission. They also beat their wives as punishment as we see in the Tale of the Husband and the Parrot , where the man beat his wife as punishment for infidelity. The women’s main role was to stay home and keep house. They were expected to be faithful, submissive and obedient. This behavior was strictly enforced.

Throughout the stories we can see several patterns of behavior for both the men and the women characters. For example, the men tended to be violent, paranoid, jealous, and quick to judge. Three of these four attributes can be seen in The Tale of the King’s Son and the She-Ghoul , where the prince demonstrated paranoia that the vizier had planned his encounter with the she-ghoul. His father reacted by quickly judging the man guilty and having him put to death without any solid proof. Throughout the tales we see violence in the form of leaders condemning people to death, for example in The Tale of King Yunan and the Sage Duban . This story also demonstrates jealousy when the vizier accuses Duban of being a foreign agent. Another example of violence is in The Tale of the Enchanted King , where the king attempts to kill his wife’s lover. Jealousy and paranoia are also seen in The Tale of the Husband and the Parrot , where the husband is specifically described as a “jealous man.” He demonstrated his paranoia when he had the parrot report on his wife’s behavior while he was gone, and again when he allowed his wife to trick him into thinking that the parrot lied. He also demonstrated quick judgment and violence when he killed the bird. This story also demonstrates the three main patterns of behavior for the women in the stories: the tendency to be deceitful, cunning, and unfaithful to their husbands. The story of the sleeping demon that Shahrayar and his brother Shahzaman encounter on their journey is a good example. The demon kept his wife locked in a “large glass chest with four steel locks.” However, he made the mistake of releasing her while he slept. During this time she managed to sleep with one hundred different men (including the brothers). This led them to proclaim, “Great is the women’s cunning.”

Which of the following was your favorite of Shahrazad's stories? 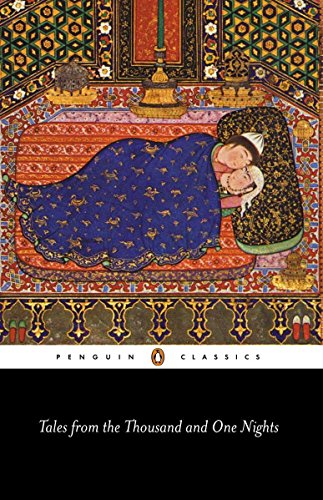 Tales from the Thousand and One Nights (Penguin Classics)
Buy Now