Nostradamus: A Poem and Commentary

From the darkest days of the medieval past

A man stared into a watery bowl

And predicted the future will not last,

For wars and famines will raise the death toll,

And nonbelievers lose their poor soul,

Even though the dire future was cast

Fools still believe despite his failed past

What is Rime Royal?

Rime Royal is a lyrical poem similar to the sonnet tradition. In English, it uses Iambic Pentameter and has nearly an identical rhyme scheme.

. However, the poem only has seven lines. Geoffrey Chaucer’s “Troilus and Criseyde”, William Shakespeare’s “The Rape of Lucrece”, and Masefield’s “Dauber” used this format.

The Rhyme scheme for Rime Royal is as follows:

Possibly, the most difficult part to master in Rime Royal – as well as in Sonnets and Ottava Rima – is the iambic pentameter. This refers to the (1) syllable count in each line, (2) and the variation of stresses placed on those syllables. Usually, a line will in these meter will have five unstressed syllable with five stressed one. In other words, one line will consist of 10 syllables.

It should be pointed out, however, that iambic pentameters haven’t been used as much as it was in the past. In fact, it's not uncommon for creative writing teachers to totally disregard this when instructing students on the finer points of writing sonnets, ottava rima, and rime royal. Possibly, the concept of stressed/unstressed sounds of syllables is not clearly understood or that the variation of accents used in the English language have changed this rules. Most likely, in a age when rules in the poetry – and English grammar – are changing, the concept of these meters have simply gotten lost.

Nostradamus has been labeled a lot of things over the years: a mystic, visionary pioneer, astrologer, prophet of doom, and the man who can see the future. However, one thing that seems to get lost in the translations of his accomplishment (both literally and metaphorically) was his literary prowess.

Much of his predictions were written in verses and rife with symbolic meanings, metaphors, and allegories. Often he organized writing in quatrain (four-line stanzas or poems) and had them in groups of 100 (centuries).

Legend has it he stared into a copper water bowl, fell into a trance, and then immediately wrote the “vision” he saw. This may explain the archaic and often muddled (some firm believes would say “mystical”) writing he produced.

There are many interpretations made by those who have studied his writings. Many ardent believers claim his writing revealed that he predicted the future and point to certain lines that seemingly match events in history that have occurred during and after Nostradamus’s life. Others claim it's complete gibberish that nearly anyone can read whatever they want into to them (Skeptic's Dictionary, 2012).

Another conclusion made by some was that he was a hack poet who managed to repackage his verses as “mysterious messages” from the future. Of course, that can’t be proven. And whether he was trying to be poet is speculative, at best.

The most interesting – and possibly the most plausible – interpretation came from Jean-Claude Pecker of the College de France in Paris. He believed that Nostradamus wrote cryptic verses as a way to

(1) criticize political and social issues of the time; and

(2) to protect his intentions in order to avoid repercussions.

Did Nostradamus Predict the Future? 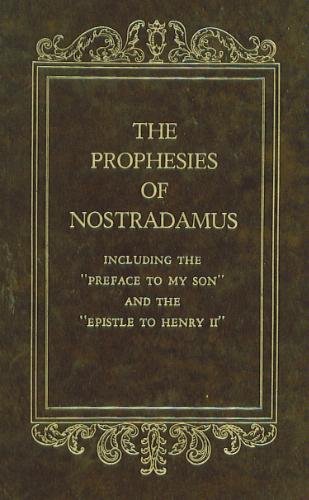 The Prophesies Of Nostradamus
Buy Now