One Night With The King: Esther Speaks

One night with the king
Was enough for us all,
One night to remember,
To make us stand tall.

The king gave away
And the king granted favour,
The king held our lives
Like an all-knowing saviour.

The girls dreamed of riches
And wished for gold things,
If the king was well-pleased,
He might even give rings.

When so many women
Compete for his eye
There was no room for error,
No time to try.

Every move must be graceful,
Every blemish erased,
No extra pounds
No lines on our face.

A night with the king
Would make everything right,
This game was for keeps
And the prize was in sight.

When the king called your name,
You had better be ready
To please him and tease him,
And make his world steady.

One night with the king
Was all that I had
How would I please him
When he seemed so sad?

One night with this man
Who ruled every nation
A tyrant, a monster
His name: devastation.

My God knew my story,
I was here out of place,
A stranger in this land
Of a different race.

But the king: he had called me
He had chosen me now.
I could not escape:
I had to please him somehow.

How could I play
This game of his pleasures,
How could I give in
To his carnal pressures?

So instead of great riches,
I asked for his heart
Instead of seduction,
I gave my best part.

My night with the king
Was a night I discovered
He was only a man
Whose needs were uncovered.

He needed a real friend
He needed a peer.
This king was surrounded,
But no one was near.

One night with the king
Changed our lives forever.
I gained a friend, a crown
A husband and lover.

This poem is based on the story of Queen Esther found in the Scriptures in the Book of Esther. The king was the ruler of Persia (now Iran) and of most of the known world. Like many wealthy, powerful men at the time, he kept a harem of women called concubines who were available for his pleasure and use at any time.

These women lived in luxury and were expected to be ever ready to please the king. If they obtained his favour, they might be given extra trinkets and luxuries. Whatever the king dictated determined their fate.

During this particular time, the king had just recently displaced his former queen for her indiscrete disobedience to him and was now searching for another beautiful woman to replace her. He had snatched up hundreds of virgins from across his kingdom and Esther was one of them. She was of Jewish descent but because of Antisemitism at the time, her family hid her ethnic roots. No one knew she came from these peoples as she entered the royal palace and took her place among the women.

The women were given one year to pamper themselves and get ready to please their master. The woman he chose would become, by marriage, the most powerful woman in the world. It was a coveted position.

Poetic Response to A Novel

This poem is a poetic response to a novel called "Hadassah: One Night With the King," by Tommy Tenny. In this novel, Tenny imagines what it must have been like for Esther and the other women, drawing on his research into Persian customs and practices during this historical period.

He calls it "Hadassah:Night With the KIng" because it focuses on how Esther (also called Hadassah) may have pleased the king: by being the only girl who loves him, instead of wanting something for herself. These particular details fictionalize the details found in the Scriptures but they are feasible. For a more detailed review of this book, see this review from my blog.

My poem imagines what might have been going through the minds of the other girls and of Esther when they were waiting for their time with the monarch. As slaves in status, they had no choice but to sleep with their captor. But how would they approach it, and what would they get out of the situation? Esther decides to go into her night with the king, with love, and her results are far more favourable than anyone imagined.

Historically, Esther later uses her influence with the king to save her nation of Israel from genocide. Jewish people still celebrate her victory with the holiday of Purim. 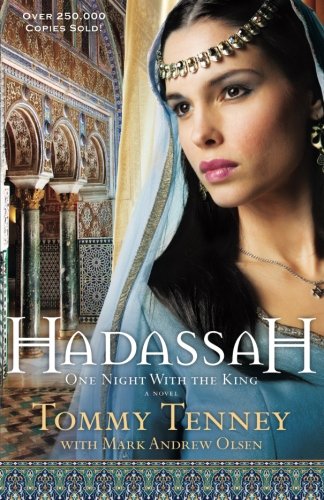 Hadassah: One Night With The King
Buy Now

One Night with the King
Buy Now