20 Tips, Ideas and Prompts To Help Kickstart Your Poetry

Andrew has a keen interest in all aspects of poetry and writes extensively on the subject. His poems are published online and in print.

How to Kick-Start Your Poetry

Writing poetry isn't easy, that's why I've come up with some tips and prompts to help poets with the process of creating a poem when inspiration is lacking and they need a spark to get going.

Many poets rely on inspiration as the spark for their poems and that's often followed with disciplined work - concentrating on rhythm, structure and other poetic aspects to complete the poem. There's no substitute for inspiration but there's also no reason why this process can't work in reverse!

Having some ideas up your sleeve can stimulate the poetic juices and get them flowing in unusual and interesting ways.

Rarely does a poet finish a poem in one session. Even the shortest poems can take a heck of a time and even then some poets are never satisfied! Who was it who said, a poem is never really finished, its more like a sketch, preparation for the real thing?

The following tips and prompts will help all poets in need of some inspiration, be they beginner or veteran.

Try something new! Breaking fresh ground can be stimulating so why not have a go at a completely different sort of poem?

We all have places and spaces we like to go to or have visited at some time. Think about one of your favourite places or a space you've created or found which attracts you.

Work your through the lines and edit, shape and tie up loose ends to complete your poem. 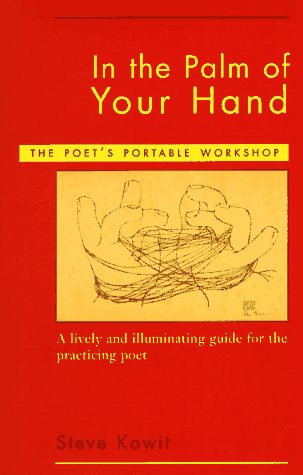 In the Palm of Your Hand: The Poet's Portable Workshop
An excellent book with clear and simple steps that will lead you to the magic door of poetry. Great exercises that encourage and guide. Recommended.
Buy Now

Poetry can come out of the blue when you least expect it. By being spontaneous you have a chance to create poems with immediacy and freshness. Take a headline for example, something that 'hits' you in the news. What are your feelings towards the people and the event itself? Jot down some initial words and lines, no matter how simple or crude, use them as the fuel for the rest of a poem.

Perhaps you have a particularly strong interest in animals, pets, gardening, singing? It could be anything. What is it about the subject that excites you, stirs you up, creates a tension? Bring the subject to life by translating your emotions into lines of poetry, the here and now into a structured form.

When you dream, all sorts of images and events come streaming out of your subconscious. In my experience most dreams are extremely personal and unique to the dreamer which means that basically you have a one-off source of surreal material.

Have you ever looked out of a window? Of course you have. What about the view? Can you see far, or only into next door's yard or garden? What about a hospital window? Were there mountains, a sunset, trees? Or a bleak, bare landscape with only your reflection for company?

Driving, walking, on a bus, in a plane, visiting people and places - we make small and long journeys all the time. The trip you took as a teenager, the train you were on just before you got married, that one-off horse ride you tried to avoid?

A poem based on letters of the alphabet is called an abcedarian. You can choose to use all 26 letters to create a poem or use vowels only, consonants only or a sequence to create your alphabet poem. Tricky, but fun!

Poetry is all about form and rhythm, using words in beautiful and challenging ways to bring hidden emotion, thoughts and ideas to the surface. The rhythms occur when syllables and texture meet in a kind of music; the form allows this magical pairing to exist and thrive within a structure.

A poem works when all the components come together in harmony, when it rings true.

If you have a pet or you know someone who owns one, take time to study behaviour and habits and personality. That crazy parrot next door is worth a second look!

Poems come in many shapes and sizes. Concrete poems can be created by shaping words and elements into an object or being, such as a person or animal.

An acrostic poem is one in which the first letter of each line makes up a complete word or sentence.

That's his way of saying Hello.

A mesostic poem is similar to the above - but the main word features centrally, with the words in each line either side giving the impression of a growing plant or tree. You can learn more about mesostic poetry here.

A sonnet is a form of classical poem usually written in iambic pentameter, an iamb being a poetic unit with an unstressed and a stressed syllable, de-DUM. They originated in Italy but were adapted when they came over to England in the 16th century.

There are three types of sonnet, the most popular being the 14 line Shakespearean which follows the classic rhyme scheme ababcdcdefefgg. The turn or volta comes in the final two lines, usually a conclusion wrapping up the argument or statements made in the previous eight lines.

For inspiration, here are the opening lines from William Shakespeare's sonnet 138:

When my love swears that she is made of truth,

I do believe her, though I know she lies,

A couplet is a two line form of stanza, usually with full rhyme but sometimes blank, most often as part of a longer series. They can be dramatic and powerful in short bursts.

These figures moving in my rhyme,

Who are they? Death and Death's dog, Time.

Haiku are short 3 line poems originally created in Japan but now very much a part of the modern poetry scene. Traditionally they have 17 syllables in a 5.7.5 structure and are based on natural phenomena with a Zen/philosophical leaning.

Think of all the pictures, paintings, photos and movies you've ever seen. Work out a short list of 5 and focus on a certain event, image or storyline. You could look at:

I carry a small pocket-sized notebook with me wherever I go. You never know when inspiration might strike and to help keep the idea/feeling/observation fresh, a few words or lines in a notebook can be a catalyst for your next poem.

This is a technique used most famously by songwriters like David Bowie and others. It's sometimes referred to as found poetry.

Birds have long fascinated poets. More than any other animal they seem to spark the imagination and can inspire great work. Just think of Elizabeth Bishop's 'Sandpiper' or Emily Dickinson's 'Hope is the thing with feathers'; or how about Wallace Stevens and his 'Of Mere Being' or W.B. Yeats and ' The Wild Swans at Coole.'

Sometimes a poem can begin with an accidental or intentional use of simile or metaphor. For example, you could be out with family and friends and someone might say ' The clouds are islands today' or ' That stream looks like a silver snake.'

Either comment could spark the imagination and begin the poetic process.

Learning from established poets can also be helpful. How about this simile from Wallace Stevens - 'Snow sparkles like eyesight falling to earth' or think about the extended metaphor in a poem such as Caged Bird by Maya Angelou.

Philip Larkin in his poem The Trees uses simile to wonderful effect:

The trees are coming into leaf

In daily life we experience so many different situations. In the supermarket, on the street, in the bar, at home, on the bus or in the car or on the phone, even online. So many voices to listen to! But sometimes a snippet of conversation or a few words overheard can spark a poetic impulse.

Local dialect is often interesting to focus on because it isn't like formal speech. It can be knobbly, eccentric and have a peculiar vocabulary.

I read an awful lot of poetry, both modern and classical, free verse and rhyming. By close study of other poets you increase your chances of being inspired, of learning about technique. And it can often happen that as you read certain lines stir up the imagination - you find yourself wanting to start a fresh poem of your own on a different subject.