Perspectives of Yusef Komunyakaa's Love and Lust in Poetry

Yusef Komunyakaa is known to write with creative metaphors, insightful symbolism, and impressionistic details. As love and lust is described and morphed throughout Komunyakaa’s poetry, he shows great skill in capturing one’s senses and emotions with his diverse, and somewhat crude, vocabulary. He compares and describes love and lust to religious and mythical beings or symbols, animals, inanimate objects, and physical sensations, all while noting and describing his seemingly usual intense physical and emotional feelings. I find this to be especially true in the poems “Providence”, “Sandhog”, “Moonshine”, “South Carolina Morning”, “Charmed”, and “Jasmine”.

In many of Komunyakaa’s poems, a common theme is present: the comparison of love and lust to inanimate or non-material objects. In his poem, “Moonshine”, Komunyakaa uses a clever metaphor; “The names of women melt/ In their mouths like hot mints” (29-30), as comparing the names of the many women the group of men he is describing has courted to breath mints – the taste of one lasting just long enough until its’ dissipated and replaced with the next. This theme is similarly displayed in “Providence”, “I walked away with your face / stolen from a crowded room” (1-2). He says this meaning that her face is embedded in his memory; despite the amount of people there were present to evaluate and analyze, it was she, (and her face), that occupied his attention. He goes on to say, “I have you inside / A hard question, & it won’t let go”. Komunyakaa is describing his desideratum for this woman similar to that of a nagging question as to which you cannot remember (or possibly don’t know) the answer for, always holding a presence on the surface of your mind when it isn’t commandeering your full focus.

Komunyakaa, in his poetry, makes many relevant references to Greek mythology. In the poem, “Sandhog”, he states, “They tango half the night / before he can’t believe she isn’t / Eurydice” (1-3). Eurydice is a Greek goddess who was considered to be beautiful, young, potent and coveted. Eurydice was married to Orpheus and on the day of the wedding Eurydice, while listening to Orpheus performing songs, stepped on a poisonous snake and was killed. Orpheus, seeking to regain his beloved lover, traveled to the underworld and succeeded in convincing Hades to allow Eurydice to return with him on the premise that he did not look back at her following him until they reached the mortal world. Not fully trusting Hades, Orpheus at the last minute, looked back upon Eurydice to be sure she was truly following. While she was indeed behind him, the moment he glanced back, Eurydice was snatched back into the underworld with no more opportunity to be retrieved. Komunyakaa compares the man’s feelings of the woman being highly similar to Eurydice probably because she attained the aforementioned and favorable characteristics of Eurydice, and because of the woman’s seemingly unattainability because of her perfection, as similar to Eurydice. As mentioned previously, Komunyakaa commonly compares his feelings of love and lust with mythical symbols, the same is to be said of superstitious symbolism. As seen in the poem, “Jasmine”, Komunyakaa draws an emotional connection between seductive women and the proverbial superstitious sayings of his late grandmothers:

Towards me, as if a cat traversed

My path beneath the evening star.

Which one is wearing jasmine?

If my grandmothers saw me now

The two women he describes are enticing and provocative by nature, inducing in him an unsettlingly, tempting desire to have relations of some sort with them (or one of them). This type of behavior, which is usually taken as ill-favored, was especially distasteful amongst the older generations such as that of his grandmothers, leading to their strong subordination of this type of woman and in turn teaching their male children and grand-children to be especially careful to avoid these women. The phrase, “The devil never sleeps” is symbolic of the never-ending and cyclical nature of temptations and “evil” – which the women must be if they are willing to commit fornication or adultery. Another nice example of the religious metaphors of Komunyakaa’s work is from the poem “Providence”; “…& This morning makes us the oldest song in any God’s throat.” (34-35). I think Komunyakaa is trying to relay the divinity of the union between the woman in the poem and himself and that the union of a man and woman is a sacred, natural, and age-old tradition that Gods and humans alike look favorably upon.

Other themes amongst “Pleasure Dome” poems, are the physical feelings expressed and compared in relation to the love felt by Komunyakaa. Again, quoting from “Providence”, “Now you are on my skin, in my mouth / & hair as if you were always” (43-44). This, to me, is thought to mean that the woman has contributed to him a feeling of completion and fulfillment he never experienced before her. He seems to feel as if, through their shared emotional and spiritual bonds, they have been unified and integrated into one, being a part of one another physically and mentally. Love and lust in terms of physicality is expressed quite differently in “South Carolina Morning”. Komunyakaa states, “…This is / Paradise made of pigment / & tissue, where apples / ripen into rage & lust” (18-21). In this poem he is describing a beautiful woman whom he is admiring, he likens her body and physical attributes to paradise, as paradise is perfect and he finds this woman to physically be so. Yusef goes on to correlate the ‘paradise’ of her body to apples that ripen into rage and lust, this is probably in reference to the lustful feelings highly attractive women incite within men and the rage men experience when others are also attracted to said woman, especially if she is mutually interested. Animals are also compared with Komunyakaa’s feelings of love and lust. As written in “Charmed”,

I jump between the cat

And a bird. The cat cries

As if I had struck her with a stick

…She moves toward the bird.

Toward me-and I them-

These lines of the poem compare the similarities between a cat hunting a bird, predator and prey, with the act of humans pursuing another person, mostly for a relationship.

Yusef Komunyakaa exhibits excellent poetry writing skill. His ability to emerge, engage, and manipulate people’s emotions simply through the use of unique rhetoric is outstanding. Komunyakaa commonly uses certain symbolic imagery and impressionism to do so through every-day subjects as religious figures or ideations, animals, inanimate objects or feelings, and various physical sensations. A few of the main themes of his poems are love, lust, and women, which he grippingly transmits to you in various forms and stories. The poems cited in this essay are just a slight representation of the brilliant metaphors and similes throughout Komunyakaa’s many works. With a combination of boundless talent and immeasurable life experience, arises Yusef Komunyakaa’s mentally delectable poetry.

Get Your Own Copy of Komunyakaa's Work! 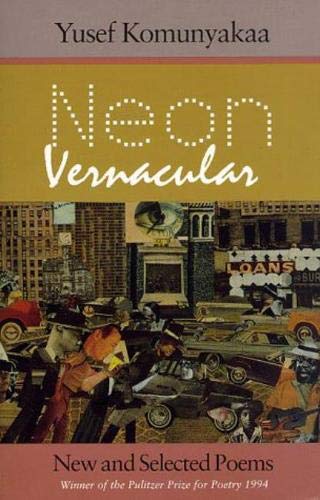