Listen to the Puss in Boots!

Puss in Boots is the most popular fairy tale with an animal in the title and the most known story about a trickster.

In most of the fairy tales for kids we expect heroes with classic virtues: courage, honesty, empathy ...

It seems Puss in Boots is just the opposite. He lies, schemes, threatens ... He achieves everything with trickery.

Not exactly a role mode model for kids, right? No wonder why brothers Grimm didn't want to include this story in their collection.

But Perrault didn't wrote it for children. He was a member of Louis XIV court, where fraudsters like Puss from the title were probably in majority.

The power of words

One of the main reasons for popularity of fairy tales is the possibility of their interpretation. With only basic knowledge of symbols and background of their authors we can find all kinds of interesting, sometimes almost unbelievable explanations.This one is no exception.

On one level it can be understood as a story with a questionable moral where a lie (actually series of lies) serves as a perfect tool for climbing up the social ladder.

On the other it presents pretty classical rags to riches pattern with predictable happy ending, similar to the story of Cinderella. While older sons enjoy in the inheritance consisting from a mill and a donkey, representing the powers of production and transport, the youngest son got only a cat. Even a small child understands the mill and the donkey carry huge potential benefits to their owners.

But the cat? Third son doesn't have a house or a mill, where an animal could be of any use. A pet in his situation works much more like a joke, an unnecessary luxury in the hands of somebody who doesn't have anything to eat.

It sounds cruel, but logic when he decides to kill the cat, eats his meat and use his skin to make a pair of gloves.

On the other hand this position gives a total freedom to the youngest son, while the older ones have to deal with responsibility coming with their properties. Third son can do anything he wants. He can become anything he wants. With a help of the cat, who can talk (and is pretty smart as well!), he really does.

Everything in the story is about words, this powerful instrument with ability to change the cruel reality into classic fairy tale ending. When youngest son said he will eat a cat, an animal starts speaking. This is the first (and actually the only) sign of his magic powers. He promises to his master he will make him incredibly rich and powerful, he just needs a pair of boots to start working on the plan.

What version of Puss in Boots are you familiar with?

Do you prefer reading, listening or watching?

How can right words turn illusion to reality

Cat (in man's clothes) managed to open the doors to the king's castle with flattery. He brings gifts (caught by pretending being dead) and explains they are sent from the nobleman who doesn't exist. A king is not only happy about the gifts, we becomes curious about the cat's master, mysterious count, too.

When initial trust of the king is already built, Puss makes the next move - he introduces his master to the king (and his daughter). But a boy in a torn shirt could never pass as a nobleman ...

So cat arranges they meet in the after the non-existing robbery near the lake where his master supposed to take a bath. Thanks to his convincing story cat's poor master can get into king's cottage with borrowed clothes. This is a second example how clothes make the man.

Well, clothes are still not enough. Puss in boots must provide some evidence about his master's wealth as well. He can't invite a princess to the mill which is by the way owned by his master's brother. He needs large property and a castle.

To achieve that, he threatens all sorts of people working by the road to lie about the ownership of the land. Apparently his words are convincing again.

For the final, the most risky move, a cat enters the castle owned by an ogre with magic powers (shape shifting). With simple yet effective flattery he convinces much more powerful opponent to change into a mouse, so he can eat him. Now his master can become the new owner of the castle. The doors to marriage with the king's daughter are wide open!

Proper words in the right time and place are obviously more powerful than brute force and magic together. A cat manages to turn illusion of his master's wealth into reality, so both can make a huge jump on social ladder.

Did they deserve that? Maybe yes, maybe not. Can something like that happen in the real world? Always was, always will.

Who is the author of Puss in boots?

Although Charles Perrault wrote this tale as first, it is no secret, he got inspiration from from Neapolitan's poet Giambattista Basile's Tale of the Tales and the story titled Gagliuso (also known as Caglioso) with very similar plot but slightly different message. Basile's version is about ingratitude of the master who doesn't appreciate cat's help, while Perrault's offers happy ending for both.

It is not hard to find similarities of Puss in the Boots with life of Charles Perrault, who wrote the story when he was way above 60 years old and already had all kinds of experience as a secretary in the court of Louis XIV. Just like the title character of the story he climbed the social ladder dealing with many dangerous and powerful opponents by the way.

He was able to see how important is an image and one of the main messages of the fairy tale is actually Clothes make the man, what is pretty cynical if we think of this fairy tale as a story for kids.

With grown up audience in mind (and this was Perrault's only target) undertones of the tale become much more understandable. He also had a chance to experience the limitations of his position where he got tremendous power and a lot of money but was still excluded from some areas of power because he was not born in a noble family.

In a way he was the real Puss in the Boots, unimportant Pawn on the chessboard of life who played all the right moves and achieved numerous benefits while the final promotion to the Queen (or at least Knight) stayed out of touch for him no matter what he did.

Word or two about illustrations ...

All presented images (except from YouTube and Amazon) are in public domain. They are work of Harry Clarke, Walter Crane and Carl Offterdinger, who all died more than 70 years ago. All presented illustrations were also published before 1923. For more info (and many more pictures from this popular story) follow this address:

This powerful fairy tale with all its colorful interpretations is a perfect base for a dramatized presentation on different media. Audio book is great option to introduce the kids to the classic story and show them how to make one dream come true. 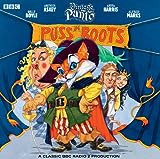 As Puss in Boots shows us, one truth may not be enough!