If you took Lord of the Flies, The Hunger Games, and The Warriors, mashed them together, this book is what you would get. Quarantine: The Loners, written by writing duo Lex Hrabe and Thomas Voorhies under the pen name Lex Thomas, follows two brothers, David and Will, as they begin their first day of the school year in their newly built high school. Just before the first bell rings an explosion is heard from the east wing of the school. Students begin to panic as a virus infects every last student within the school, a virus which is deadly to adults. All the teachers and adults die almost instantly. A military quarantine is put into effect around the outside of the high school trapping all the students inside. Over the course of the next year violent gangs begin to form between the students such as Varsity (the jocks), The Pretty Ones, Sluts, Nerds, Freaks and Skaters. David and his younger brother Will are not part of any group and must fight to survive against the entire school.

I finished reading the books 400 pages in just under three days becoming completely engrossed by the story and its characters. A book hasn't hooked me in this bad since The Hunger Games. Quarantine: The Loners is considered a young adult novel but this is a case where I feel that the book is way beyond that of a young adult novel. The book is full of graphic ultra-violence, which is quite unsettling at times, and dark themes about the human condition and what some will do just to survive. The novel seems to accurately depict exactly what would happen if a situation like this ever really occurred.

Quarantine: The Loners is very well written, grabbing hold of you from page one and never letting go until the end. You'll easily be rooting for David and his young brother Will the entire time as they face off against the entire student body. I recommend this book to anyone who's a fan of The Hunger Games, Lord of the Flies or just wants an extremely captivating, well written book to read. 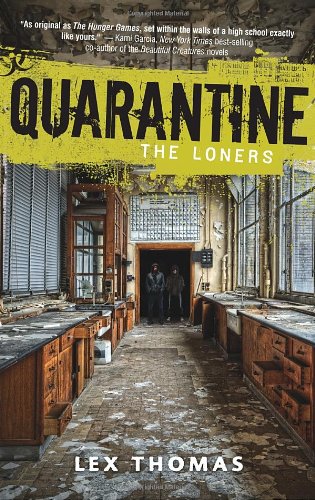 The Loners (Quarantine, No. 1)
Buy Now