In my former job I was once asked to write to Philby's assistant Patrick Seale, also Philby's replacement as Observer correspondent in Beirut. I suppose my already existing interest in the labyrinthine affairs of Lebanon and the Middle East was heightened by this episode, but a prior interest in Lebanon is hardly a prerequisite for being impressed by Ben Macintyre's book on Kim Philby.

This historical biography, then, which reads like a novel in places, is the story of the British diplomat and MI6 operative, Harold ('Kim') Philby (1912-1988), who, having been recruited by Soviet agents while studying at Trinity College, Cambridge in the early 1930s, proceeded for the next 30 years or so to spy for the Soviet Union. The book complements Anthony Cave Brown's 'Treason in the Blood', an account of Kim Philby's life which is drawn on his heredity in relation to his father St John Philby, colonial administrator turned Saudi adviser, who was once jailed for anti-British statements. Kim Philby's name will always be associated with Guy Burgess and Donald Maclean, whom he himself recruited to the Communist cause, and who defected to the Soviet Union in 1951, being eventually followed by Philby himself in 1963, when his past was catching up with him.

It is a riveting read, told from the standpoint of his friendship with Nicholas Elliott, fellow MI6 agent, who had long defended him from charges of being a spy and who only in the early 1960s became finally convinced of his complicity with the Soviet Union and famously confronted him In Beirut, where he worked as a journalist, in early 1963, evincing from Philby a limited confession.

What happened next is intriguing. Amazingly, even after the escape of Burgess and Maclean, an old boy network of public school alumni led by Nicholas Elliott seemingly protected Philby and had even recruited him back into MI6. When strong evidence against Philby eventually emerged that not even Elliott could ignore, Elliott — according to Macintyre — not only offered him an immunity deal from prosecution, but also facilitated his escape from Beirut to the Soviet Union. Macintyre offers the explanation for this by way of contrasting the treatment of Philby with that of George Blake, also a Soviet spy in MI6, because — claims the writer — Blake, jailed for 42 years, was not from the same social class as Philby.

This interpretation will doubtless find a resonance among many readers, not least in the US, where some leaders of the intelligence services had become deeply suspicious of Philby in 1951, then serving as a diplomat in Washington, DC. Certainly, FBI Director J. Edgar Hoover was known to have been incandescent that someone such as Philby, responsible for the betraying of many damaging secrets to the Soviet Union, could be allowed to escape prosecution.

Whether I myself buy this interpretation, I am not sure. Interestingly, Philby's limited confession in 1963, received by MI6, specifically excluded spying after 1949, the year when he had moved to the US: thus, to the Americans MI6 could claim conveniently — if implausibly — that his affairs were purely a British internal matter.

This instance of British institutional evasiveness does indeed ring true. 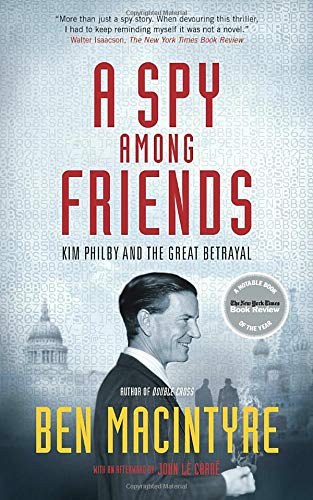 A Spy Among Friends: Kim Philby and the Great Betrayal
Buy Now

Treason in the Blood: H. St. John Philby, Kim Philby, and the Spy Case of the Century
Buy Now