Our Book in Question

Book 1 of 2 in the Resurrection Series

Life has its up and downs, but what happens when people you love and know become infected and want to eat you? That’s what our characters have to deal with. Between keeping themselves alive from the infected people who wish to feast on their flesh, and keeping themselves from the dangers of other survivors who don’t care about them, our 5 protagonists are looking for a safe place to settle. After all, no heat or electricity can make winter brutal for any living creature who doesn’t know how to withstand the cold. Not to mention, they still don’t know each other very well and the secrets they may have hidden. As they search for their safe haven to start fresh, they lose a few of their members and learn quickly how much team work matters. Kyle, Annie, Frank, Parker, and Hughes have to learn to live with each other in the worst of times, but their lack of a leader can cause havoc.

With Annie holding onto her secret of having once been a part of the infected trying to kill the healthy humans, and turning back to her old self after a few short days, she has put herself into an isolated situation from the others, who are weary of her at first. They each have their own skill set that helps them escape to an island, that they hope to make home, but find it just won’t be easy to do. That’s when all hell breaks loose and the group is faced with irritation and blame that causes aggressiveness they don’t need and can’t afford to have. How will they survive if they can’t get alone? What will they do if they learn of Annie’s secret?

"Go ahead and laugh, but it's not funny. Just about every famous person you've ever heard of has either been bitten or eaten. Think about it. Stephen King. Justin Bieber. Barack Obama. Bit. Imagine getting chased in Hollywood by Arnold Schwarzenegger after he's been bit."

Resurrection: A Zombie Novel by Michael J. Totten is a marvelous book about a post-apocalyptic world in which a virus leaves millions of humans in a crazed state that makes them only wish to eat the flesh of their fellow mankind. With so many twists and turns, you are able to develop ideas on how the characters were before the virus spread, how they have changed, and different things that could easily affect how you would view another human. It was delightful to be able to read about some of the history leading up to the outbreak on each character, while being able to learn what made them tick. The way the characters interact had me laughing from time to time as they are so different and stubborn in their own ways that it makes it hard for them to agree on things. I loved how it brought up a lot of different ideas and thoughts one might have before an outbreak like this happens as well as how it could change the way one might feel or think once they realize they may be the last alive to help set up a new society. Not to mention, how some things we know can go out the window when your life is depending on you being super careful and cautious out the window.

Watching the characters deal with issues with their first major problem, other survivors definitely gave me the impression that in a world with no rules, people no longer try to make friends or even help each other out. I had felt completely anxious and sad that other healthy humans couldn’t be bothered to be kind to our main group of characters. I understand they had their reason, but it did remind me how in real life, without a zombie outbreak, the majority of the human race will only look out for themselves and what they believe belongs to them. It was refreshing to see how even though sometimes you don’t get along with your team, how a common enemy can pull you together, even if the enemy is survivors who could be potential assets to your group. I also found that the idea of us, humans, and thinking we know a ton, to be quite lacking.

Totten had brought a valuable point up in the book, whether he meant to or not. If something should happen, where we needed to live off the earth and a huge portion of our population is dead, or heavily diseased and dangerous to be near, how would be survive? A lot of people take for granted the fact they have heat, running water, electricity, and food, so without out being able to just purchase it and having to resort to growing it and such, our survivors would need to learn a lot of information. I enjoyed the idea of the characters going to look for books on farming, building, and anything else they would need to learn how to do, but it got me thinking about how everything today is slowly becoming that of a digital world. Yes there are still libraries out there with millions of books, but most libraries are in areas that could easily be surrounded by the infected. Even in Resurrection, that could be an issue and yet when Kyle brings up they could just obtain the books to teach them how to do things, the other characters didn’t seem as concerned about the idea, as I was upon reading that. After all, reading how they have to be careful just going to a sporting goods store and all the concerns they have when doing things, makes the idea of going into a library very worrisome.

However, it wasn’t just the knowledge most people don’t have that brought this story to my mind in some serious thought, it was seeing how something as simple as knowing your blood type and how blood transfusion work, seems to leave you in times of panic. We all know that certain blood types just can’t be mixed with others and often this knowledge isn’t needed. Most of us don’t even know our blood types, myself included, because we just don’t always see the need to know such information, or we just simply forget it. So I wasn’t surprised that the characters didn’t know their blood types off the back of their hand, but I found how simple things we have learned since grade school about other people’s blood containing diseases and even allergic reactions if placed in your own body without proper care could just disappear until after doing just that. I can’t say I would have thought of it either, but at the same time I would like to think that it’s something I wouldn’t feel right about. Though, how could any of us be sure we would do something different?

Totten seemed to be able to use the characters to remind us of how important some of the things we take for granted are. I enjoyed seeing how friendships can be broken or made easily, how teamwork is important in the matter of survival, and how people would truly act in a post-apocalyptic world. To see common sense that we have go out the window in some situations and in other situations seem create stealthy humans with common sense and the ability to have sound judgement. Not everyone would have been able to write about such a world, and have characters make mistakes that leave you shaking your head. To be able to see the characters as imperfect humans doing their best to get by in the world, definitely makes this novel a delightful read. I would rate Resurrection: A Zombie Novel 5 stars out of 5 stars. Definitely a must read for the zombie lover. I would say if you love zombie movies and shows, you would find this book right up your alley. With characters you could relate to, and situations that aren’t impossible to imagine, you will fall in love with the writing style and story that Michael Totten gave to us in this short, page turner. 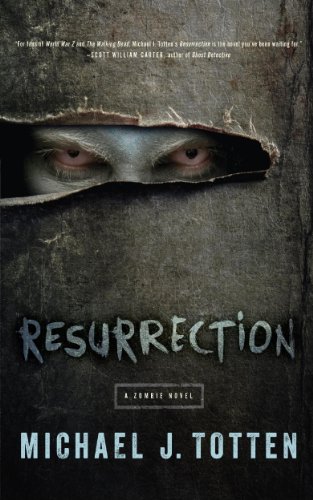