They say that history repeats itself every few years and if that's true then the resurgence of the '80's has (or already is here) arrived. If the '80's have already made a comeback, than today's young gay men have missed it.

During those days after the Stonewall riots, gay men were reinventing themselves and at the forefront of this reinvention was Al Parker. Parker was what every gay man aspired to be. He had a bit of the bad boy image, yet had the qualities of "the boy next door." What the general public didn't know was he was one of the major pornographic actors of that era.

In the book Clone: The Life and Legacy of Al Parker Gay Superstar by Roger Edmonson, we're taken back to how a quiet kid of high school became the most sought after man in the world.

It began when he was a tenth grader in high school when he stumbled upon an ad in a magazine and after paying a whopping $2 for pictures he started to question his sexuality. Like most young gay men, he thought he was alone in his thoughts but after receiving those mail order photos, he found he was attracted to the handsome men in that package.

While in high school, he was given the nick name "Pony Boy" in the locker room and except for that, it seemed most of the people in his school didn't know who he was. He had a few friends but no one knew what he was trying to figure out.

His career goal was to become a doctor and after visiting his older sister one day at college, his return trip to his hometown would prove to be memorable. After getting off of the bus, he was followed and raped by a much older man who had been sitting next to him on the bus ride home. The older man was quite "happy" with what he was doing to the young man on the bus, but Parker wasn't expecting rape.

With that experience behind him, he and a friend found themselves at the legendary Woodstock where for three days Parker spent time with another man and was introduced to a variety of experiences. His friend ended up making the trip back home alone as they had been separated at the festival, but then the shy kid suddenly became the talk of the school when his face appeared on the poster promoting the film. This would be his first taste at fame.

After graduation, he attended college for a year and decided that this wasn't for him and told his father that he needed to explore life on his own. He packed up and headed west where he stayed with his college roommate and loved being in California. When he made the decision to live there permanently, he returned home to break up with his girlfriend but there was one small hitch. She was pregnant and now he found himself wondering if he should stay and marry her (and possibly lead a double life) or request she have an abortion.

During the time he was visiting in California, she had fallen into the wrong crowd and with her pregnant with his child the decision was to have an abortion. They flew to New York and once the procedure parted ways.

Within days of returning to California, he found himself working at a gas station and within a few days found himself working at the legendary Playboy mansion, where he would work for the next four years. While still having doubts of his sexuality and being let go from the mansion, he was promised unemployment but was turned down. He needed to make $300 and then get laid off.

According to the book, he was a contestant on the game show Name That Tune (although some rumors had his as a contestant on The Dating Game) his opponent was a 63 year old woman who was beating the pants off of him but eventually he won and his prize was a trip to New York.

Still struggling with whether he was straight or gay, he took a bike ride to the beach, picked a girl and started talking with her. He offered her the other ticket and after agreeing they didn't speak to one another until the trip.

On the plane he found out she was bi-sexual and knew the two would end up having a great time. Now with his sexuality firmly planted he wanted to make up for "lost time" and met a man named Richard. He wasn't looking for a relationship, but the two eventually ended up together for many years.

With financial problems, Parker started modeling and then eventually turned to film. He had been studying film and now that he was known as a pornographic actor he found trying to get a job within the legitimate film industry hard. Whether in front or behind the camera, he knew a lot of people from his Playboy days but no one would hire him for legitimate work.

As the years passed, he and Richard formed their own company and learned about the process of the mail order business and while he was famous to a select few, he wasn't making the money he should have been. The two also had a legitimate side business but there were still financial problems along the way.

Although the book reads like a written documentary, Parker was fascinated with cameras and would carry around a video camera wherever he went. According to the book there are hours upon hours of footage as well as a few miles to boot.

It also reads as though this could be a primer for any film school student as the couple learned of how to produce, cast, edit and film. Their house literally became the soundstage for many of their movies and while filming, their good friend Winn (a set designer) would be busy building sets in one room as filming took place in another part of the house.

Once the AIDS epidemic hit, Parker became an advocate of safe sex and insisted that his performers wear condoms. In October of 1988, Parker, along with other top performers of the time, made a guest appearance on Donahue in which they stumped the audience as to what their "profession" was. It was good of Edmonson to bring this up since I think this was the first and only time adult male performers (other than male strippers) had been profiled on a talk show.

So why the title Clone? It's simple. Parker chose to wear his hair short, a trimmed beard and didn't live up to the derogatory names people chose for gays. If you look at pictures from that era, you'll notice coordinated clothing, a clean cut look (although beards and moustaches were trimmed) and short hair. Most men preferred this look instead of a rougher look.

Once you sit down with Al Parker you really don't want to leave since this is one good biography which is well written as I stated in a documentary style. For those who remember that time in history, it's a bittersweet memory down memory lane. 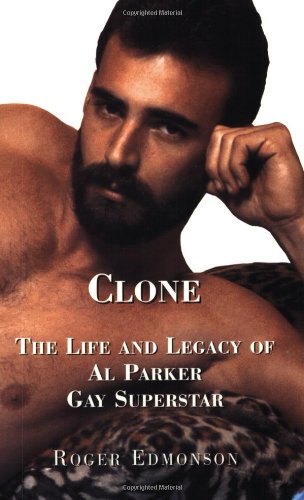