Retro Reading: Conversations With My Elders by Boze Hadleigh

As a freelance writer you can pretty much write what you want (providing the material is interesting to the editor and the audience you’ve decided to write for) and hopefully your story will be picked up.

However, doing a question and answer (Q&A) piece isn’t that common and is usually used when a writer is lazy, or can’t find the angle to the piece.

For all its worth, this out of print book (published after the subjects passed away) can be at times really interesting or just plain boring considering the answers to the question. The conversation though with Rock Hudson does make you wonder if it was an actual conversation or not.

Author Boze Hadleigh has compiled six conversations with six men in the entertainment industry who led an open secret within the industry. All were gay and each interviewee guides us through legendary Hollywood gossip and how the industry treated them.

Generally, an interview is just a bunch of chronological questions with the answers given and a story is written. In this instance, Hadleigh has more of a conversation with the interviewee which engages both. (When I do interviews I too use this approach since it’s easier to get more information from the subject).

Opening the book is Sal Mineo. His conversation with Hadleigh sets the tone, but after his conversation, that tone disappeared. It was lost with Luchino Visconti and Oscar winner, Cecil Beaton.

The conversation with German director Rainer Werner Fassbinder is probably the most intense, while George Cukor seemed a little tense and didn’t want to dish too much in the gossip department.

Although Hudson is the cover boy, it had been disputed by his former publicist that the conversations didn’t take place. Hadleigh insists that the two met twice.

I, too, wonder about the conversations, because I don’t think Hudson would have talked as frank as he did. I’m sure that if he had talked this frank, a lot of it would have been off the record (even I have tapes of celebrity interviews where we’ve discussed things off the record).

if you’re a fan of old Hollywood, you’re treated to the past and a little gossip. For those interested in the industry you’ll get a little behind the scenes advice and for budding journalists, a guide on interviewing techniques.

Although the material is dated, it’s still relevant in today’s world. Some of their hopes came true and some are still being fought. 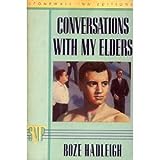 Conversations With My Elders
Buy Now