I’m not a fan of science fiction, but I do love disasters and in this day and age, this is the perfect fit for 2020.

Plus, I needed to put another book in the surprise book box which one of my unsuspecting friends will be receiving.

Released in 1978, the events portrayed in the book are pretty much playing out now and the time span is between 1979 and 1981. A definite book to travel back in time with.

Engineer Lawrence Pick is an overworked government employee and the Director of CRISES, a prestigious scientific-establishment post. The department specializes in all types of disasters, whether past, present or future.

Prior to attending a conference in Miami, he’s approached by two scientists regarding climate change, and then again at the conference he learns more about it. A small task force is assembled in the hope of stopping any potential danger.

Based on their work a solution is not found and they disband.

A few weeks later, they gather again and this time they hope to figure out what to do following a freak mid-Atlantic tornado.

With a few more resources they come up with an idea or two but they know that the ideas aren’t feasible and again the group is disbanded and Pick is fired.

While “hiding out“ in the town where the tornado happened, Pick’s girlfriend, Rita Havu, a disaster sociologist, is observing the citizens under the guise of writing a book. Pick becomes more obsessed with one of the ideas and begins to devote his time to figuring out how to make it work.

The book is written in five parts and in the final part, the weather has gone haywire with temperatures over 100 plus degrees in the summer and while the adopted plan will take an extra year to implement, the typical planting season is now in the middle of winter due to the warmer temperatures.

Everyone is miserable due to the weather and social unrest is the new normal, along with food shortages and high unemployment.

Getting to the final part of the book is somewhat of a struggle because there isn’t too much going on. Of course the real story is confined to the end.

With everything Herzog writes in the book, it’s very prophetic since the characters are going through everything that this year has brought. It’s very eye opening. 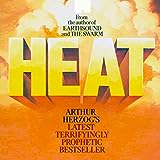