Fame Can Be a Killer

Have you ever noticed that some films, TV shows and novels usually have four main characters who have been best friends for years? I never really noticed it in the past, but I think Friends brought the multi friend trend to light.

In Show Business Kills by Iris Rainer Dart, the same holds true in which four college students have remained friends for over thirty plus years. The main difference is the friends have all reached their dream of working within the entertainment industry.

What the four friends don’t know is another student has been trying desperately to reach them for years in the hopes of getting a job.

This act of desperation soon turns into a stalking situation and none of the four friends knows about it. As the friends count down to a much needed Girl’s Night, we’re introduced to Jan O’Malley (the soap opera star); Ellen Bass (the studio executive); Rose Schiffman (the Oscar nominated screenwriter) and Marly Bennett (the former sitcom star). Each has had a bad week and they hope to relieve some of their stress when they get together.

Jan is facing a contract renewal on the show and is worried that the producers are going to write her off with a cliffhanging episode. She’s worried at her age (49) no one will hire her and she has a four year old son and sister to take care of. Marly, on the other hand, has only been going on commercial interviews since her last show went off the air and her marriage to Billy Mann, the “King of Late Night” is headed for divorce.

On the production side of the coin, Ellen has been dealing with sexual harassment from her male colleagues and Rose has an offer on the table for a movie that is very close to her heart, but her agent wants her to just sell it and have the producer hire someone younger to re-write the script. Something she doesn’t want to do.

With this “midlife” crisis against them, they have to contend with tragedy when one of them is accidently shot by the desperate classmate during an unexpected meeting. As one of them lays in critical condition, it’s up to the remaining three to get through this together.

Now, I have to say that I really liked this book. Not loved but liked it. It starts out great but around chapter 14 the momentum starts to slowly fade away.

In fact, this is the first titled chapter which had me scratching my head. My first thought that maybe Rainer Dart had titled the chapters as a guide, but then later another titled chapter came up and so on.

I didn’t like these titled chapters, since Girl’s Night was now taking place in the hospital and each titled chapter is one of the characters telling a story.

While a good touch, I just felt it wasn’t necessary. These long drawn out chapters ended up taking away from the story. Don’t get me wrong, it was a good way to flesh out the characters, but sometimes, I did find my mind wandering.

Of course it’s hard to review a book with not trying to give away everything, but I did find the very last paragraph probably the most powerful one I’ve ever read.

Every emotion is touched on in this single paragraph and to me that’s great writing. Based on that paragraph alone, I thought that a lot of the previous dribble made up for it.

If you’re looking for something about behind the scenes in Hollywood, then I highly recommend this book, which was published in 1995. 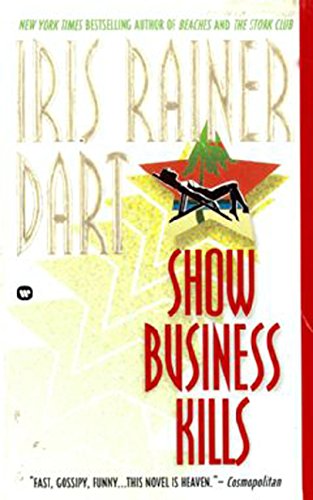