Review of Batman: Gates of Gotham

The graphic novel showcases solid artwork and an amazing story that focuses on the pressures of maintaining a legacy as Dick Grayson and Damian Wayne step into their roles the Batman and Robin of Gotham as Bruce Wayne works to set up Batman, Incorporated. Together, they set out to secure Gotham against the threats of super villains.

The Families Will Fall

Two stories play out in the graphic novel and tie together as the plot approaches its climax. One story, set in the late 1800’s follows the patriarchs of Gotham’s old, prominent families—including the Waynes and Cobblepots—as they contract two ambitious young engineers to reshape Gotham’s skyline into a modern city to be the wonder of the world. After some astonishing architectural successes, they begin to meet with other business conflicts and building disasters that suggest sabotage and treachery among Gotham’s elite and their genius builders, putting all their dreams for a better future in jeopardy.

In the present, the new Batman, Dick Grayson, struggles to live up to the standards set by Bruce Wayne in his long run as the Dark Knight. The pressure only increases as someone calling himself “the Architect” is targeting all of Gotham’s historic buildings and engineering marvels with explosives, threatening to destroy the legacies of the city’s founding families. Dick tries to not only defend the city but also safeguard the public heirlooms of his oldest friend’s family. That these sites constitute a public legacy to spirit of progress and philanthropy only increases the stakes for Grayson. Similarly, Damian Wayne sees these attacks as a personal assault, and he contends with the fact that, as Robin, he may have neither the leadership nor the crime-fighting skills necessary to stop the Architect. As Batman and Robin race to uncover the identity of the Architect to prevent his explosive rampage, the future and past of Gotham collide.

4 stars for Batman: Gates of Gotham

Key to the City

On the whole, the book does a good job pulling double duty; it presents a thrilling Batman story full of action and detective work and introduces readers to the interplay of Dick Grayson and Damian Wayne as the new Batman and Robin. By making the central story personal for them, readers feel the weight these characters shoulder in attempting to fill their new mantles as guardians of the city. Dick’s sensitivity to being seen as a failure is evident as he attempts the impossible of not comparing himself to his friend and mentor, Bruce Wayne. Though Damian is something of a spoiled and petulant boy, his willpower and determination display an unspoken desire to be recognized as a worthy successor to his father’s public and private crusades. They both know they live in the shadow of Bruce Wayne and the Batman.

The scenes in Gotham’s past help with the slow build of tension and laying a foundation of optimism mixed with distrust, the consequences of which play out brilliantly in the contemporary storyline of Batman’s investigation. They also have a grim, antique look similar to the Gotham by Gaslight graphic novel that really showcase the artistic talent of making the city come alive in multiple time periods. It also helps to establish Gotham City as a character in its own right, which is important since Batman (no matter who wears the cowl) is a hero so closely identified with his surroundings. Having the readers believe in and care about Gotham raises the stakes for the plot and gives more depth to the motives of characters such as Dick and Damian and why they put themselves at such risk to protect the city.

Bridge to the Future

Gates of Gotham is a terrific Batman graphic novel in its own right, standing in the long tradition of books like Batman: Year One, Arkham Asylum, and The Killing Joke. It also makes a good introduction to anyone interesting in seeing Dick Grayson’s tenure as Batman. All in all, this book stands as a successful addition to the continuing tales of Gotham’s Dark Knight. 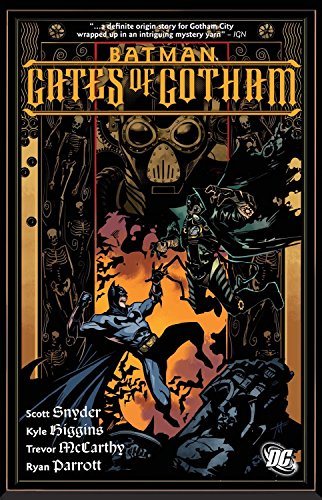