Review of Christopher Hill's Intellectual Origins of the English Revolution

Intellectual Origins of the English Revolution 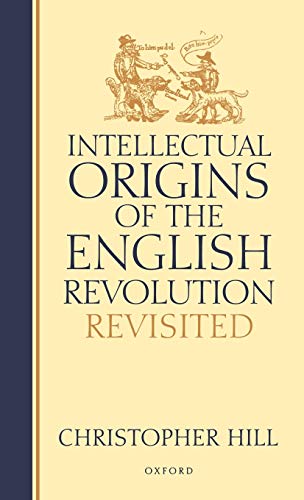 Review of Classic Book on the English Revolution

One of the biggest events in English/British history to which historians have given much thought is the English Revolution. A large body of work exists on this important event that culminated in the execution of Charles I and the establishment of Oliver Cromwell’s Protectorate. In the Intellectual Origins of the English Revolution, Marxist historian Christopher Hill argued that the English Revolution had a radical intellectual underpinning. He pointed out that ideas were an important part in causing the revolution because “a great revolution cannot take place without ideas.” (1) This may not seem a surprising assertion in some contexts, but many historians in Hill’s day argued that there was no intellectual component to the English Revolution. Hill even quoted his own writings to prove this belief. “There was no Jean-Jacques Rousseau or Karl Marx of the English Revolution.” (2) Although Marxists tended to focus upon class struggle as an impetus for revolution, Hill focused on three men with ideas that were considered radical—Francis Bacon, Walter Raleigh, and Edward Coke—and he investigated some areas of learning that changed greatly just before the revolution.

Hill began his work with a discussion of the impact of Gresham College and London science on the intellectual environment of revolutionary England. A fundamental change that took place involved questioning the superiority of the ancients. Gresham College in London, endowed by the will of Sir Thomas Gresham, led this movement and encouraged new learning in math, science, and medicine. In these subjects, traditional lecturers at Oxford and Cambridge considered the ancients such as Aristotle, Euclid, Galen, and Ptolemy as authorities. Those teaching at Gresham questioned the ancient standards and argued that more could be learned regarding the universe. According to Hill, Gresham led to improvements in English navigation and weaponry, as well as a general availability of knowledge for those of the merchant and artisan classes through public lectures. Those at Gresham attacked the privilege of medical guilds over apothecaries who were generally more knowledgeable. The guild prohibited apothecaries from practicing, because competition would have cut the cost of medical care and opened the field to more people.

The will of Sir Thomas Gresham directed that lectures be open to the public and delivered in English because most Englishmen could not understand the Latin used at the universities. The democratization of learning was a threat to Oxford and Cambridge, as well as the king, the nobility, and the clergy, and each reacted against the threat to their esteemed place, while continuing to hold on to classical learning. In addition to the impact that public lectures had on learning, the invention of the printing press in the fifteenth century provided the ability to disseminate ideas widely and quickly. While there was still illiteracy amongst many of the lower classes in the seventeenth century, literacy was increasing. Many of the new scientists, doctors, astronomers, and mathematicians published their works in English, thereby opening these subjects up to a wider audience. Even the lower class could afford almanacs published by Gresham. These almanacs, which only cost 1d, would, other than the Bible, “often be the only literature in a small household”. (48-49) Public lectures and cheap literature improved the knowledge of many merchants, artisans, and lower class individuals.

After his discussion of Gresham College, Hill looked at three individuals who were important players in the promotion of new knowledge. While he argued that others were influential, even mentioning some in his book, Hill emphasized the contributions of Francis Bacon, Walter Raleigh, and Edward Coke. Each of these men synthesized previous radical thought, and the Parliamentarians used their works as an intellectual foundation for revolt. Bacon was not novel in his ideas, but he served to popularize the scientific method, which established facts through experience and experimentation. The popularity of the scientific method led to a decline in thoughtless acceptance of classical thinkers, and the application of these ideas to political though was not a huge leap. The classical view held that kings and nobles could rule most effectively and that professors and clergymen were the font of all knowledge. Conversely, the scientific method allowed the questioning of conventional wisdom in these areas and threatened the monopoly of those in power. Nicholas Copernicus and Tycho Brahe were among Bacon’s major influences in astronomy, and the church often censored their works because they challenged the establishment and their ideology. However, because the new scientists were right in their calculations, many accepted the assertions of these astronomers. In addition to his popularization of the scientific method, Bacon influenced the founding of the Royal Society that promoted scientific discovery, even though it led to the decline of Gresham College.

While he also studied science in relation to maritime endeavors, Sir Walter Raleigh argued against the cyclical nature of history that led to pessimism. He refused to look to the past as a “Golden Age.” (184) Rather, as an English patriot he argued that England could improve and expand. Raleigh also emphasized secondary causes to explain the history of the world. While God remained the primary cause of all that happened, Raleigh’s emphasis on secondary causes and their actions led to accusations of atheism, which the clergy saw as a major threat. In his History of the World, Raleigh argued that the upper class tended to cruelty, and that “social rank is ‘but as the change of garments…every man wears but his own skin, the players are all alike.” (194) This leveling attitude in The History of the World, along with the same assertion in The Prerogative of Parliament, tended to question authority. These works by Raleigh greatly influenced the Parliamentarian cause during the Revolution.

Coke wanted to revise the common law for the good of the general populace so that there was fair treatment. The revision of common law along those lines would cut down on the privileged status afforded to people of means. According to Coke, monopolies and guild privileges held back trade. Coke argued for free trade as a stimulus to England’s prosperity. His writings brought into question the role of traditional powers like the king and nobility because it was the king’s prerogative to grant monopolies to specific merchants. A call for free trade argued against this right, and threatened monarchical power. Bacon, Raleigh, and Coke all ran into trouble with the king over their views, which led to imprisonment, censorship, and/or death.

In discussing the views of his major players, Hill used their writings extensively. He also discussed the large number of Parliamentarians who read or cited their writings. Hill mainly focused upon the impact of radical thought upon the merchant and artisan class, which indicated that he viewed the English Revolution as a bourgeois revolution, rather than a revolt of the lower classes. The thinkers that the revolutionaries cited died years before the revolt itself, so the impact on the masses at the time of the Revolution was difficult to assess.

Hill’s work had some weaknesses. While Hill discussed new knowledge and radical ideas, it was somewhat surprising that he did not really discuss the economic transition from mercantilism to capitalism in much detail. While the Industrial Revolution related more to the eighteenth century, some capitalist tendencies existed in the seventeenth century and Hill could have investigated any evidence of class struggle. Economic ideas received little attention in The Intellectual Origins of the English Revolution. Hill rarely mentioned the lower classes, which was somewhat surprising for a Marxist. However, capitalism had not yet supplanted mercantilism, so a wage laboring proletariat was not as common as it would become during the Industrial Revolution. Another problem with Hill’s study is the time lapse between the writings of Bacon, Raleigh, and Coke and the outset of the Revolution several years after their deaths. James and Charles attempted to reign as absolute monarchs for nearly forty years before the English Revolution, and most of the revolutionary writings appeared either just before or just after James’ accession.

While Hill argued that there was an intellectual underpinning to the English Revolution, a more in-depth discussion of Puritan theology would have been appropriate. While the Puritans were elitist in their view of election, they had democratic tendencies when it came to their polity. They challenged the power of the bishops, who viewed this challenge as a threat to the established order. However, it should not be surprising that Hill omitted Puritan theology because of his standing as a leading British Marxist historian. The Marxists viewed Puritans in terms of their class standing, rather than basing their assessments on religious beliefs. Perceived as members of the prototypical bourgeoisie, the Puritans had more concern over their wallets than their souls, according to the Marxist interpretation. Recent historians have not been as quick to dismiss the purely religious element of the Puritans.

Hill actually discussed some of the weaknesses of his work in the conclusion. Two of the major omissions in his mind were the place of women in the revolt and of Puritanism as a religious movement. The place of The Intellectual Origins of the English Revolution in the historiography differed from those who argued that there was no ideological origin to the revolution and more recent historians, such as Nicholas Tyacke, who have argued that a Calvinistic Puritan backlash against Archbishop Laud’s encroaching Arminianism caused leaders such as John Pym and Oliver St. John to revolt. In spite of these weaknesses, Hill is still widely regarded as one of the most influential historians focused on seventeenth-century England.

Review of Hill's Century of Revolution