Review of "Fall of Giants" Book by Ken Follett

Welsh author, Ken Follett, has been publishing epic novels for many years. Since 1978, he has delighted his readers with a number of international best-sellers such as Eye of the Needle and Pillars of the Earth. Many of his books have been adapted to the screen, including The Key to Rebecca and World Without End.

Recently, Follett embarked on another historical fiction trilogy. In September 2010, he published "Fall of Giants," which explores the global political atmosphere in the early 20th Century. The nearly 1000-page book covers the lives of five fictional families in Europe, Russia and America as the world was gradually drawn into World War I - the Great War.

History buffs and fans of the show

Downton Abbey will love this book, which is now available as paperback, as well as in audio and in e-book format. Despite its potentially daunting length, "Fall of Giants" is a quick, engaging read. Follett is a master of storytelling, drawing the reader in immediately with his intriguing fictional characters set in the midst of real-life, historically accurate settings.

I learned more about the time period from 1911-1924 than I could have by memorizing history books. Follett painstakingly researched the facts for the backdrop against which is story is set. No fewer than eight history professors reviewed the manuscript for accuracy!

"Fall of Giants" is both educational and entertaining. I gave the book a rating of 5 stars. If you have read and enjoyed this book, be sure to cast your vote below.

What is the Book "Fall of Giants" About?

The title "Fall of Giants" refers to the transition from aristocracy and monarchies to a new society and new forms of government in the early 20th century. At the beginning of the book, King George V is crowned in England in 1911. Thirteen years later, when the book ends in 1924, he is the only remaining European crowned head of state.

The story is centered on five fictional families involved in intriguing plots involving infidelity, class struggles and family drama. But Follett's backdrop is perhaps the most compelling. It includes accurate historical detail regarding living and working conditions, working class struggles and the privileged aristocracies, progression toward early women's rights, and the stubborn arrogance of world leaders which transformed a Balkan conflict (arising from the assassination of Archduke Franz Ferdinand in Austria) into a full-fledged World War that resulted in the loss of over 16 million lives and ended with the controversial Treaty of Versailles.

When you first start this book, you may be overwhelmed by the "Cast of Characters" set forth for reference at the beginning. Yet, before long, the interconnections between the lives of a poor coal miner and his sister who works as a maid in Aberowen, a British aristocrat and his Russian princess wife, the aristocrat's liberal, forward thinking sister, a German spy, an American law student, and a pair of young Russian brothers, orphaned during the pre-revolutionary years are woven together.

Fall of Giants moves seamlessly between each storyline which both draws the reader into the minute detail of the individual sagas, but also provides a "bird's eye view" of the impact of the Great War on all countries involved.

World War I is brought to life in a way that history books simply cannot convey. Fictional characters are present in real-life scenes that changed the course of history forever. Follett masterfully places a number of compelling fictional stories against an accurate historical backdrop. Winston Churchill, Woodrow Wilson, Lenin, Lloyd George and other figures appear throughout the book, lending a "real life" feel to the stories that draw the reader through history. Follett employs accurate and confirmed characteristics in describing these real-life characters, lending additional authenticity to the storyline.

At the end of the book, you cannot wait for the second book in the Century Trilogy!

Trailer for Fall of Giants Book by Ken Follett 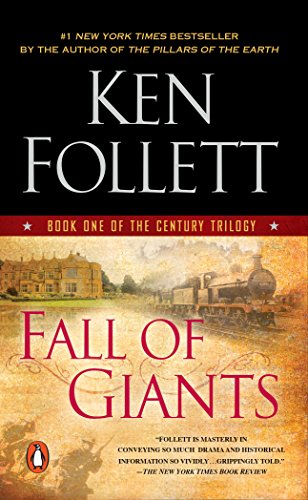 Fall of Giants: Book One of the Century Trilogy
Buy Now

Accolades for "Fall of Giants" by Ken Follett

If you did not score high marks in history class, do not worry about getting lost in Ken Follett's books. In "Fall of Giants," Follett includes ample background detail to set the historical stage, as well as impart a civics lesson to his readers without coming across as a teacher.

Indeed, this is one of my favorite features of Follett's books: his ability to draw you into the books, learn some history, and enjoy it all at the same time. The fictional characters in "Fall of Giants" are realistic, and have been carefully and accurately placed in "real life" scenes to lend additional credibility to the tale. Conversations are very realistic, without feeling strained or contrived.

The bottom line is that "Fall of Giants" is engaging and a page-turner through the entire 1000-page book. You will probably breeze right through the tome, despite its massive length. I finished Fall of Giants in a single long weekend!

Ken Follett and Fall of Giants

Ken Follett and "Fall of Giants"

Criticisms of "Fall of Giants" Book by Ken Follett

As much as I loved this book, "Fall of Giants" is not a literary masterpiece. It is an engaging story through which you may gain some appreciation of the struggles endured by Europeans and Russians in the early 20th Century. It could be a book club selection, but it lacks the artistic, unique qualities of scholarly literature.

My second criticism of the book is that it is not appropriate for people under the age of 18. As much as I would love my teenaged sons to read this book to learn about World War I, there are sexual and violent scenes that would garner an "R" rating if the book was made into a movie.

Don't let these criticisms dissuade you from reading Fall of Giants, however. I loved the soap opera-style and the engaging story line. Ken Follett also does a commendable job researching historical facts. As a result, readers can learn a bit of history by reading his books.

If you have read "Fall of Giants," be sure to rate the book and leave a comment below!

Have You Read any Books by Ken Follett?