Set several hundred years in the future after humans have colonized multiple planets, the story follows Earth native Tam Olyn who dreams of joining the News Service to have the freedom to go wherever he wants. During a visit to the Final Encyclopedia—a project on Earth designed to collect human knowledge—Tam discovers he is a rare individual of great importance. He rejects the responsibility this designation would place on him, and he intends to use his influence and ability to manipulate people to advance his own self-interested goals. When he fails to save his brother-in-law while reporting in a war zone, Tam sets out upon a long-term plot to get revenge by destroying the whole culture of the strictly religious and uncompromising Friendlies that Tam blames for the murder of his brother-in-law.

Theories in the Stars

The most obvious thematic element is the philosophy of Tam’s uncle, Mathias, which boils down to one word: Destruct. Tam blames this fairly nihilistic outlook for his unhappy childhood and his desire to be free from all constraints. As much as he rejects this philosophy, he comes to embody it through his actions in half the novel as he attempts to set up the annihilation of an entire culture. The whole movement of Tam’s characters in some ways sets up a cautionary tale of how someone must avoid becoming the thing that he or she hates. Tam wants freedom but enslaves himself to hatred and revenge, just as he wants to reject his uncle’s philosophy but expends so much effort essentially reinforcing it.

Another driving force in the novel is the importance of faith. For instance, Lisa, the assistant to the Exotics, has faith in Tam. When Tam learns of his potential, Lisa is there and holds out hope that he will use his talents to continue the construction of the Final Encyclopedia and advance all humanity despite no evidence to support such a belief. Tam rejects this in favor of his own pursuits, and even as he continues with a plan to ruin an entire world, Lisa infrequently reappears to voice her belief that Tam is a good man who will make the right choice. Padma the Exotic points out to Tam that Lisa was one of the few people who held this belief (Dickson 220). Similarly, the single-minded religious devotion of the Friendlies is the quality Tam comes to abhor so much that he believes their whole culture must be eradicated. If the reader can see through Tam’s narrative bias, though, the faith of the Friendlies is revealed to be more ethically neutral quality than Tam understands it. This faith and unquestioning adherence to their orders can have negative consequences such as the execution of Tam’s brother-in-law, or it can lead to brave self-sacrifice to save the lives of others (100, 203-5). Their faith is an element that exposes the quality of the person using it, similar to Tam’s ability to read and manipulate people.

Trouble in the Galaxy

Though not particularly lengthy, the book often seems much longer. Part of this comes from Tam’s narrative voice going on for pages at a time, doing more telling than showing. This telling often happens in extended interior monologues, and a reader might think these would decrease in frequency as he or she gets farther into the book. Unfortunately, they do not, and the rhythm of the narrative seems staccato. This stuttering pace also contributes to the delay in getting at the main thrust of the narrative. It takes half the book before Tam begins to take any real action, and even then Tam’s purposes are essentially genocidal. It would be easy to see where a reader would be frustrated by waiting for so long for something substantial to happen only to discover the main character is really the antagonist of the novel.

All those bothersome factors also contribute to the general impression that Tam isn’t a likable character. It is difficult to even classify him as an anti-hero. His lust to not be weighed down by external burdens becomes tiresome in that he sounds more like a self-righteous complainer than anyone who has suffered a lifetime of grievous injuries. It’s also difficult to see how he is redeemed at all by the end. He’s spent nearly half the novel trying to destroy a culture and its people only to fail. Then he has another encounter with Padma who convinces him of the wrongness of his pursuit and to instead focus his efforts on the Final Encyclopedia, which will benefit all humanity. This movement at the end will be unsatisfying to some readers not only because of Tam’s seeming lack of punishment for the all the destruction he’s helped set in motion but also his change in heart doesn’t really sound like a redemption of his characters.

View of the Future

Essentially a tale of Tam’s attempt to gain revenge, Dickson’s Soldier, Ask Not is an occasionally engaging novel that is often more interesting when dealing with the encounters with the various human groups that have colonized various planets than when the protagonist/narrator forces the reader to follow along with his selfish and destructive goals. 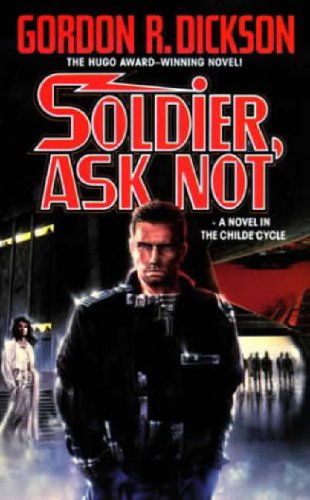