Originally compiled in the thirteenth century but taking place hundreds of years before, Laxdael Saga is the generational account of several families that were among the first inhabitants of Iceland.

The early parts of the saga chronicle the Norse chieftain Ketil Flat-Nose and his descendants as they leave an increasingly hostile Norway to settle frontiers in Iceland. Many of these stories seem unconnected at first, jumping from one family member to another, and even sometimes to neighboring settlers. These sections do give the lay of the land, so to speak, and eventually lead to birth and life of Olaf the Peacock. It is Olaf the Peacock who carves out fertile territory in which much of the rest of the saga will take place, involving his descendants after he wins acclaim abroad in both Norway and Ireland.

The last two-thirds of the saga mostly center around a woman named Gudrun and her four marriages. After a brief but profitable marriage, she divorces her husband and marries another, who dies on an ill-fated sea voyage. She then comes to love the hero Kjartan, a descendant of the famed Olaf the Peacock. When Kjartan is held hostage in Norway, his foster brother Bolli returns to Iceland and convinces Gudrun to marry him instead, claiming Kjartan will be away for years and is likely marry a princess in Norway. Gudrun consents, but a year later, Kjartan returns, finds Gudrun married to his best friend and foster brother, and distances himself from them both, marrying another woman. Kjartan showers her with the gifts he received during his time in Norway. Angered by the coldness of her former lover and the duplicity of her husband, Gudrun forces a series of social confrontations that pit the men against each other until, in order to restore his pride and social standing, Bolli is forced into an ambush against Kjartan, who seeing his foster brother is his attacker, refuses to fight and is cruelly cut down. Though he is remorseful, Bolli maintains he had a right to vengeance, but that does not prevent Kjartan’s kin from tracking down Bolli and killing him in return. Widowed, Gudrun raises her sons, who demand retribution for the murder of their father. A wealthy man named Thorgils covets Gudrun, but this time she is the one to engage in deception as she promises him she’ll not many another man in Iceland if Thorgils helps her sons get revenge. He does so, not realizing she has deceived him and will instead marry Thorkel, a respected merchant who is currently not in Iceland but sailing on a trip. After Bolli’s death is avenged, Thogils understands too late he’s been tricked, allowing Gudrun to marry Thorkel, whom she preferred. At a gathering of Iceland’s leaders, the vendetta is settled, and the remaining characters grow old as Christianity takes deeper root in Iceland.

It may come as a surprise to many readers that the protagonist of much of the saga is a woman, Gudrun, and that she is a flawed character. Her jealousy leads to the death of the heroic Kjartan at the hands of his foster brother, and she, with some help, goes from being a character that is manipulated by others into a manipulator of others. This story exists, strangely enough, alongside works like Beowulf, The Song of Roland, and Poema del Cid, which all showcase masculine power and virtues. Though she is the central example, the saga has several other women that take center stage, such as Melkorka, the mother of Olaf the Peacock. Though they do not have the same social standing as men, the female characters prove their power and influence, usually be being the author of their own decision-making or by manipulating the pride and fragile egos of men, provoking them to action they might not otherwise take. It is similarly interesting to watch Gudrun make her choices and live with them. As the saga nears its end, Bolli Bollason—the son of her murdered third husband—visits her and asks which man she loved the most. After some evasion, she answers cryptically with, “I was the worst to the one I loved the most” (238). The response satisfies her son, but for the reader the answer is open to interpretation, especially given how the reader may judge her deeds.

At one level, the saga is nationalist epic, depicting story of Icelandic settlers as hardy, independent people. They resist the lordship of others, and there is a clear strain of bitterness against the Norwegians who start the saga as oppressive tyrants, forcing Ketil Flat-Nose and his people to flee in the face of assimilation or destruction, and their reputation does not improve much as they hold Kjartan hostage and essentially forcibly convert the people of Iceland to Christianity.

While much of the saga reads like a retelling of history, it is also replete with supernatural elements. The vengeful, shape-shifting ghost of Killer-Hrapp (78-81, 100-3), Kotkel and his family of outlaw sorcerers (130-9), the prophetic power of dreams especially in relation to Gudrun’s marriages (115, 119-120), and a variety of other fortune-telling scenes all are important to the story as a whole, and give insight into the belief systems of the Icelanders. It all convinces the reader that the setting is a wild, untamed place where strange and magical occurrences should be seen as a legitimate part of the fabric of the world.

Hammer of the Gods

Laxdaela Saga is a strange, yet moving tale that is well worth reading, especially to anyone interested in Norse tales or literature from the Medieval era. The early sections with their seeming lack of direction may prove confusing for some readers, and some descriptive conventions can become tiresome. The central stories of Olaf the Peacock’s adventures and Gudrun’s four marriages provide an enthralling tale full of human passions. 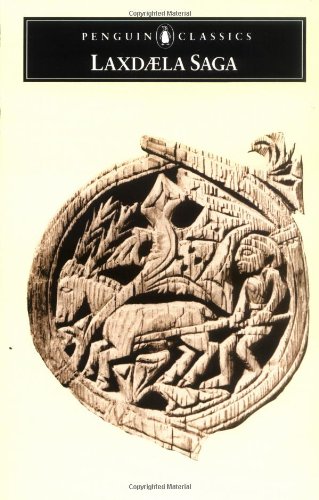