Deacon of the Order, Sorsha Faris, is given a task she thinks is beneath her. Forced into a new partnership with the untested Merrick—a Sensitive who can see ghosts, auras, and supernatural creatures—she is dispatched to the distant town of Ulrich where a Priory has reported an increase in paranormal activity. Sworn to eliminate geists and all malevolent spirits, she goes under some protest into a precarious situation.

Raed Rossin, Pretender to the Throne and a man on the run, is also on his way to Ulrich. With its out-of-the-way port, it is one of the few places he can sail to with his remaining followers. Subjected to a curse that can turn him into a vicious beast in the presence of a geist, Raed has tried to stay ahead of the king’s killers, bounty hunters, ghostly spirits and the deacons, but he is unaware that Sorsha and Merrick are on their way to the same town. What all three of them find there is an apocalyptic conspiracy that has actors manipulating events on both sides of the grave.

An interesting aspect of the book is that it has three protagonists, and each protagonist is a narrator. Also, each one has a different voice, meaning the reader learns to have different expectations of each character. Raed, for instance, is not learned in the techniques of magic, is sometimes a helpful stand-in for readers who will also be unfamiliar with how arcane systems work in this book. Different protagonists also mean the action can be spread out, and each character has a chance to showcase his or her talents. All of this creates a thematic undercurrent of the value of building relationships, trusting others, and finding strength in diversity.

The action set pieces are quite well done, and toward the end of the novel there is a moment that recalls similar events and themes from Michael Moorcock’s novels, where analogous convergences happen in the Elric Saga or The King of Swords. In this instance, Ballantine creates a worthy homage and links her novel to the tradition of heroic fantasy fiction. There a sense of momentum and danger that builds through a good chunk of the novel, which keeps the characters and the reader in motion.

Some aspects of the world in which Geist takes place could use additional explanation. Readers learn from a Sensitive that they, and presumably at least the deacons of the Order, know there is an afterlife with certainty (146-7). There’s no need for second-guessing or even faith in an abstract sense. The real question becomes why don’t they have different cultural attitudes toward death instead of standard fear (228). Especially the deacons empowered by their arcane talent and knowledge should embrace dying with they sort of acceptance displayed by a character like Obi-Wan Kenobi in Star Wars.

A few plot points are troublesome, too. Control of the Rossin—the cursed beast that Raed becomes in certain circumstances—seems far too convoluted and too contingent on outcomes that could not be predicted, even given the explanation of how the arcane Possibility Matrix works (246-7). No conspiracy would waste time and resources when it could simply entrap Raed in any port and use a deacon already loyal to the conspiracy to bind its power for their own ends. The prolonged set up in Ulrich seems ridiculous in hindsight, which is a shame because that part of the book is actually a good bit of action that shows the protagonists using their wits to solve a complex situation. The same can be said for the plan to let the Murashev posses the Rossin (270). A scheme to create the circumstances the characters find themselves in during the last stretch of the book is implausible even with the magic in the book in no small part because the Possibility Matrix cannot account for the actions of a particular character. The rational for the action breaks down into nonsense, which again hinders what is otherwise a tense, final encounter. Unlike Ulrich, however, this conflict requires a deus ex machina rather than showcasing the talents of the protagonists, which is another disappointment.

Regarding ghostly spirits, at several points, knowledgeable characters say something along the lines of “the rules are all broken.” These proclamations might carry more weight if the audience had a grasp of those rules before they broke. As it stands, there can be confusion as to why a world that has magic that transcends death would have any limitation at all.

Also Sorsha is beautiful, and the reader will be reminded of this every time she is described by virtually any character, whether he or she has a sexual interest in her or not. A reader could also make a drinking game for every time the color of her hair is mentioned. These constant repetitions are problematic in that they slow down the reading and might even irritate a reader who doesn’t need to be told the same character traits over and over.

If someone is looking for a fantasy adventure story with action, sex and magic, Geist will make a fun and quick read. If a reader wants complex characters in a compelling and fully realized setting, though, the novel may not provide enough nourishment. Maybe the following Books of the Order do more to build the world, examine the undercurrent of colonialism and class conflict, the notion of ghostly power used to fuel industrial machines might get more breathing room as an extended metaphor, or round out the characters a bit more, but on its own Geist is a fair bit of heroic fantasy fiction. 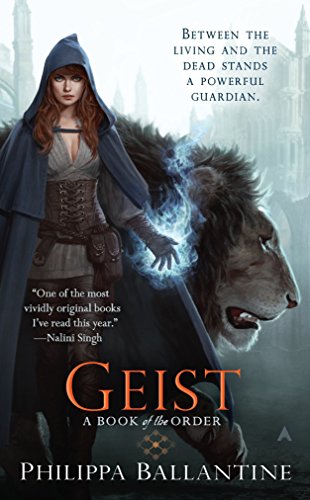 Geist (A Book of the Order)
Buy Now