In 79 A.D. the Roman engineer Attilius must contend with two problems: the disappearance of the man who previously held his position and an interruption in the flow of water in the Campania region of Italy. As he heads to the city of Pompeii to solve the water crisis, he discovers that the disappearance of his predecessor, Exomnius, might be linked not only to the trouble with the water but also to the rise of a shrewd businessman named Ampliatus. As signs of impending disaster mount—sulfur in the dwindling supply of city water, earthquakes, and drought—Attilius races to save not only his engineering reputation but also his life as sinister human forces align against him.

Readers quickly discover the novel has two main tracks it follows simultaneously: the human drama of pride, corruption, and greed that Attilius encounters in Pompeii, and the impending cataclysm that will be the volcanic eruption of Mount Vesuvius.

Attilius is a serviceable if slightly bland character devoted to his duty, but he really shines when it comes to feats of engineering, especially where Roman Aqueducts are concerned. In some ways he seems like a protagonist from a pulpy adventure serial but made more vulnerable and therefore more interesting in that he isn’t a lantern-jawed action hero. Instead Attilius must use his knowledge of science and mathematics to overcome his obstacles and solve the multiple mysteries that confront him as he unknowingly moves closer to earth-shattering disaster.

All the human action unfolds in the shadow of Mount Vesuvius. The volcano, as the story moves on, increasingly becomes a character in itself, with it’s actions dominating the climax of the novel. In this way, Vesuvius is a second protagonist following its own plot arc that is hardly perceptible or knowable to the human characters. Only characters such as Pliny the Elder begin to grasp the scope of what Vesuvius and the Earth are doing, such as when he says of the eruption, “But here was nature, sweeping toward him—unknowable, all-conquering, indifferent—and he saw in her fires the futility of human pretensions” (272). In fact, it is easy to argue that the more removed the human characters are from humanistic and social concerns, such as Pliny, Attilius and even Exomnius, the better apprehension they have of the ramifications of natural events. Whereas other characters like Ampliatus, overseer Corax, or Corelia who are all motivated by more identifiable, human impulses such as avarice, love, greed, revenge, or even self-preservation, come across as ignorant at best or malicious at worst.

On the whole the novel reads well, and good pacing and a sense of impending doom keep the plot moving forward. Only a few problems stand out. The character of Corelia is not nearly as well developed as other characters, which is problematic in that she becomes the love interest of Attilius, but she seems to have no definable characteristic aside from being pretty and longing for an ill-defined sense of personal freedom. She develops no more than that, which at the conclusion of the novel leaves her at the same place where most Disney female leads start their stories. By extension, her flatness as a character causes trouble in that a reader may not be willing to accept Attilius cares enough that he would be willing to return to Pompeii during the eruption to risk saving her. Similarly, as a primary female character, she seems to empty and without direction compared to Attilius.

Other readers may be disappointed with the novel’s conclusion as Vesuvius and descriptions of its eruption dominate the last quarter of the book. Anyone more interested in following the human events will have to wait as the characters do through hail of pumice and pyroclastic surges until their actions can continue.

Pompeii is a fairly good read, being solidly written, and as a piece of historical fiction is well researched and keeps the action grounded in the historical setting. Anyone interested in a novel about Ancient Rome that doesn’t focus on emperors and generals, or whoever wants to read an adventure set just before the eruption of Mount Vesuvius, should certainly give the novel a read. 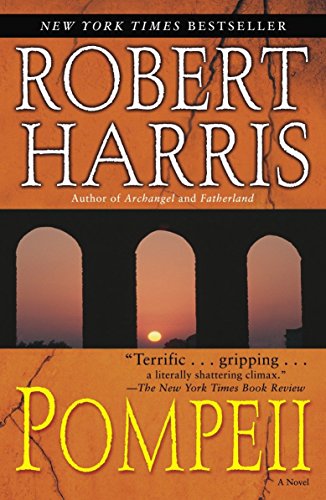